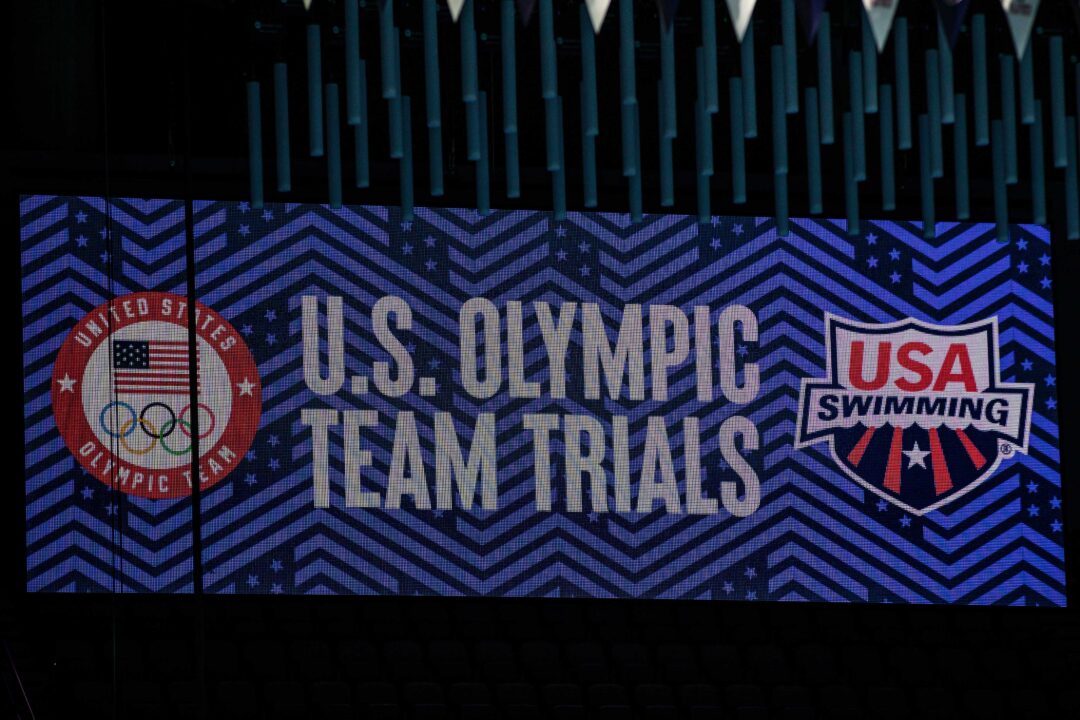 In between prelims and finals at Wave I of the 2021 US Olympic Swimming Trials, a number of swimmers tried their hand at time trial races. Stock photo via Jack Spitser/Spitser Photography

In between sessions at last weekend’s Wave I of the 2021 US Olympic Swimming Trials, there were several rounds of time trials races swum.

While athletes could not use these events to qualify for the Wave II meet, it gave those who only hit a few qualifying times the opportunity to take a taper shot at other events on the big stage in Omaha.

A top 10 age group time from Nate Germonprez highlighted the week’s time trial events. Swimming between sessions on Sunday, the 16-year old from the Inspire Swim Team in Omaha, one of the best local performers at these Trials, swam 2:02.50. That moves him into 10th-place all-time among Americans in the 15-16 age group.

That swim by Germonprez jumps him one spot ahead of 2016 US Olympian and Olympic gold medalist Gunnar Bentz, among others.

His best time of 2:04.96 coming into the meet didn’t actually qualify him for Wave I – which is what forced him into the time trial swim. That time would have placed him 3rd in the A final of the regular event, though, behind only Tristan Dewitt and Spencer Aurnou-Rhees.

Germonprez, a rising high school junior who has not yet announced a college decision, also swam a time trial of 56.02 in the 100 fly (just missing his best time) and raced just one event, the 100 back, in the regular racing. There he finished 6th in 55.75, also with a highly-ranked age group time.

His 200 IM cleared the Wave II cut, though because he didn’t place top 2 in that event, he’s still not eligible to race it at the Wave II meet that begins next week.

He wasn’t the only swimmer who time trialed a result that would have placed well in the regular race.

Rising Virginia Tech junior Sarah Shackelford put up a time trial of 55.81 in the women’s 100 free. That was almost half-a-second better than the 56.20 that she did to finish 4th in the final. Had she done that 55.81 in the final, she would have placed 2nd and advanced to the Wave II meet.

Another 15-16 who jumped up the national rankings in a time trial was Jonny Kulow from the Lander Swim Club in Wyoming. He swam 50.39, which picked off his 50.60 from early May as a new personal best in a race where he didn’t have a Wave I cut coming into the meet.

In prelims of the 50 free, his only qualified swim over the weekend, Kulow placed 20th overall in the 50 free in 23.06. That moved him into a tie for 16th place all-time in the age group.

It was overall a big week for Arizona State swimmers, both present and future – taking advantage of their decision to redshirt their entire team last season, which gave them a chance to focus on long course. Rising sophomore Alexander Gusev swam a 2:00.99 in the 200 fly in a time trial. That’s a best time for him by 1.4 seconds, beating out a swim he did just 2 weeks earlier.

A little hint for Swimswam’s staff. Last weekend there were many interesting results at Hungarian Youth Champs (at Kaposvar), but the 4.46.47 in the 400 IM from Vivien Jackl, born in 2008, was really outstanding. I don’t know if Vivien Jackl has already turned 13 or not, but – if still 12 – I think that her time is the fastest ever swum. Anyway, after the 4.50.21 swum by Summer McIntosh in 2019 and the 4.50.70 by Kayla Han a few days ago, another amazing 400 IM by a very young girl.

Thanks, I had missed it