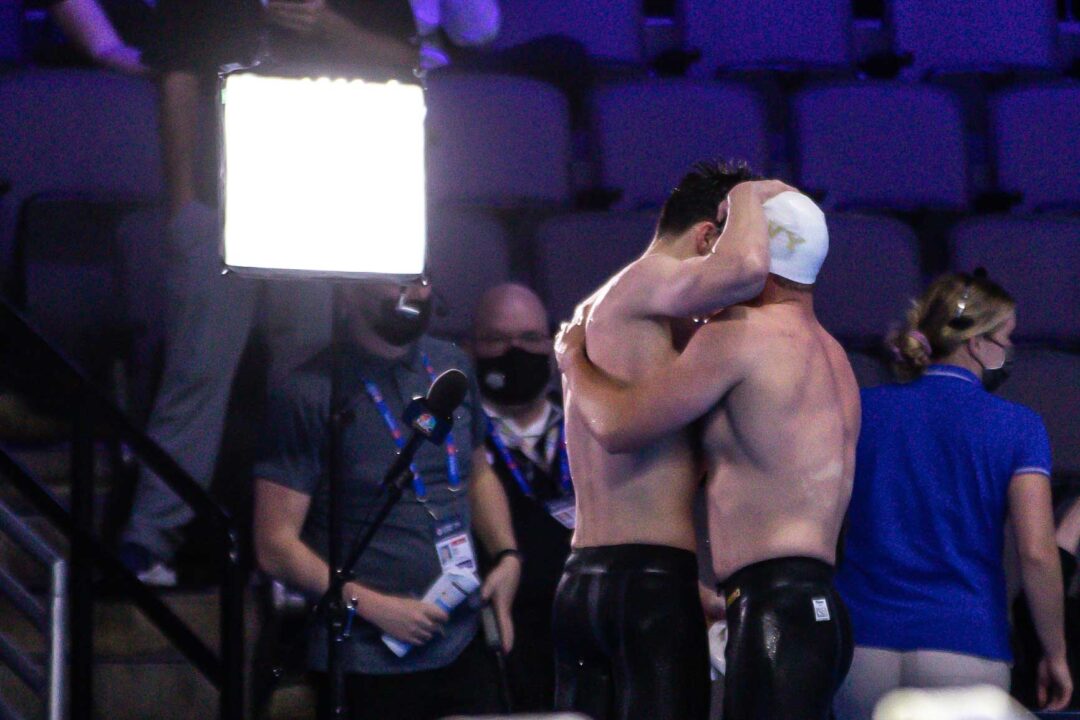 Garrett McGovern and Luke Johnson, above, were one of the best stories of the Wave I meet when they went 1-2 in the 800 free. Neither will race at Wave II. Current photo via Jack Spitser/Spitser Photography

At least 8 of the 49 swimmers who qualified forward from Wave I of the US Olympic Swimming Trials to Wave II won’t race at the second meet in Omaha.

Included among the 9 are one of the best stories out of the Wave I meet: a pair of US Naval Academy men who went 1-2 in the 800 free.

Garrett McGovern (8:11.25) and Luke Johnson (8:12.13) took the top two spots in Wave I. With 2 swimmers in each event earning a qualification forward to the Wave II meet, where faster qualifiers have been pushed automatically through, both had the opportunity to race again in the bigger show this week in Omaha.

According to Navy men’s head coach Bill Roberts, each had their own reason.

“We waited until after their 1500s on Monday night to discuss,” Roberts said. Johnson was 5th in the 1500 and McGovern was 8th.

“At that time, we decided it would be best not to accept the opportunity to advance. Carrying the taper for those two events for another week plus was going to be difficult.”

Roberts says that Johnson, who recently graduated, was “happy to finish the meet with most of his team” and will now move on to his Naval service. Naval academy graduates are required to have a minimum of 5 years of active service in the U.S. Navy.

McGovern, with his coach, decided that he was ready to move on to focus on the 2021-2022 NCAA season, and is now back home and in training.

Missy Cundiff, who won the 50 free at the Wave I meet, is beginning an auditing internship at Grant Thornton on Monday. She entered the Wave I meet seeded 46th, and her coach Nate Kellogg says that winning “exceeded her expectations.”

“Missy’s mature perspective allows her to understand that swimming is a part of her life, not her entire life. Although swimming in Wave II would have been a amazing experience, this internship will also be a critical experience for her future beyond swimming.

“As her coach, I fully support her decision. As always, she has represented William & Mary incredibly well and I am so proud of her.”

William & Mary almost cut their swimming programs last year, but a huge push by the school’s alumni saved them from elimination. Cundiff’s “Save Tribe Swimming” video was a big part of launching that effort.

When one of the two (or in the case of the women’s 50 free, three) swimmers chooses not to accept the invite to Wave II, they are not replaced by the next best Wave I finisher.

Wave II qualifiers faced many logistical challenges. On top of having to carry their tapers forward for two weeks, they would have to make plans, and pay for, the period between the two meets, and find last minute travel and lodging in Omaha – which became substantially more expensive once teams for the College Baseball World Series were announced.

Wave I to Wave II Qualifiers who Chose Not to Enter (Projected Seed based on Wave I time):

4/8 are 800 free. What does that say to you USAS, all knowing, all powerful, already talking of keeping Wave 1. We appreciate this option due to covid, but please no no no no no.

I once had a top 16 ncaa swimmer and OT qualifier say to me (when asked if he was going to stay on an additional year for trials) “laughs….no. When you know you know.”

Implying, he was eager to get on to life and what the next chapter brought.

That was another year…this is another week. But you get the point.

Perspective immediately changed. I got it.

Proud of the U.S. Naval Academy swimmers moving on to serve their Navy commitment! Life goes on. Well done! USNA Swimmer, Class of 1995

Interesting question. Do these spots now go to the 3rd or 4th place finishers at wave 1? Similarly to how Michael Phelps withdrew from the 200 free in 2012 and the 2nd spot went to Rickey Berens individually?

Maybe I’m not seeing things from the proper perspective. Why swim in the Phase 1 A Finals if you were not going to Phase 2??? It seems pretty selfish to me. Help me see another perspective besides getting a PB.

Because it may be the only olympic trial final they will ever swim in. Most of these swimmers have valid reasons for not going onto the next wave and it is also an unexpected financial burden for those athletes

Usa swimming is not paying for them to stay… So for some they might not be able to afford the extra week of stay.

When they qualified, there was no wave 1 and 2, just Olympic Trials. None of these swimmers chose wave 1 and ended up with unexpected decisions. Missy, for example, came in ranked 46th, not likely or expecting that she would end up 1st. She ended up in an unexpected circumstance and made a mature decision for good reasons not to go to the next meet. Furthermore, 2 girls tied for 2nd place and both have the opportunity to go. She hasn’t prevented any swimmers from going to wave 2.

You need to read Missy Cundiff’s comment above. Far from selfish. Those athletes EARNED that spot and experience.

One Navy swimmer is off to his military commitment of at least 5 years as an explosive ordnance disposal officer. His skills will be needed there more than in Wave II. But, it would have been nice to see him and his teammate swim again.

I understand for those seeded 40 and worse in a longer event, but not sure why Cundiff, for example, wouldn’t stick around to swim a mere 50 hoping to shave a few tenths off and maybe make semis? She’d be seeded 29th, that’s pretty darn good- she’d be in the circle seeded heats for prelims. And while wave 1 was great and all wave 2 is definitely much different in many ways. If it’s training and the fact that she gave it her absolute all and couldn’t muster any more, understandable. If it’s because of funding? Shame on USA Swimming for not fully compensating her to be able to stay the extra time.

I’m pretty sure this is mostly due to funding. Do not believe USA swimming pays for the swimmers to stay. I think they leave that up to the individual and their team.

I understand your points, and these were thoughts that occurred to me as well. However, I dropped nearly half a second in an event that I didn’t even expect to final in. Realistically, to make it to the semifinals, I would likely have to drop another half second. Throw in the awkward week of trying to maintain fitness and then retaper and attempting to match my best time, let alone drop more, becomes more of a feat. In regard to the cost, it’s costly to return to Wave II whether I was swimming the mile or the 50 free alike. If I had anticipated swimming a top time, I would have taken the appropriate measures of booking a hotel and… Read more »

The next Elizabeth Biesel has entered the chat.

This W&M swammer salutes you!

Thank you for the comment! So much admiration for you as a person and athlete. You have a great perspective. I wish you the absolute best in life, which is the REAL “Wave II.” You will go far …

Missy – your fans back home are so proud of you! You have been a joy to watch in the pool over several years of team swim. You made a mature decision and you have good head on your shoulders. Thank you so being a great example to the boys and girls on your hometown swim team.

The article states Cundiff had an internship waiting for her.

Off topic but are there any more press conferences taking place today? Loved watching those yesterday.

USA swimming did an amazing job at keeping the caliber of trials very high in Wave 1. These swimmers trained for their wave 1 meet and succeeded, regardless of if they take the opportunity in wave 2. Either way, congrats to these swimmers on an amazing meet in wave 1.

I am a wave 1 swimmer and I stand with my original comment. Yes they did an alright job but to say it is trials is false. Everyone at wave 1 trained so hard for the experience of going and watching their favorite athletes and friends make the olympics. By departing the waves and not paying for the swimmers who then requalified they took that opportunity away

THIS^^^!!!! As another wave 1 swimmer, I can honestly say that the experience was highly disappointing proportionate to the amount of hard work we all put in.

They had the opportunity to swim a final in a televised Olympic trials. I think that’s huge. And I get it, you sacrifice a lot, you train so hard and of course it’s disappointing that you’re not swimming in a warm-up lane with your idol… but in the situation that we are in, this was a small sacrifice. The alternative would have maybe been not letting the Wave I swimmers compete at all. That would have been a lot more disappointing. You’re allowed to feel sad and even be mad about it, but to publicly voice this and then double down on it when there literally millions of people who have died from covid in the last 18 months and… Read more »