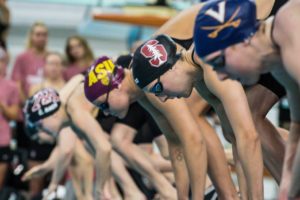 Louise Hansson lifts all the Trojan relays considerably, but a DQ and three 9th-place finishes sapped them considerably last year.

The senior, who is arguably the most versatile swimmers in the country, was 2nd in the Pac-12 in the 500 last year, but dropped it at NCAAs.

This would be Hosszu’s 2018 debut. Other Olympians on the psych sheets include Tom Shields, Ryan Murphy, Kathleen Baker, Abbey Weitzeil, Vlad Morozov, and Anthony Ervin.

Junior Riley Scott was arguably the most impressive swimmer of the meet, taking 3 wins individually.

USC has only a small freshman class, but blue-chip breaststroker Margaret Aroesty has potential to become a bona fide star.

Canada’s Mary-Sophie Harvey, who has had a great meet so far, is opting out of the 800 free on day 3.

#14 Caitlin Tycz from Long Reach Swim Club in Maine has made a verbal commitment to the USC Trojans for the fall of 2017.

National age group record-holder Maggie Aroesty has verbally committed to swim for the USC Trojans in 2017-18.