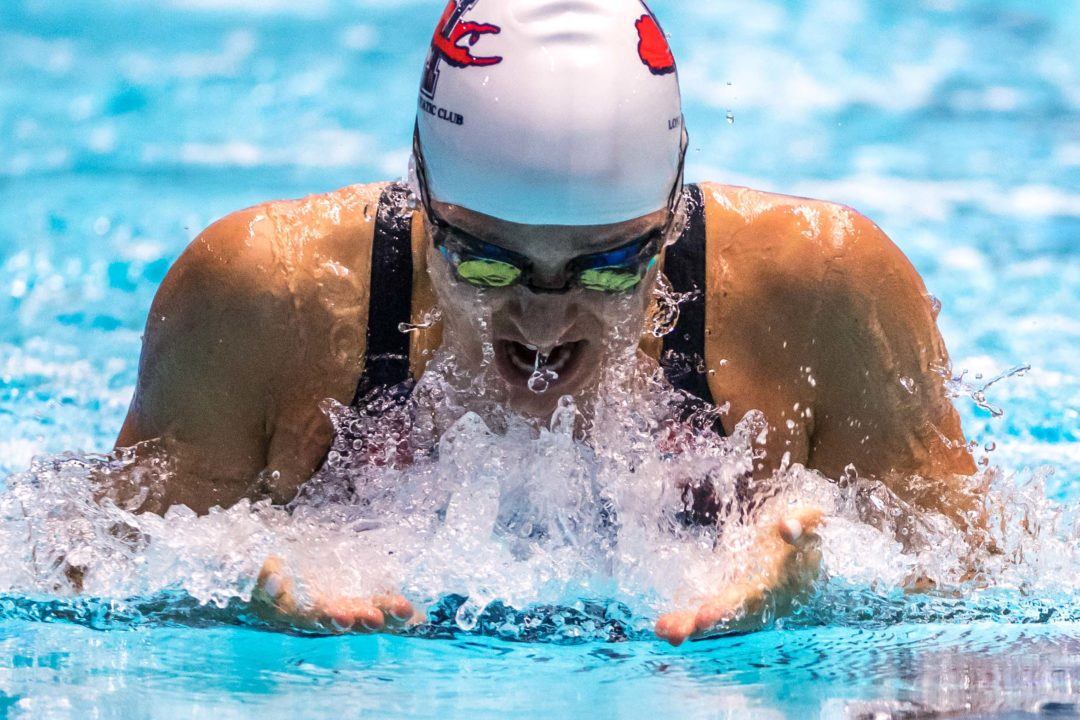 Swedish sprinter Louise Hansson was excellent in her first SCY season, contributing huge points and relay advantages to the USC Trojans. Her highlight of the 2017 NCAA meet was a field-best (and one of the best, ever) 49.78 fly splits on USC’s 7th place 400 medley relay, while she finished 3rd in that race individually. Hansson was also an A finalist in the 200 IM, and she won the 100 free B final to bring in 37 points all on her own across her three events.

Maddie Wright was the only other A finalist individually for the Trojans, putting up a 5th place finish in the 200 fly. Sophomores (now juniors) Riley Scott and Kirsten Vose each scored in the 100 breast, while Anika Apostalon scored in the 50 free and was an essential relay piece in the sprint free. Becca Mann chipped in a B final swim in the 500 free, while Scott also eked out a point in the 200 breast, as USC finished top 10 in the nation at 9th with 176 points.

Apostalon graduating is a tough hit, and Stanzi Moseley transferring to Tennessee doesn’t help much, as they made up half of the 200 and 400 free relays last year at NCAAs. Apostalon was also an individual scorer in the 50 free.

Still, Hansson would likely score in the 50 if she wasn’t already doing the 200 IM, and she’s a probable A finalist next year in the 100 free. Hansson is also very strong in the 200 free, making her a weapon on all three free relays. Returning with Hansson is Vose, primarily a breaststroker/IMer, who can put up strong free relay splits when needed (she was 47.4 on the 2nd leg of USC’s 2016 NCAA champ 400 free relay).

Freshman Marta Ciesla has been 22.4/48.9, and could certainly develop into a valuable sprint freestyler for USC. Even if she doesn’t qualify for NCAA’s as a freshman, she’ll likely be on the Trojan’s 200 free relay straight away in her first college season.

USC could be ranked in the A range in this section, but with Hansson only doing the 100 free individually and not the 50 or 200, they have limited scoring power here, as she’s the only proven scorer on the roster right now.

Last year, Becca Mann was still dealing with a 2016 back injury that had sidelined her from nearly all of her events at the Olympic Trials. She managed to score in the 500 free, though, at NCAAs last season, despite being far off of her lifetime bests. Her best times are 4:34.77 in the 500 free, 15:45.33 in the mile, and 4:05.52 in the 400 IM, all of which are A final-worthy times. They’re all from high school, but she doesn’t have to get to those times to be dangerous for USC.

Juniors Allie Wooden and Elizabeth Stinson could score in the mile, with bests of 16:08/15:59, respectively. Stinson is actually already in scoring range with that time, while Wooden would have to take a few seconds off. In the 500, Tatum Wade went a lifetime best 4:41.12 at 2017 Pac 12s, which isn’t far off of what it took to score nationally last year.

Freshman Isabella Rongione has been 4:43 in the 500 and 16:07 in the mile, though those times were from the 2014-15 season. Some progression from Rongione and Stinson in the mile gives USC four potential scorers nationally, though Mann is a big question mark, which makes it harder to rank USC higher in this since she’s by far their best distance swimmer.

There’s a fairly strong chance that Hansson will score in the 200 IM A final again, if she swims it. The 200 IM could end up being a really big event for USC– Vose scored in the A final in 2016, but was far off of her times at the 2017 NCAA Champs. An on-form Vose would give USC two probable 200 IM A finalists, which would be huge. Wade, too, has potential there– she’s been 1:56.29.

In the 400, a recovered Mann would be a big scoring threat, with the potential to A final. Meanwhile, freshman Margaret Aroesty could certainly be utilized in the 200 IM. She’s been 1:57.19, not scoring level, but she’s not far off.

Hansson and Maddie Wright are a very strong 1-2 punch in the 100 and 200 fly. Both made A finals in their respective events at NCAAs last year, and as already stated, Hansson had the quickest 400 medley relay fly split of the entire field in finals. Both she and Wright will probably be top 8 again next year, which will combine for around 30 points.

Wade is a 1:56.0 200 flyer, which is nearly score-worthy, and Catherine Sanchez could do some damage, too. Sanchez had a nice summer season in long course with best times there of 59.5 (first time sub-minute) and 2:12.5, and she’s been 52.5/1:56.6 in yards. Freshman Caitlin Tycz adds even more depth, mirroring Sanchez with bests of 52.4/1:56.6, so there’s really no shortage of top tier butterfly speed on the Trojans’ roster.

Hanni Leach is the team’s top backstroker, with bests of 52.00 and 1:52.58. She’s better at the 200, but the NCAA has gotten so fast that neither of these swims would’ve gotten a finals race at last year’s NCAA Champs.

Backstroke speed is really the only thing that the freshman class can’t provide, and it’s starting to become a big need for the Trojans.

It’s hard to predict how freshmen will fare in their first seasons in college, but if Aroesty just matches her lifetime best, she will probably make the 100 breast A final, and she has a good chance to score in the B final in the 200. Vose and Scott could score in both 100 and 200, or they could both miss– it depends on how race-ready they are.

Overall a strong team, the Trojans are going to be very dangerous in fly and IM next year. Louise Hansson is the team’s star, and she is also a very good dual meet swimmer. The freshman class is one of the best in the nation, but it’s pretty small. That said, someone like Aroesty could really develop into a star, which would pay off big-time down the line.

As long as Hanni Leach is swimming well, the Trojans won’t have to worry too much about their medley relays. If they ever need a replacement, though, Hansson (who can do almost anything) popped a 51.8 100 back at the Texas Invite.

I think Stanzi Moseley should be added to the “Key Losses”

When will these previews resume?