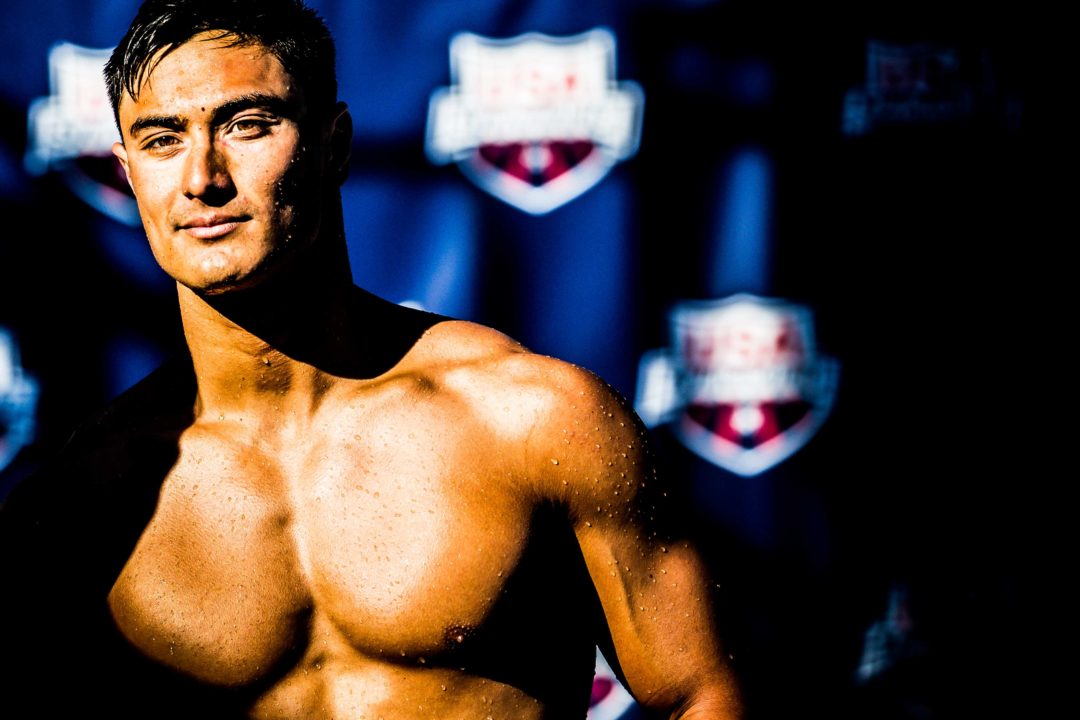 Maxime Rooney has only been faster than his Saturday 52.13 in the 100 fly at one meet: the 2019 US National Championships. Archive photo via Jack Spitser/Spitser Photography

After Carson Foster’s eye-popping 4:13.79, amid heavy training, in the 400 IM on Friday at the Longhorn Aquatics kickoff, the University of Texas freshman swam four other races this weekend in Austin.

None of those swims were as close to a best time as his 400 IM was, but all are positive signs ahead of the upcoming U.S. Olympic Trials. Both the 200 free and 200 fly times are within a second of his lifetime bests.

Foster’s event choices get more interesting with that result in the 200 free. In the process, he beat by four-tenths his training partner and fellow Olympic contender Drew Kibler, who was 2nd in 1:48.58, plus Texas post-grad Townley Haas who was 6th in 1:52.55. Haas had the fastest split on the gold medal winning finals relay by the Americans at the 2016 Olympic Games.

Haas is notorious for swimming much slower than his bests in-season. For example, in 2016, even just a month out of the Olympic Trials, he swam a 1:50 in the 200 meter free.

While a handful of Longhorn Aquatics high school aged females participated in the meet, the University of Texas varsity and post-grad men were the highlights of the meet.

That includes Maxime Rooney, who swam 52.13 to top the field in the 100 fly. Rooney finished the 2018-2019 season, the last complete season prior to the outbreak of the global coronavirus pandemic, ranked 2nd in the world in the 100 fly, though he didn’t make the U.S. team for the World Championships.

The 52.13 he swam on Saturday is the fastest time he’s been outside of the prelims and finals round at those 2019 Summer Nationals. In fact, of the 7 times in his career he’s gone under 53 seconds, 4 of them have been in the last two months – after he swam 52.71 and 52.99 at March’s Pro Swim Series meet in San Antonio.

Is Townley gonna make the Olympic team?! He hasn’t seemed to be in form for the past several years.

I am not sure why Townley pays $10 to swim that event. What a waste! 🙂

He can swim that in practice – just find 2 14 year olds on each side of you and try to beat them. If race is in the morning,. I bet he is asleep during the entire race. If Townley qualifies for Olympics, the rest of swimmers need to change how they preparee for big events – just follow Townley Way and relax for 360 days. Love Townley!

Don’t sleep on Rooney,he’s been 50.mid before. I got my money on Dressel 1 Rooney 2 at trials,

Townley throwing down the 1:52 to make Lochte feel good.

Forgive me, but that is truly funny.

I honestly feel the same, Townley had a great ISL championship meet breaking Lochte’s American Record and I bet he’ll be locked in for trials knowing how competitive the 200 will be, and Smith has the telltale signs of a great LCM 200 freestyler as a great 100-500 freestyler SCY. People are high on Dressel, but I just don’t know, and Zapple/Pieroni/Seli/Foster/other people I am forgetting will be in the mix

No. That was covered in a different recap: https://swimswam.com/carson-foster-hits-nation-leading-413-79-400-im-at-txla-long-course-kickoff/

Hand up, that’s my bad

Dang who’s the Drew Johnston kid? Never heard of him.

It’s David Johnston I’m guessing. He was a freshman at texas this year and broke the 17-18 Nag in the 1000y free at one of the meets this year