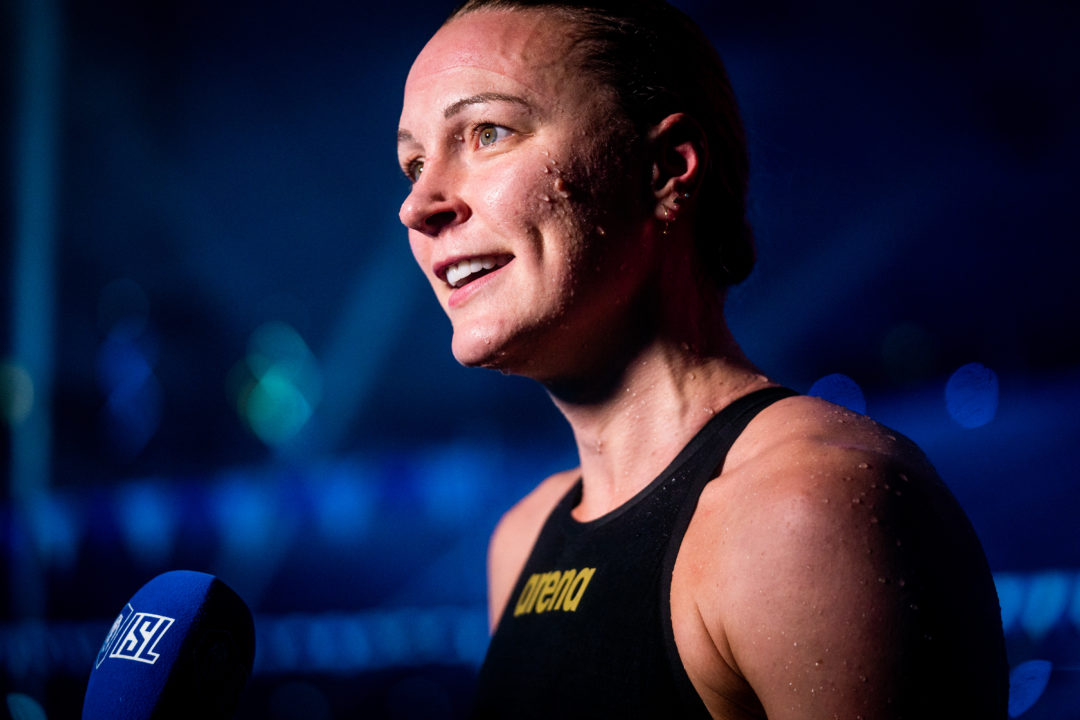 In a Q&A on her Instagram channel, Sarah Sjostrom says that she's still planning to race at the Tokyo Olympic Games after breaking her elbow in February. Archive photo via Mine Kasapoglu

Swedish swimmer Sarah Sjostrom is continuing to progress in her rehab from a broken elbow suffered in February, and confirms that she plans to race at the Tokyo Olympic Games.

Participating in a Q&A on Sunday on her Instagram page, Sjostrom says that she has begun swimming a full freestyle stroke, but “not with a very powerful stroke like I used to.”

“More powerful kick and slow frequency with my arms,” she continues on in the post, which accompanies a photo of her using her injured arm to dribble a medicine ball.

Sjostrom says that she hasn’t begun swimming butterfly yet, because the strength imbalance between her arms has made the two-armed motion difficult.

“Butterfly doesn’t work yet because I can’t press the same with both arms under water.”

Sjostrom posted several other answers to questions about her recovery. She posted a pre-injury video of her bench pressing 60 kilograms (132 pounds) for two reps, saying that she’s done as much as 65 kilograms (143 pounds). Right now, though, Sjostrom says she “can’t even bench the bar now.”

In response to what impact her injury will have on her medal chances, Sjostrom was realistic in her response.

“I know this injury won’t make it easy to get there, it’s not even easy without injuries…but a broken arm won’t stop me from trying my best!”

Other highlights from the Q&A are a picture of Sjostrom’s surgery scar on her elbow, and a favorite set from when she was fully training for the 200 free.

Sjostrom returned to the water in early March, though she has been doing primarily kicking work.

In early February, Sjostrom slipped on ice while visiting a friend, resulting in a broken elbow. A surgery to repair the fracture had her entire arm encased in a temporary cast and sling, with a metal plate and screws inserted into the elbow.

She was also the MVP of the first season of the International Swimming League in 2019. Even before her elbow injury, she was dealing with a back injury during the 2020 season, which kept her out of 1 regular season meet for the runner-up Energy Standard club.

Astonishing progress from this injury. Incredible.

There is no way she’ll be able to final. If she does, that will be a major feat, and more impressive than her various WRs, IMO (oops, offered an opinion). Tragic, but she doesn’t have enough time. She can’t come close to doing a pushup yet. She’s literally still talking to her bicep to contract when she does a biceps curl with no weight. Muscle memory? It’s gone and having to be retrained in that arm.

4
-3
Reply
NOT the frontman of Metallica

Increased kickwork and already swimming with the injured arm. I am hoping for a full focus on 50 and 100 freestyle only these games, with reduced schedule she can still have a shot at medals, even gold.

6
0
Reply
Riccardo
Reply to  NOT the frontman of Metallica

I agree. Happy as I am that Simone got the 100 Free win as an American. I can’t help but think if Sjostrom hadn’t swam 5×200 Freestyles in Rio just to get 2nd to Ledecky she would have come away with triple individual Gold in 50, 100 Free and obviously 100 Fly which she won when she was fresh.

Yes, 52.7 to be Olympic champion surprised everybody. And first of all winners: Oleksiak and Manuel. I don’t know what fresh Sjostrom could show at this race. She came to Rio with personal best 52.67 from 2014. But again 52.7 wasn’t expected to be a champion time.

Totally agree that Sweden has been burning her out championship after championship to carry teams that most of the times barely final. She could have more medals and surely more gold medals if it wasnt for relay duty.

Regardless of the outcome I admire how elite athletes speak of these injuries as training obstacle rather than obstruction. You could interchange elbow injury with a very hard training camp and no one would know the difference.

Sarah Sjostrom is a legend. She holds simultaneously 4 the most prestigious world records in women’s swimming. Her versatility is remarkable: from world record in 50m distance to the third best ever performance at 200 m distance and is comparable only to the versatility of another legend Katie Ledecky on the other side of the spectrum. I don’t know if any other lady was able to achieve the same during last half of a century. It is very sad that such a mishap happened to her during Olympic season.
But if Olympic Games don’t happen this year maybe that is good reason for her to retire remaining unbeaten. It’s anyway coming soon. And OG in Paris will be very… Read more »

Put some respect on the Swedish queen’s name

I respect her very much. I am not sure if it would be again the swimmer like her. But do you want to see her not making finals? I don’t.

The women’s 50 meter butterfly is not one of the most prestigious world records since the event is not contested at the Summer Olympics.

To my (and not only mine) taste the sprint records are the most prestigious. Maybe because my endurance isn’t that good, so i cannot appreciate it properly. But the same thing are in track&field. People like speed. A lot of them know the record in 100m distance and not that many in let say 10K distance.
Butterfly is the second fastest stroke and Sjostrom’s record in 50fly will have probably the longest life among her other records. Not mentioning it as one of the main Sjostrom’s achievement is simply not understanding the competitive swimming.

No one asked for your opinion.

Sure. And that is the beauty of the anonymous forum. You and I can talk even if nobody asked us to do so 😀

You don’t add quality to my life, never have and never will.

The problem is that I don’t even know if you are a man or a woman. And I don’t argue with women. It maybe just my luck but in any such cases no matter how objective my arguments were they were always taken personally. And if the woman was in power there have been always the consequences. I repeat again it could be just my bad luck and I’m not going to generalise such personal observations here. But I prefer now to be on the safe side.
And what do we have here? You are associating yourself with FOUR women and the pattern going on. But now my misery quadrupled. Base on your complain of me not making your… Read more »

Did anyone ask for yours? This is a free comments board, ffs. It’s not a frickin country club. And that was like in the bottom 10% of offensive comments that have been posted on SwimSwam.

Sorry, but how exactly does she hold the 4 most prestigious world records in women’s swimming? You could say that maybe the 50 and 100 free are the most presitigious events, but how the hell is women’s 100 fly more presitigious than for example women’s 200 free/100 back/100 breast and how the hell is a non-olympic event like the 50 fly more prestigious than ANY olympic events?

Sorry for frustrating you, but we have different taste. For me the butterfly stroke is a very powerful and fast one. And I prefer it to let say breaststroke.
Yes, Peaty is fast and unique, but if I in the mood to watch historic races I would go with Phelps butterfly rather than with Peaty’s breaststroke.
And about 50s – that is the fastest thing a human can do in the water.
But in no way I disrespect your taste. Try to understand mine in return before pushing aggressively your opinion.
Thanks.

Maybe we have different “taste”, but the way you phrased it, 100 % made it sound as if it wasn’t a question of “taste”. You acted as if it was a fact that those are the most prestigious events and that definitely isn’t true. So next time when you express YOUR OPINION, phrase it as an opinion and NOT as a FACT

Just as Sweden looked to be medal contenders in the medley relay after the improvements of Coleman, and Hansson x2, the best swimmer gets injured. A tough road back.

I doubt they will beat US, Australia and Canada, even with a healthy Sjostrom. They need a better backstroker.

Sjostrom is the the only sub 1 minute backstroker, but I don’t like the Swedish team have the confidence putting her on back as she hasn’t raced it in forever.

In the conversation of the Medley relay, why is no one mentioning China or even Denmark?

ps….I want Sarah to be 100% for the games…..the world deserves the best competition for these games and you can’t have a conversation about “the best” in women’s swimming if Sarah is injured or still even trying to bounce back from injury.

Because they aren’t medal contenders either.

Ottesen is dropping off she or Beckman are only 58s now. Nielsen retired I think. Pedersen is a average 100 breast swimmer (1:07)… China is a bigger threat, Zhang Yufei can go 55, they have a 52/53 freestyler. Their backstroker is very up and down though, could be anywhere from 58 to 60 and breaststroke is probably a steady 1:06…

I could not imagine trying to do butterfly with that arm injury, I imagine freestyle is a better bet, but still very difficult to get back to being competitive in a fiercely competitive Olympic year. Best wishes…

How’s Sweden’s selection process for the Olympic Games? Is she even qualified?

I hope she continues her progress. Keep fighting!

Yes every swede who swam a individual final at the 2019 world championships are preselected for Olympics.

Basically the swimming federation nominates athletes, and the Olympic Committee has to confirm them, which is not as much a given as in other countries.

Sjostrom is already confirmed to the team, so unless they rescind that (and there’s no indication they will – remembering that the Olympics are as much about marketing as sport), she’s able to use all of that time to just prep for the games.