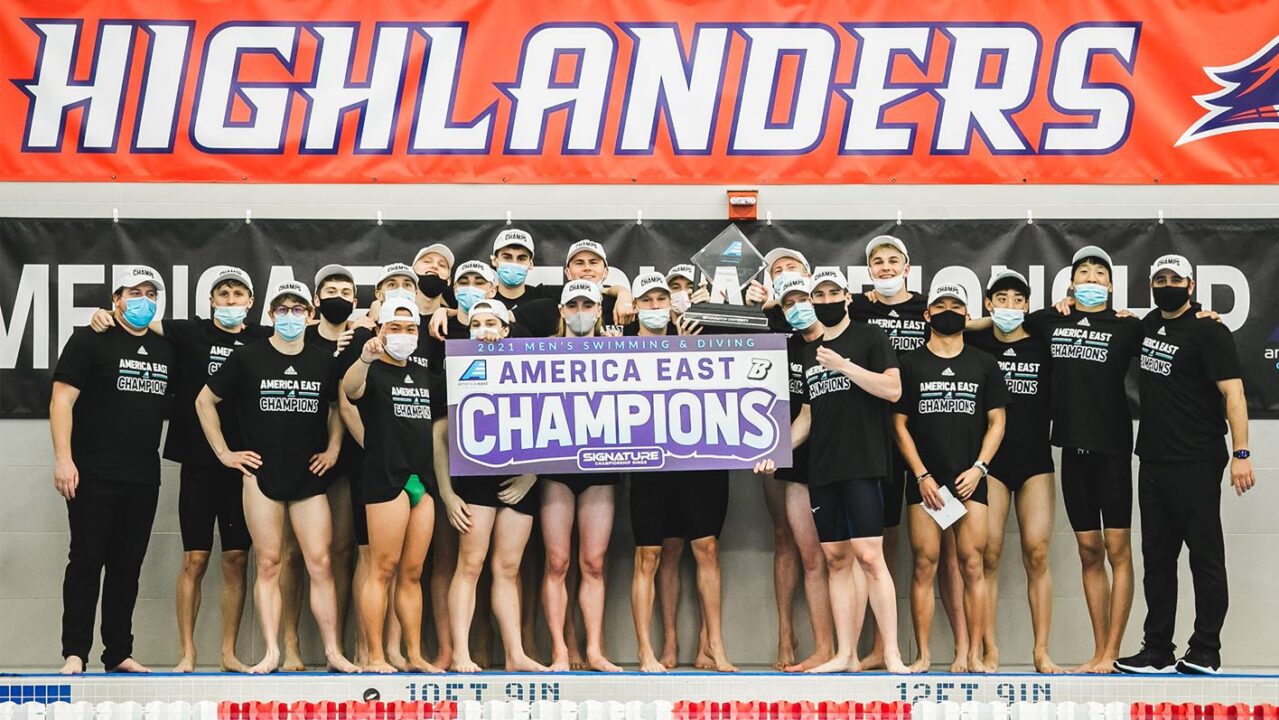 Binghamton scored 82 more points than they did last year, despite the addition of NJIT to America East.  Current photo via David O'Brien/Binghamton Athletics

The University of New Hampshire women’s swimming & diving team left little doubt on their road to their 2nd-straight America East title, racking up 817 points. The points total was less than last year’s haul of 876, however, the margin UNH won by this year was far greater. UNH won by 116.5 points over runner up UMBC last year (2020), then increased that margin to 195.5 points again over UMBC this year. UMBC made a strong push on Sunday’s session, overtaking Vermont, who had been holding strong in the 2nd-place position through the first 2 days of swimming.

UNH continued to roll with the individual titles as well, taking 4 of the 5 individual events on Sunday, as well as the relay. New Hampshire went into the 400 free relay knowing they had the America East team title locked up. Nonetheless they pulled off a win in a tight race with Vermont, completing their 5-for-5 sweep of the relays at these championships.

Anna Metzler won her 2nd individual title of the meet, taking the 200 back in 1:58.21. Metzler had won the 200 free on Saturday, then came in 2nd in the 100 back on Saturday as well. The 100 backstroke champion, UMBC’s Caroline Sargent, came in 2nd with a 2:00.77. Metzler swam a very consistent race, splitting 58.23 on the first 100, and 59.98 on the 2nd. Both Metzler and Sargent are juniors, so we may see a rematch next year, provided both women compete in the 200 back again. In total, Anna Metzler earned 6 Gold (2 individual/4 relay) and 1 Silver medal at these Championships.

UNH sophomore Jamy Lum picked up her 3rd individual title of the meet, completing her breaststroke sweep by taking the 200 breast in 2:14.19. Lum took the race out aggressively, splitting 1:03.50, which was the fastest opening 100 in the field by nearly 3 full seconds. She’d also already won titles in the 100 breast and 500 free at these championships, and was on 4 of UNH’s winning relays, making her 7-for-7 on Golds this year. UNH senior Miranda Bacon came in 2nd in the 200 breast, swimming a 2:16.93. Bacon was the 200 IM champion from Friday.

Olivia Stille, a sophomore at New Hampshire, won the 100 free on Sunday. Stille posted a 50.65, getting out to an early lead with a 24.19 on the first 50. This was Stille’s first individual title of the meet, as she came in 2nd in the 200 free, and 3rd in the 50 free. Stille was also a member of 4 of New Hampshire’s winning relays, making her total medal haul from this meet to 5 Golds, 1 Silver, and 1 Bronze.

New Hampshire also posted a 1-2 finish in the 100 free. Sophomore Paige Edmier narrowly beat out freshman teammate Hannah Devine 10:19.54 to 10:20.02. UNH’s distance fortunes are looking bright with the prospect of having this duo for the next 2 years.

The Binghamton men’s team got the job done, holding on to their lead through the 3 days of swimming, and finishing the meet 17 points ahead of 4-time defending champions UMBC. Impressively, Binghamton scored 82 more points than they did last year, despite the addition of NJIT to America East.

Freshmen took over on the final night of the meet. Starting with NJIT freshman Ian Horstkamp-Vinekar, who won the 200 back. Horstkamp-Vinekar swam a 1:46.00, posting the fastest splits in the field on all 4 50s of the race. He wasn’t done there, however, as Horstkamp-Vinekar went on to also win the 200 fly in the same session. Establishing the early lead, Horstkamp-Vinekar held on to win in 1:47.50, picking up his, and NJIT’s, 2nd title of the night.

UMBC freshman Daniel Nicusan won the 200 breast in 1:59.82. He was the only swimmer in the field who kept his final 50 split under 32 seconds, which allowed him to not only hold, but expand the lead he had established early in the race. Finishing in 2nd was another freshman: Lewis Lin from Binghamton, who touched in 2:00.69.

Another UMBC freshman, Bode Neale, also picked up an America East title on Sunday, swimming a 44.76 to narrowly win the 100 free. Neale and sophomore teammate Niklas Weigelt swam stroke for stroke nearly the whole way through the race, flipping at 21.29, and 21.31 respectively on the 1st 50. Weigelt stayed with Neale, finishing in 44.85.

With the top 2 100 freestylers in the field by over a second, it’s fairly unsurprising that UMBC won the 400 free relay in dominant fashion. Freshman Ryan Harding led the squad off in 45.99, with sophomore Gabriel Laracuente going 2nd in 45.06, then Weigelt splitting 44.46, and Neale anchoring in 44.31. The Retrievers finishing in 2:59.82, winning the race by nearly 5 seconds. Laracuente, Weigelt, and Neale were the 3 fastest splits in the field.

Binghamton’s Liam Murphy took the 1000 free, finishing in 9:20.40. Murphy took the race out faster than the rest of the field, and was able to hold that position through the end of the race.