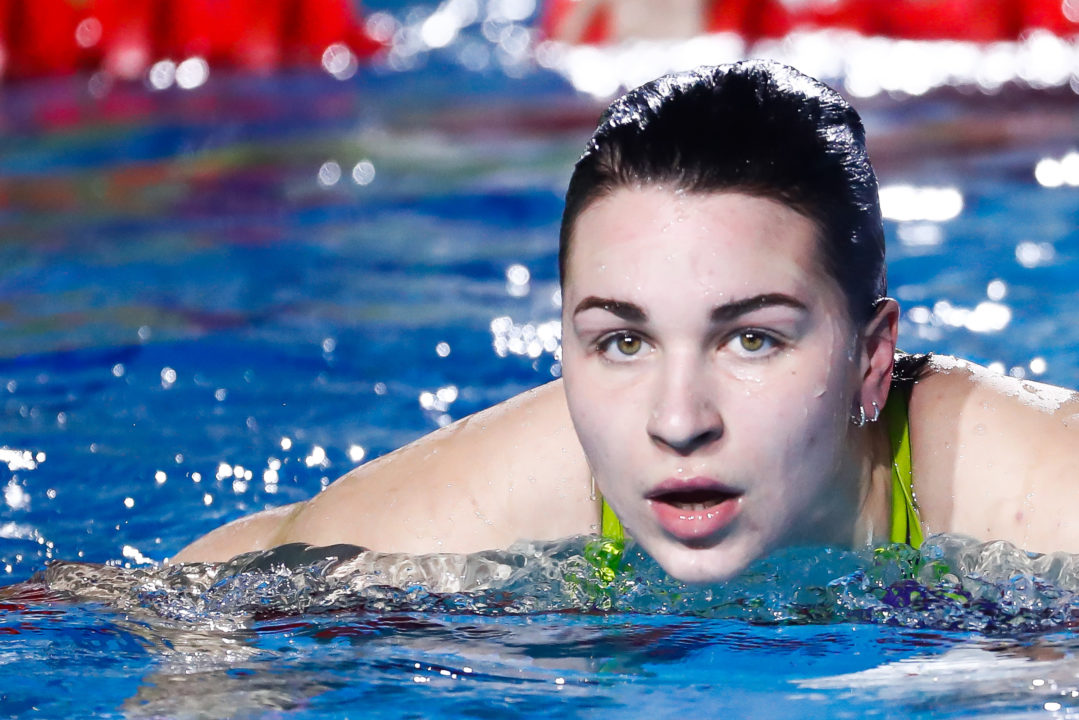 The final prelims session of these championships will feature the men's 400 IM, women's 400 free, and both 4x100 medley relays. Current photo via Istvan Derencsenyi

After 6 days of racing in Budapest, we have finally arrived at the 7th and final prelims session of the 2021 European Championships. The Sunday morning session will feature the fewest events of any session with only the individual men’s 400 IM and women’s 400 free, along with both the men’s and women’s 4×100 medley relays.

This year’s 200 IM bronze medalist, Italy’s Alberto Razzetti started things off with a win in the first heat of the 400 IM, hitting a 4:14.57. Razzetti was entered with no time in the event but has been at least as fast as a 4:21.60 in the event which he swam back in 2018, which was also the last time he swam the event in long course. Tomas Ludvik of Czech Republic and Thomas Wareing of Malta followed in the heat with a 4:32.14 for 2nd and a 4:40.16 for 3rd.

In the 3rd of 4 heats of the event, Italian swimmer Pier Andrea Matteazzi held the lead for the majority of the race but wasn’t ultimately able to hold off Ilya Borodin who charged to a 4:14.64 finish, overtaking Matteazzi. Borodin was just a touch slower than Alberto Razzetti‘s 4:14.57, giving him a second-place rank so far, while Matteazzi finished with a 4:14.70 for third overall thus far. Borodin’s swim was a few seconds over his 4:11.17 world junior record which he set just last month.

In the final heat of the men’s 400 IM prelims, 2018 champion in the event David Verraszto set himself up nicely to try for a repeat victory as he posted a 4:13.39 to take over the top seed from Razzetti. 3 years ago in Glasgow, Verraszto won the event with a 4:10.65. Teammate Peter Bernek followed in the heat with a 4:13.83 which gives him second seed heading into the final.

Helena Rosendahl Bach took heat 3 by storm, bringing the field down to a 4:11.79 to overtake the lead so far. That swim for Bach was an improvement upon her entry time of 4:13.49. Aimee Willmott followed for Great Britain, swimming a4:12.76 to take over second place while Lotte Goris of Germany hit a 4:14.06.

Reigning European champion Simona Quadarella looked to earn top seed heading into the final of the event but Russia’s Anna Egorova managed to pull off the heat win, swimming a 4:08.87 to Quadarella’s 4:09.04. Both of them were a little slower than their entry times of 4:04.10 for Egorova and 4:05.38 for Quadarella. At the last championships, Quadarella took gold in the women’s 400 free with a 4:03.35.

Should Quadarella make it to the podium in the event, it will be her 3rd individual medal of the meet, having already won gold in both the 800 and 1500 freestyles. Egorova meanwhile has already won 1 bronze medal by finishing 3rd in the 800 free.

In the final heat of the prelims, no one was fast enough to overtake Egorova’s leading time of 4:08.87. Boglarka Kapas lead the way with a 4:09.02 and fellow Hungarian Ajna Kesely was second in a 4:09.14. Those 2 swimmers were entered with a 4:05.36 and 4:01.31, giving them the potential to improve in tonight’s final when they go up against Quadarella and Egorova.

After having been reported to be out of the championships due to a positive COVID-19 diagnosis back in Turkey, Merve Tuncel made her first appearance at the meet here, hitting a 4:09.37 for 3rd place in the heat. Julia Hassler of Liechtenstein was 4th with a 4:10.74, just off her own national record in the event of 4:10.40 from 2019.

Great Britain swam the fastest 4×100 medley relay on the men’s side of the prelims, hitting a 3:32.48 to nearly get within 2 seconds of the country’s meet record from 2018 of 3:30.44. Joe Litchfield opened things up with a 54.09 backstroke split while James Wilby notched a 58.90 in the breaststroke. Duncan Scott was the team’s butterflier, hitting a 51.43 and Tom Dean closed it out with a 48.06 in the freestyle.

Joining the top 4 teams in the final will be Ireland, Russia, Belarus, and Germany. Switzerland also raced the prelims of the 4×100 relay but got disqualified from the race.

3 teams got under 4 minutes during women’s 4×100 medley heats with the Netherlands’ time of 3:58.67 leading the way. Kira Toussaint opened things up for them with a 59.51 back split, followed by Tes Schouten‘s 1:07.84 breaststroke split and Maaike de Waard‘s 58.25 butterfly. Femke Heemskerk threw down a 53.07 anchor leg to bring it home.

Russia was right behind the Netherlands, swimming a 3:58.78 which will get them into the final as second seeds. The Russians currently hold the European record in the event which sits at a 3:53.38 from back in 2017. Russia is also the European Championships record holder from their gold medal-winning time of 3:54.22 in 2018.

Sweden also managed to dip under 4 minutes during the heats, posting a time of 3:59.36 for third place. Italy was 4th place overall, followed by Great Britain, Finland, Belarus, and Denmark who will all advance to the final. Both Greece’s and Poland’s relay squads got disqualified from the event.

Poland’s Korzeniowski with a solid fly split of 51.54, not bad for a 36 year old

Hmm so I assume Femke will swim in the final? Not sure why they would swap out Kromo with her since Femke swam three 51 splits + is the champ in the 100 free.

Kromo will probably swim the fly leg with femke on free

No, Maaike de Waard most of the times swims it, Kromo is better on the short (50m) distance, Maaike on the 100 😉 The Netherlands will have the exact same four as this morning!

Based on today italy france ireland and poland got The men medley spots? South korea out?

Ireland are really going for it in the relays, hoping to qualify for the Olympics.
The women’s relays aren’t strong enough but the men may qualify in the 4×200 free and 4×100 medley. Very impressive

Toussaint’s legs must be fried by now. Yikes, leading off the prelims relay. What’s this, like her 50th 100 back this meet?

Interesting to see whether Italy will go with Castiglioni, the silver medalist in the 100, Pilato with the hot hand and WR last night, or will they not change their breaststroker and go with Carraro because she’s the only one not swimming the 50 and comes in fresh?

If France can get a breaststroker, they’re going to have a really nice medley relay in 2024.

Theo Bussiere was 59 mid before his injury last year, Tokyo is a bit too soon but I think they will perform well next year with Brouard, Metella, and Grousset (already going 47.)