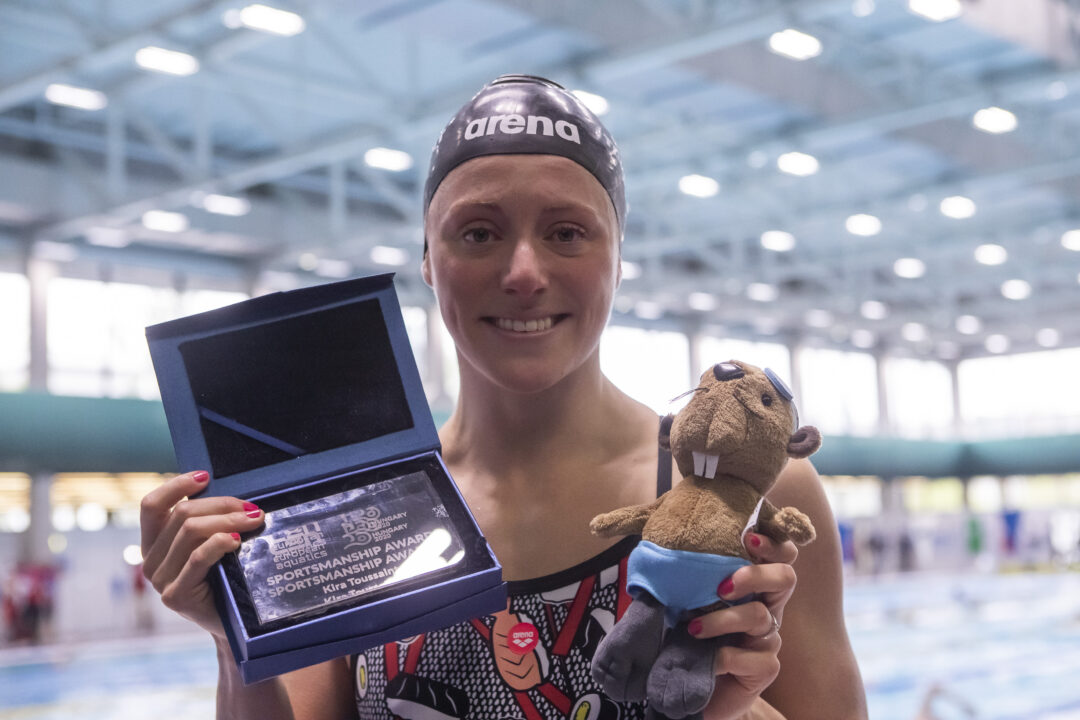 The plaque "commemorated this act of sportsmanship as all team leaders accepted the decision to repeat the final, though only a couple of lanes was affected." Current photo via LEN

One of the most unusual visual presentations at the European Aquatics Championships was a giant banner thanking the efforts of the frontline workers (doctors, nurses, teachers). At a closing press conference it was also revealed that 4 out of 18.000 PCR tests brought positive results at the championships. Here the organisers also announced that they had handed over a commemorative plaque for Netherlands’ Kira Toussaint to compensate her for the silver medal she lost during the re-swum final of the 100m back.

Besides several novelties presented at the recently closed European Aquatics Championships, the local organisers came up with a much-applauded idea: they devoted the most valuable advertising space to a giant banner on which they paid thanks for the frontline workers, first of all the medical personnel, also the policemen and the teachers for their outstanding job during the long months of the global pandemic. The main title was in English and in Hungarian but below the thanks message was also featured in a dozen of other languages.

“We do think that in the past 14-15 months the faith of the human race mostly depended on the efforts of the medical personnel in the hospitals, the policemen on the street and the future of our children was shaped by the teachers” LOC President Sandor Wladar said at a closing press conference in Budapest. “As the famous quote goes, ‘Never was so much owed by so many to so few’ – it’s from wartime but sometimes we thought we were in war against an unknown enemy and the doctors, nurses, scientists were the ones who put up the hardest fight on the battlefield. We agreed with LEN to thank their efforts and that message deserved the most visible space around the pool.”

There were medical personnel in the frontline during the championships too, a team of 350 guarded the ‘bubble’, ran the testing programme and a constant surveillance if everyone adheres to the regulations, mostly to wear the masks properly and keep social distancing. It was the largest bubble the sporting world has seen so far during the pandemic as almost 4,000 people were ‘inside’. And it worked: 18,000 tests were carried out during the two weeks but there were only four positive cases (two officials in the first week, two athletes in the second), a 0,00022% positivity rate, something any organiser and international federation would gladly accept.

“We were afraid beforehand, I have to admit that” Sandor Wladar, himself former Olympic champion swimmer, said. “We welcomed representatives from 51 countries, all with different infection rates, different vaccination programmes… But we also built on the discipline of the participants. This is aquatics, here you can reach the international level only if you have the utmost discipline and dedication. In a situation like this, everyone understood why we had to apply strict protocols. I know some were perhaps too strict, like requiring mask-wearing right after the races when the swimmers usually grasp for air. Or on the podium, where pictures for eternity were shot on the medallists – still, we couldn’t risk any compromise, and this brought its result at the end.”

The organisers also tried to create a special atmosphere and surprised the respective winners by connecting them with their families at home via prerecorded videos, screened on the giant video-walls behind the starting blocks. And there was one special case, when someone was surprised after an eventual loss.

It happened after the women’s 100m back final, which had to be re-swum due to the malfunction of the starting system. Netherlands Kira Toussaint finished runner-up originally, but she came only fourth in the repeated final while the gold and bronze medal landed in the same necks respectively. Losing a silver medal in that unfortunate way should have been a rather heart-breaking experience and the organising committee decided to offer some consolation for the outstanding Dutch backstroker.

Next day she was presented a plaque, which commemorated this act of sportsmanship as all team leaders accepted the decision to repeat the final, though only a couple of lanes was affected. “Kira was surprised and moved and I think we managed to make her happy at the end” David Szanto, CEO of the organising committee, also a former swimmer, said.

A plaque?? Really?? I’m assuming it says “Sorry we screwed up so we’re giving you a vacuous consolation prize to make ourselves feel better”?

I don’t know who is responsible for this fault LEN, official timekeeper company, organisers, staff etc., but something had been needed after it. Perheps this wasn’t the best but it was much more than nothing.

The idea to connect winners with their families on the video screen was genius. It not only was great for the athletes, but it allows the viewer an opportunity to see something other than their stoic, competitive sides, which helps to humanize them and develop an emotional connection. I hope NBC took notes, because that would be a huge human interest win for an Olympics without spectators.

Ridiculous. The medals should have been given to the top three times between the two swims

I know it’s not a silver medal. But she gets a plaque that recognizes what happened. Hope it consoles her.

Good for her for that display of sportsmanship. Sad that such a high level race gets messed up like that tho. That’s age group swim meet stuff.

You should’ve seen the World Military Games in 2019. Men’s 4×200 relay. There was no drop rope to indicate to swimmers there had been a false start. Rumor has it, they didn’t have the rope because it wasn’t “aesthetically pleasing for home viewing”. Loud audience as starter sent the swimmers, then false start. No other way to stop the swimmers than officials waving at them on the sides. Some people swam an entire 200 only to have it not count. Then everyone sat in the ready room for 2 hours, got completely cold, and went again. This was also the last event of the night when it was originally scheduled so it went very late.

Don’t even get me… Read more »

Google it. Maybe not the highest level swimming competition but apparently the 2nd largest sporting event in the world behind the Olympics.

yeah and looking at the swimmers who participated in 2019 some real big names like Chupkov, Grinev, Wang Shun and Zhang Yufei pop up.