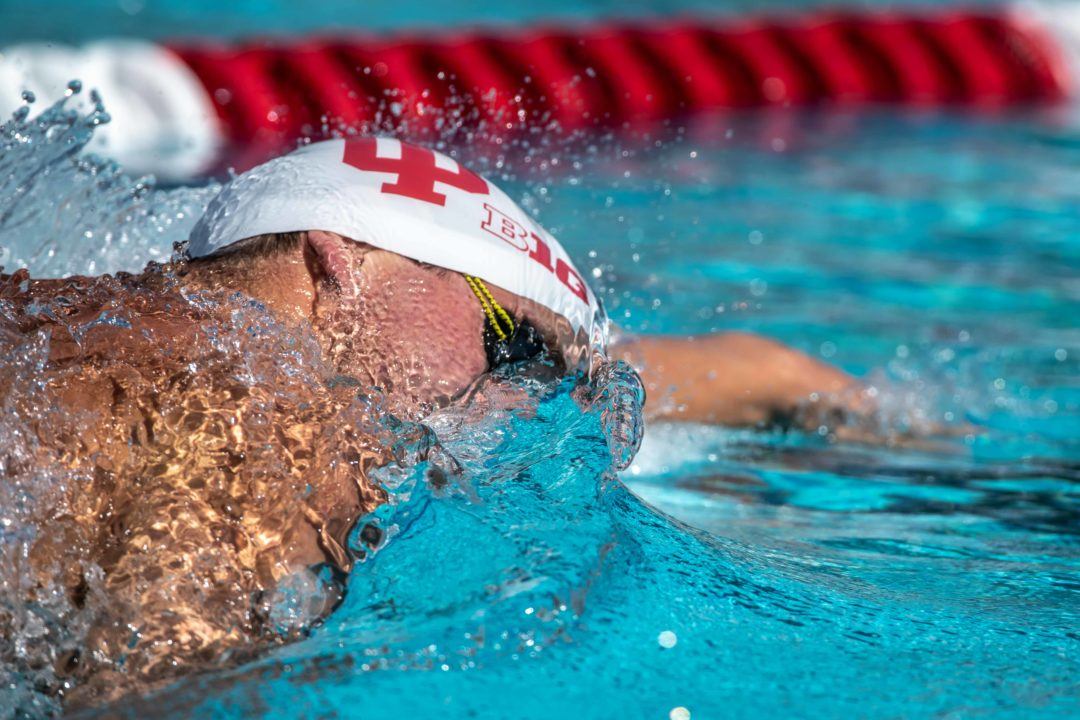 Zach Apple is a huge presence for the Hoosiers, who have a slight edge in what will be a great battle with Michigan for the 2019 B1G crown. Archive photo via Mike Lewis/Ola Vista Photography

After Saturday’s prelims session, there’s only 1 spot in the Big Ten team standings that is in serious doubt. (Above: Indiana’s Vini Lanza, the top seed in the 200 fly)

Things were very tight last year between conference powerhouses and rivals, Michigan and Indiana. It was the Hoosiers who stuck it out to the end, amassing 1,658 points, just 40.5 more than the Wolverines.

Indiana isn’t messing around this year, either. Ian Finnerty is the best 100 breaststroker in the conference, and the defending 100 and 200 breast NCAA champion, while Gabriel Fantoni and Mohamed Samy each have the fastest B1G time in at least one event, as Fantoni has put down the fastest 100 back this season and Samy the quickest 200 free and 200 IM. That brings us to Vini Lanza, another key player for the Hoosiers, who leads the conference in the 100 fly. The final piece (besides their incredible diving group) is Auburn transfer Zach Apple, one of the best sprint freestylers in the country right now, who nicely fills in for the now-graduated Blake Pieroni.

Michigan, though, is quite formidable. Indiana may have a deeper freestyle group (though not by a lot), but Michigan has some impressive stats this season in the conference, including being ranked 1-2-3-4 in the 400 IM, 1-2-3 in the 200 breast, and 1-2-3 in the 500 free. Felix Auboeck and Ricardo Vargas lead their distance group along with freshman Patrick Callan, while the IM/breast group, with Tommy Cope, Charlie Swanson, Jacob Montague, and freshman Will Chan at its core, is monstrous. Gus Borges heads the sprint group, which is a bit thinner than IU’s, while backstroke has been a weakness for the Wolverines.

Ohio State isn’t quite at the point they were a couple years ago, when they tied with Michigan for 2nd in the team race, but they’re a very deep team that looks pretty locked into third right now. Butterfliers Michael Salazar and Noah Lense are well-ranked this year, while sprinter Andrew Loy is joined by freshman Ruslan Gaziev, who has been strong in his first-ever yards season.

Purdue, Minnesota, Iowa, and Wisconsin are bunched up in the middle of the conference, with Purdue’s divers, Wisconsin’s backstrokers, Iowa’s sprinters, and Minnesota breaststroker Max McHugh and sprinter Bowe Becker the difference makers for each team.

Indiana – James Connor (senior diver), Ian Finnerty (senior breaststroker), Zach Apple (senior sprinter), Gabriel Fantoni (sophomore backstroker), Vinicius Lanza (senior butterflier/IMer), Mohamed Samy (senior backstroker/freestyler) — Indiana is likely to win the 100s (and possibly 200s) of every single stroke with how diverse their roster is. Connor is the top returning diver in the 1-meter, and there are several freshmen not mentioned who have big potential come B1Gs and beyond.

Iowa – Kenneth Mende (junior backstroker), Joe Myhre (junior sprinter), Will Scott (junior sprinter) — Mende is ranked in the top 10 in the 200 back, while Myhre and Scott have both been under 20 seconds in the 50 free this season.

Michigan – Jacob Montague (junior breaststroker), Michael Smachlo (junior flyer), Tommy Cope (junior breaststroker/IMer), Gus Borges (sophomore sprinter), Felix Auboeck (junior freestyler), Charlie Swanson (junior IMer)  — This really is one of the deepest Michigan teams we’ve seen in a long time, and none of their top guns are graduating after this season. Sophomore Vargas, as well as freshmen Callan and Chan, can be expected to explode at B1Gs, too.

Michigan State – Payton Woods (junior sprinter) — Woods cracked the 20-second barrier in the 50 free last year, scoring in the B final, and leads the Spartans’ relays.

Minnesota – Matt Thomas (junior butterflier), Bowen Becker (senior sprinter), Max McHugh (freshman breaststroker) — Becker is the B1G Champs meet record holder in the 50 free. Meanwhile, swap one McHugh out for another. Max McHugh, younger brother of Minnesota great Conner McHugh, has been lights out this year, especially in the 50 breast, where he’s unofficially gone the fastest 200 medley split ever.

Northwestern – Manuel Bacarizo (freshman backstroker), DJ Hwang (freshman distance), Ryan Gridley (freshman backstroker) — The Wildcats already look stronger with their freshman class and new coaching staff hoping to turn things around. Ryan Gridley came in with 48/1:46 bests from high school in backstroke, and he’s already been 47.2/1:43.8, ranking him 5th and 7th in the B1G in the 100 and 200 backstroke, respectively. Hwang is one of the strongest milers in the conference with top eight potential, and mid-season Spanish addition Bacarizo has already been 1:45 in the 200 back in a dual meet.

Penn State – Michael Daly (freshman IMer), Nathan Schiffmann (sophomore distance freestyler) — Daly ranks 6th in the conference in the 400 IM right now, an impressive feat for the freshman, while Schiffman is a solid distance specialist for the Nittany Lions.

Purdue – Brandon Loschiavo (junior diver), Kristian Komlenic (junior backstroker) Trent Pellini (sophomore breaststroker) —Komlenic is tied for the #2 spot in the conference in the 100 back right now, and Loschiavo, the defending B1G platform champ, is a leader of the Boilermakers’ very impressive diving group.

Wisconsin – Justin Temprano (junior backstroker), MJ Mao (sophomore everything), Cam Tysoe (junior backstroker) — Mao ranks in the B1G top 10 in the 100 fly and both breaststrokes. Tysoe leads the conference in the 200 back and is the main weapon in a strong Badger backstroke group.

Zach Apple, Indiana senior and new to the conference after transferring from Auburn, may be Becker’s biggest threat. Apple was 19.47 mid-season, a bit behind the 19.23 he went at the 2017 Georgia Invite. Last season, Apple was 19.08 at SECs and then 18.97 at NCAAs to place 5th, though he was as fast as 18.82 leading off Auburn relays.

IU’s Bruno Blaskovic has been 19.39 this year, and Michigan’s Gus Borges leads the conference with his 19.11 from the Georgia Invite. If someone’s going to crash the Becker-Apple party, it’s most likely to be Borges, who went lifetime bests last semester at the Georgia Invite and looks to be on an improvement curve.

One of the most exciting match-ups in the country is going to be the conference battle between Indiana senior Ian Finnerty and Minnesota freshman Max McHugh. Finnerty is the American record holder in the 100 breast and reigning 100 and 200 breast NCAA Champion, but McHugh has been making headlines, first after breaking the 100 breaststroke National HS record last February, and then last semester when he went the unofficial fastest 200 medley relay breaststroke split, ever.

It’s certainly Finnerty’s race to lose, but McHugh has been impressive, having been 51.73 at mid-season. He went head-to-head with USC star Carsten Vissering, losing but still putting up a strong 52.62 behind the Trojan (52.29). Finnerty was 51.22 mid-season, a half-second ahead of McHugh, and there’s a good chance they’ll both at least be sub-51 at B1Gs.

This is going to be a monumental battle between Michigan and Indiana. The Wolverines have the meet record, a 6:09.85 from 2014 that included a 1:30.60 split from Michael Wynalda and that also broke the NCAA record. Last year, Indiana took the race in 6:11.50, not very close to Michigan’s record, while the Wolverines were well back at 6:16.51 for 2nd.

Last year, Finnerty, Mohamed Samy, and Vini Lanza split 1:33’s for IU, while Blake Pieroni was 1:31.5 on the 2nd leg. Pieroni is graduated, but Apple should take over for him. His best is a 1:31.18 from 2018, compared to Pieroni’s 1:29.63, though not everyone is going to be fully tapered and firing on all cylinders at B1Gs so you can throw those comparisons out the door. In 2018, Felix Auboeck was 1:31.51 to match Pieroni on the 2nd leg, but Michigan had 1:34 leading off and two 1:35’s finishing it off, including using miler and now-graduated PJ Ransford on the anchor.

This year, the IU team should look almost the same, swapping in Apple for Pieroni. For Michigan, Auboeck may be the only returner. At mid-season, they put on Borges, Mokhtar Al-Yamani, and freshman Patrick Callan. All four swimmers split 1:34, though we know for a fact that Auboeck can be a good three seconds faster, while Callan was 1:33.89 in the individual 200 at mid-season and Michigan could pick out someone else for one of these spots.

Just as it was last year, Michigan and Indiana will be very close. Things may come down to diving, where IU has a huge advantage thanks to their big diving group. They’ll likely have James Connor and Andrew Capobianco in A-finals on both springboards, and Capobianco scoring on the platform, while Mory Gould is another diver with A-final potential in at least the 1-meter.

With this noted, Indiana is favored to win this (as the Swimulator rankings below do not include diving points). OSU is a safe bet for third, and Purdue’s diving should keep them buoyed, though Wisconsin and Minnesota will be hot on the Boilers’ heels. Northwestern, under their new staff and with a quietly impressive freshman class, may have enough momentum to push themselves out of 9th and gun for Penn State.

Bruh, you guys are all going to look silly when OSU runs train this weekend and defeats IU and Michigan

About 24 hours before beggining and no start lists..

IU WILL win. Coach Looze Olymic Coach, innovator, great technician, his team will be ready to surprise the SW. Michigan will belly up like they usually do.

Not like Bottom hasn’t been an Oly coach as well… oh wait… he’s also won an NCAA team championship, something Ray has yet to do. Otherwise, super insightful comment.

If the Hawks come within 100pts of their projection, I’ll eat my cap.
Northwestern finally getting some pieces will be good for the conference. Miss the Grevers days.
1. IU
2. big Blue
3. OSU
4. Purdue divers
5. MN
6. UW
7-9… think any order is possible for NW, PSU, IA
10. MSU. Hope they get more individual swims in finals than their women’s team.

Always negativity from you.

Who won last year? Who finished higher at NCAAs? Who was Olympic Coach in 2017? Hey you Meeechijan people living in da past. This is now and Indianaians gonna crush the little blue Boyz.

Will you post a video of you eating your cap?

I love the Purdue divers in 4th. So true.

No Psych Sheets yet?

Definitely spicy. Extra spicy if he is a late addition to the conference team, but that’s a question in and of itself, and in the meantime, who knows how well he can hold onto his taper. Would be a really nice two-event (at least) scoring boost for the Wolverines, though.

NM Coach – it does not. We haven’t found a good way to get diving results into a database (even if we all acknowledge and ignore the variability in scoring for judged sports at different competition). At last year’s Big Tens, Indiana had maybe a 175 point advantage on the springboards, and a much smaller advantage on platform, coming to about 200 points total.