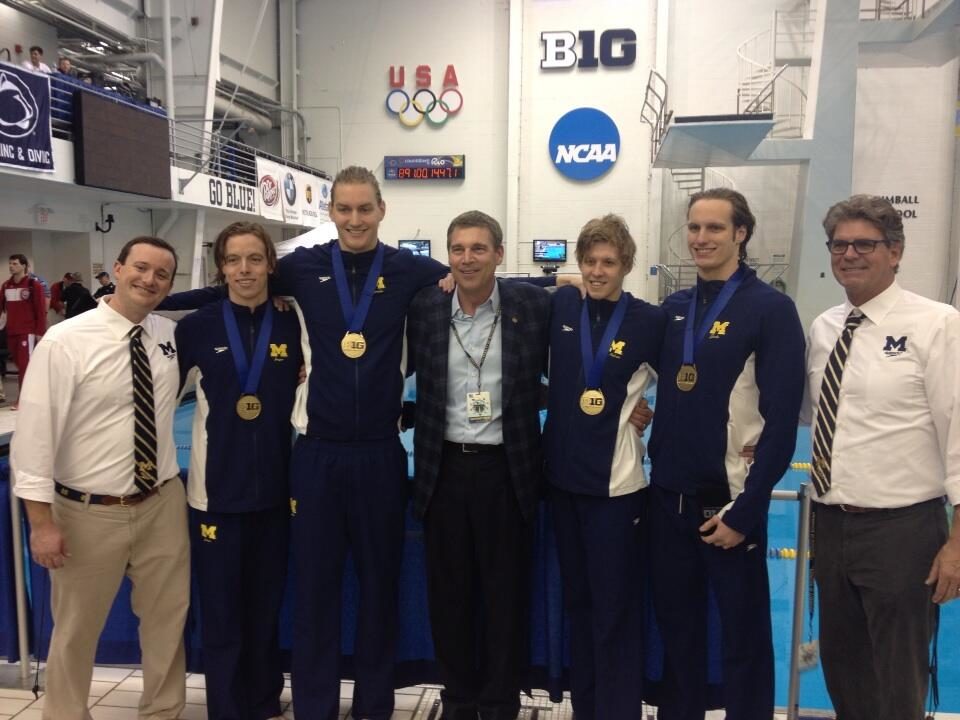 Michigan's Michael Wynalda had one of the all-time great yards relay splits to begin the 2014 Big Ten Championships, en route to the fastest ever 800 yard free relay. Current photo via University of Michigan

The Michigan men swooped in right behind an impressive NC State relay with a second “did you see that” moment of the night as the second round of NCAA Division I major conference championship meets kicked off on Wednesday.

The Wolverines swam a 6:09.85 in the 800 free relay to break the Big Ten, NCAA, and U.S. Open Records in the event, with a team of Anders Nielsen, Michael Wynalda, Justin Glanda, and Connor Jaeger.

The splits (take note of Wynalda’s second leg – that’s a real split, and the exchange of .30 wasn’t even perfect):

While Michigan swam the fastest 800 free relay ever, their lead-off leg Nielsen is Danish, so Texas’ relay will still stand as the American Record.

Note that Wynalda’s swim, as far as we can tell, was the fastest “through the water” (taking out reaction time) in history in the distance. The American Record on a flat-start is 1:31.31, and if Wynalda is as fast through the water on his individual race as he was in this relay, that record could be toast as well.

That’s about as blue as it gets. Go blue. Blue.

😆
I’m not the swimswam video specialist.
No trace of the race on youtube. Perhaps in the next hours.
I have a little day 1 recap about Michigan.
http://www.mgoblue.com/allaccess/?media=437874

Michael Wynalda is a beast. He looks giant on the picture.

At least. It will be hard to repeat at the end of the middle day in a few weeks, but what a swim! 129 is in store for the near future, especially with a top team like Michigan being so sharp at conference, where the relay is first day.

This relay will go even faster at NCAA’s and watch out for Florida!

It’s possible that UF could swap out Main and Cieslak for D’Arrigo and Werner depending on how they are swimming. Another great 800FR battle looms!

First off, what a relay!! Congrats to UM. I really hope that there is a great 800 race at NCAAs. Florida can move some people around and get some time that way, but 4 seconds is quite a bit. I like the fact that Florida now sees what they are going to have to do to win again.

Hey David – under the new system, that’s not quite how B cut invites work. In short, B cut invites are only relevant for teams that already have A cuts., so there’s never any “the top 2 A-cut relays might go”.

Is he the big guy in the photo? Just for scale, are the other swimmers 6’+?