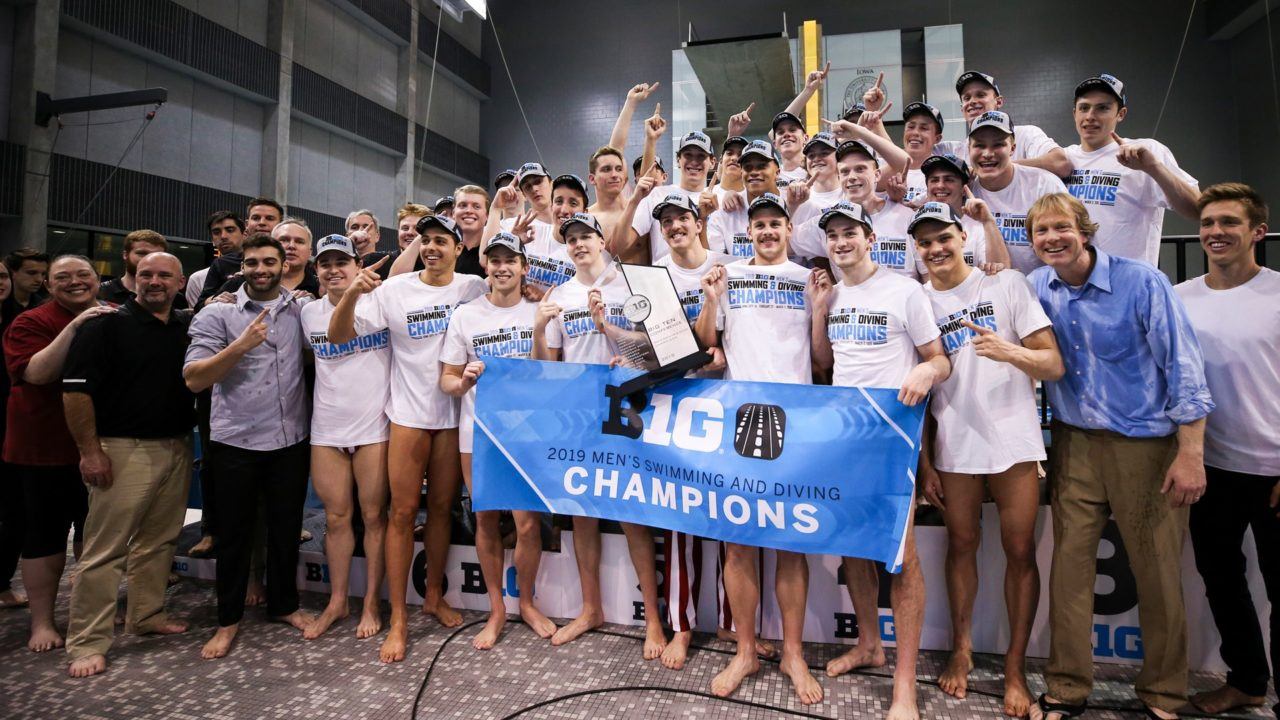 The Indiana men defended their conference title. Here's how it happened in numbers. Current photo via Indiana Athletics

After Saturday’s prelims session, there’s only 1 spot in the Big Ten team standings that is in serious doubt. (Above: Indiana’s Vini Lanza, the top seed in the 200 fly)

IU continues to look strong as they head into the final day of competition. Along with them, Minnesota’s Bowen Becker and Michigan’s Charlie Swanson look to contend for double wins against the Hoosiers.

There is a lot of data below. A quick table of contents: Final Scores, Individual Scores by Class, Score Progression, Points in Each Event for Each Team, Number of Times Each Team Got Each Place (Individual Events), and Individual Swimmer Performance Breakdown

Hey swimswam, you keep on putting “James” Brinegar instead of Michael. I’ve seen it in several articles now.

I believe that James is his first name and Michael is his middle name, or vice-versa. He was listed in the Big Ten results as “James,” so when Andrew scrapes the data, the computer doesn’t know that he usually goes by “Michael.”

Oh OK. Didn’t know that. I’ve only ever seen him as Michael in results so I was confused.

I respectfully disagree on that first point. Watching the points as they came through, the B1G championship seems to have been decided at the conclusion of the first diving event.

How so?
The team scoring in the first diving event (1M):

The 2 main teams for swim were Indiana and Michigan. Diving was Indiana’s “3-pointer” vs Michigan.

Two responses to that:

1) Even without considering that Indiana chose to dedicate scholarships to diving that they could’ve used on swimmers, diving still accounted for less than half of their margin of victory
2) Michigan out-sccored Indiana on platform.

Misho, our hero, got all the points for the IU Junior class

Next year IU will only win by 200 points. All of the number crunching does not account for the GREAT COACHING at IU versus coaching at Meechiguun which obviously aint that good.

Isn’t this the first year that Indiana actually beats Michigan in the swimming portion and barely doing so in the Big 10? (In the past 10 years at least) So by making fun of Michigan, you’re also making fun of Indiana cause when they do finally beat them, they are still on about the same level.

Given that diving is also involved, Indiana recruits way way better on the diving side because of an accomplished diving coach.

SwaM – please don’t call other posters annoying. That crosses the line into “personal attacks.” Thanks!