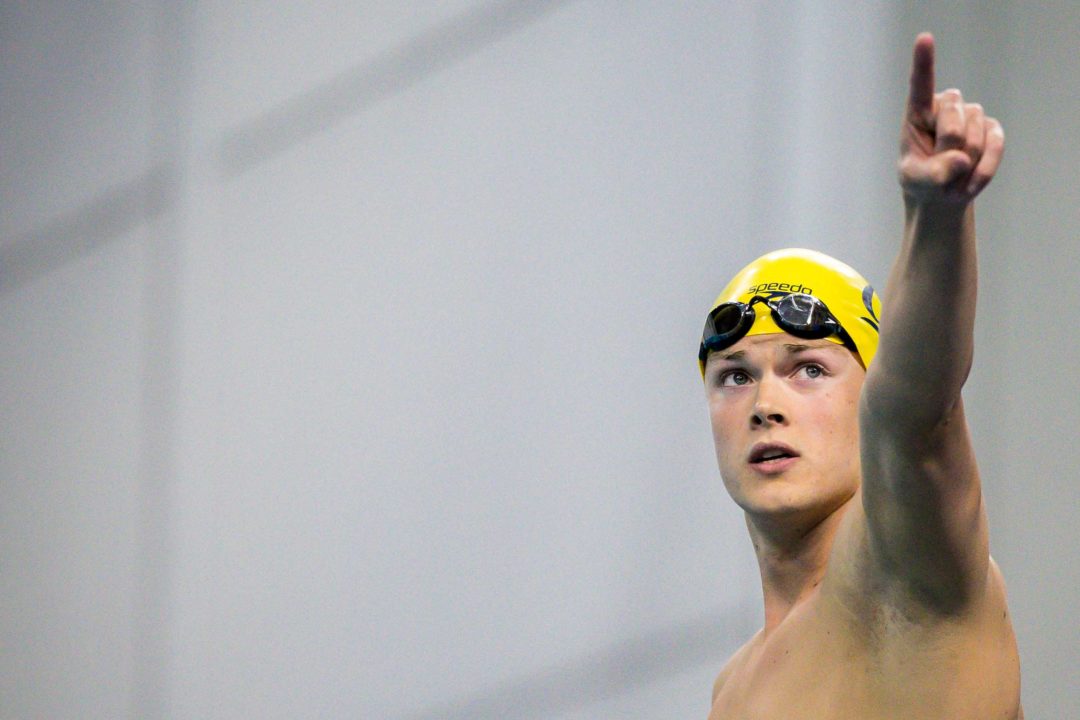 NOTE: This article has been updated from original publication following Carr’s re-swim

In what has already been a meet of extraordinary events, a failure to remove the backstroke wedge mid-race gave California sophomore Daniel Carr a re-swim opportunity in the 100 backstroke that carries serious consequences in the team race.

In his morning heat of the 100 backstroke, the wedge was not removed from Carr’s lane following the start, resulting in Carr flipping into the wedge at the halfway mark, clearly affecting his second turn.  He finished the race in 45.45, temporarily putting him just out of scoring position at 17th place.  While it’s impossible to determine the exact impact of the wedge, he appeared to lose some ground coming off the second wall (see embedded video below).  In addition, he was 45.09 leading off last night’s 400 medley relay, and his opening 50 of this morning’s race (before hitting the wedge) was 21.74, right in line with last night’s effort.

Carr was awarded a re-swim following the error, and he capitalized in a big way for the Bears.  Swimming alone out of lane 1–the same lane as his first swim–Carr clocked a lifetime best 44.86, good for fourth overall.  Notably, he flipped at 21.75, meaning Carr made up over a half second from his earlier swim during that second 50.

Beyond giving Cal an addition 11-20 points (assuming no disqualifications), the implications on the team race are magnified when also considering the Texas athletes in the events.  Prior to the re-swim 16th place belonged to Austin Katz of Texas, who will now be relegated to first alternate, and Ryan Harty was 6th place.  Katz led off the Texas 400 medley in 44.94 yesterday morning, so he was clearly capable of winning the consolation heat tonight.  Furthermore, that bumps Harty from lane 7 to a less-coveted outside lane in finals.

Outside of the team title race, the re-swim also knocked Alabama’s Zane Waddell out of the championship final.

Videos of both swims (including a very animated Dave Durden in each) are below:

That should be the Cal recruiting video – would have loved to be part of a team like that. Durden is definitely a special coach. Great swim.

Cal is owning Texas at their own pool. Like a burglar breaking in, duct taping you into a chair, then making you watch them ransack your own home. Cal was the best swimming program in 2018 too so not exactly a novel experience for hook’em horns. #PainInAustin﻿

If this happend on the international stage, I think that the officials would have allowed 9 people in the A final(in a 10 lane pool) and everyone would have been happy. If I am not wrong, 9 people already swam in a Final at one of the Fina world cup stops.

The problem is that Texas pool has only 8 lanes and therefore, it is impossible to find a solution that would satisfy everyone.

People saying that Waddell and Katz should get to improve their times too are missing that the goal should be that every swimmer gets one (1) fair chance to swim a race. Waddell and Katz had theirs. Sucks to get bumped out of the finals for sure. But, thems the breaks.

I would agree with you to an extent in that every swimmer should get 1 fair shot. With that being said, as soon as you allow someone a reswim, with the goal being to give them their 1 fair swim, you are unintentionally being unfair to the 8th and 16th place swimmers by giving the reswim swimmer an advantage. An advantage that I really think is beyond argument, it may be small but it is undoubtedly there. This really only effects the 8th and 16th swimmers as they are the only ones who stand to lose anything from the reswim swimmer’s advatage. Thus it seems to me that the most logical, and consequently fairest, solution would be a three way… Read more »

Carr does get some advantage from knowing how fast he needs to go, for sure. I don’t know. I think in your situation Katz should never be able to jump to the A final, since he placed 16th in prelims. (edit: and Waddell should never fall out of the B final).

Also what if all swam off, they all go faster than in the morning and Carr goes like a 45.2 but loses to both Katz and Waddell? He still has an argument to be in the B final because he never had a fair swim in the first place, and he went faster during his fair swim than others who made the B final.

Good point about Katz, that certainly complicates my idea. The solution would be to allow Carr and Waddel to win either of the final spots in this reswim, but Katz only having the ability to defend his 16th place finish. This admittedly complicates things quite a bit.
I also totally see what you mean with him not getting that original first shot that every other swimmer got, but I don’t see a way around it. In the end, these circumstances are less than ideal for all three swimmers involved, as at best they’re forced to do an extra swim, and at worst they’re arguably robbed of a spot in the finals.

why don’t they have retractable wedges?

Even with retractable wedges, this situation is still possible if they malfunction. Re-swim the affected lane(s) is correct decision. Period.

To avoid it being a time trial, take places 16 through 23 (volunteers only), reseed them into lanes (Carr still has to take lane 1) and the winner of this heat gets to bump in where his time puts him in the A or B final.

I have no personal prejudice in this as I couldn’t care less who wins the team title, but to me I do think this is somewhat unfair to the 8th and 16th place swimmers. With that being said it would be equally unfair, and perhaps even more so, to not let Carr get a reswim. My solution to this conundrum is a three way swim off where the fastest gets the A-final spot and the second fastest the B-final spot, irrespective of the times of the other locked in finalists. The important thing being that the times do not really matter from these reswims as far as placing goes. They could theoretically have the three fastest times but still only… Read more »

What’s with the down-votes? This is a pretty creative suggestion. One thing is sure, no solution is going to be 100% satisfactory to everyone.

People in here talking about the 8th and 16th place guys as victims. The real victims are Dave Durden’s ankles.

Should absolutely be a re-swim for all swimmers knocked out of A, B finals. If you don’t know what clean water means to a swimmer, you should stop commenting. Also, lane 1 with his coaches and teammates screaming the entire length not an advantage? Poor resolution without question. Really a black mark on the meet.