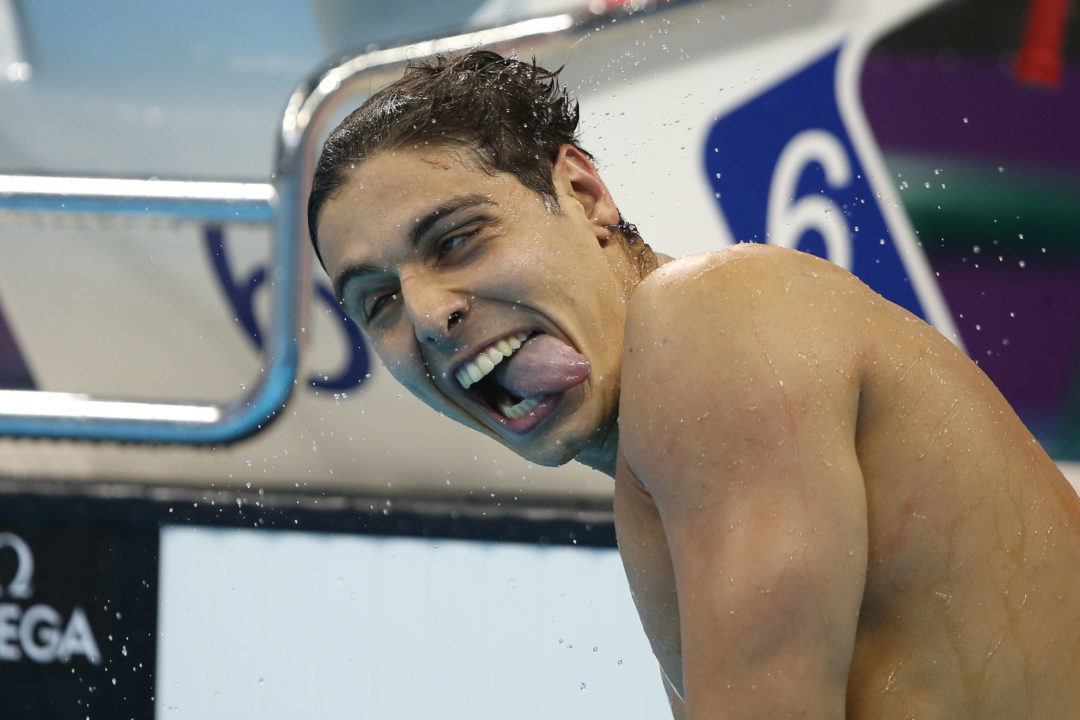 After Saturday's prelims session, there's only 1 spot in the Big Ten team standings that is in serious doubt. (Above: Indiana's Vini Lanza, the top seed in the 200 fly) Archive photo via Satiro Sodre/SS Press

The Indiana men put together an emphatic final morning session to lock-up their 3rd-straight Big Ten title and 27th overall. While technically no points were scored, Indiana have 14 swimmers seeded to finish in the A final in Saturday evening’s swimming session alone. That doesn’t include the 400 free relay, in which the Hoosiers will be favored after a dominant, meet-record performance in the 200 free relay; or diving, where Indiana always scores big.

The next-closest teams are Michigan and Ohio State, with 8 seeded each. Those two teams combined account for 30 out of the 40 A-final swims on Saturday evening (including the fastest heat of the timed-final mile).

There’s really not enough room for much, if any, movement in the top 5 teams. The only real team battle to watch on Saturday evening will be for 6th place between Penn State and Wisconsin, who enter the day separated by just 3.5 points. The two had about-equal performances in swimming (Wisconsin has an extra A-finalist, but Penn State has 3 more total scorers). While Penn State has had the superior diving performance thus far from senior Hector Garcia, platform isn’t his specialty. He’s the school record holder in the event, but was only 18th at Big Tens last year. While he’s doing a little better through 2 of 6 rounds of the platform (15th as this is going live), Wisconsin’s Kevin Pomeroy is in A-final position: 6th so far.

In other words, if Penn State hopes to hold off Wisconsin for 5th, they’ll have to do it in the lanes. Penn State was 8th at last year’s meet.

Not including platform diving or 400 free relay:

Not including platform diving or 400 free relay:

party at the paerk tonight

just what the Doctor perscribed

Wow. That Vini is something. Wouldn’t mind taking him out for a cheeseburger after he dominates that 2fly tonight

Randers- You don’t get to that level by driving cheese burgers into your fat gut! But a boy’s gotta eat

I believe it will be IU’s third straight title.

Dominant performance by the Hoosiers this morning, expect nothing less by a championship team. Looking for how many NCAA spots get locked in tonight. Also 3rd straight title, not 2nd.