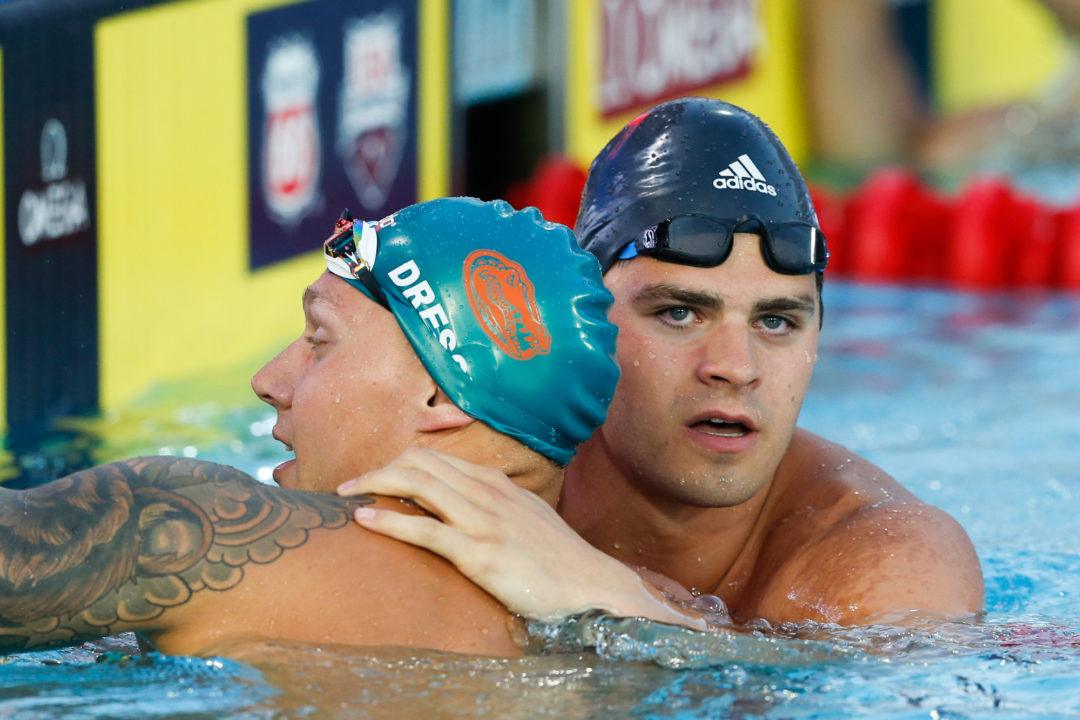 After winning 2 of the stroke 50s so far to qualify for Worlds and qualifying for Pan Pacs as he won the 100 breast, Michael Andrew will battle World champ Caeleb Dressel in the 50 free. Current photo via Tim Binning/TheSwimPictures.com

After winning 2 of the stroke 50s so far to qualify for Worlds and qualifying for Pan Pacs as he won the 100 breast, Michael Andrew will battle World champ Caeleb Dressel in the 50 free. Olympic medalists Chase Kalisz and Melanie Margalis are the favorites in the 200 IM. Simone Manuel, American Record holder, is going for the sprint sweep in the 50 as she leads the way into finals ahead of Margo Geer and Abbey Weitzeil.

This race was all Ashley Twichell as the open water and distance standout dominated the race. Twichell swam her lifetime best 16:08 earlier this season during the pro Swim Series, but blew that away tonight in 15:55.68, knocking over 10 seconds off her time. Twichell is now the 4th fastest American ever and the only other active American to go sub-15, aside from World record holder Katie Ledecky. Leah Smith, who scratched the event today, now has some competition for that 2nd mile spot if she chooses to try and earn a Worlds spot. Smith can swim the race at pan Pacs.

Penn State’s Ally McHugh, who wont the 400 IM earlier to qualify for pan Pacs, trailed through the first 400, but picked up the pace through the back half to take 2nd in 16:02.56, jut out-touching junior star Erica Sullivan (16:02.88). That was a 14 second drop for McHugh and a 3 second drop for Sullivan, who are now the 7th and 8th fastest Americans ever in this event. With the double for McHugh and a likely double in the sprints from Manuel tonight, Sullivan has a shot of making Pan Pacs with her 3rd place finish, but it isn’t set in stone.

Haley Anderson, an open water world champion, was just a few tenths outside of the all-time American top 10 in 16:04.81. Anderson and Hannah Moore, who took 5th in 16:12.24, have already qualified for Pan Pacs in the open water races and will be allowed to swim pool events. That was Anderson’s first time under 16:10. 15-year-old Mariah Denigan topped the afternoon heats, breaking 16:20 for the first time in 16:19.29. She’s now less than half a second shy of the all-time top 10 Americans in her age group. Denigan was the fastest junior in this event and landed 7th overall.

Olympic medalist Melanie Margalis looked like the favorite coming in, but Kathleen Baker ran away with it tonight. Baker, who broke the 100 back World Record last night, established a quick lead up front and then held on to win it in 2:08.32, marking her first swim under 2:10 and a best time by 3 seconds. That broke the former U.S. Open Record set by Olympic champion Katinka Hosszu in 2015. Margalis wound up 2nd in 2:09.43.

Ella Eastin, who came down with mono in the leadup to this meet, was 3rd in 2:10.84. That was only 3 tenths shy of her best from 2016, but there’s a good chance she won’t make Pan Pacs with that 3rd place finish. Eastin shattered the American Records in both short course IMs this season and was still looking for a big long course breakout. She touched 2nd in the 400 IM last summer but was ultimately disqualified for the Lochte rule, leaving her off the Worlds team. If she doesn’t make Pan Pacs here, she can’t swim at 2019 Worlds either.

Texas Evie Pfeifer has had a great meet so far. She capped it off with another best time, taking a tenth off her prelims swim for 4th in 2:11.53. She outsplit Meghan Small (2:11.65) on the free leg to out-touch her at the finish. That was Small’s first time under 2:12 since the 2015 Pan Am Games and just a few tenths shy of her lifetime best from that meet.

Chase Kalisz had his best swim of the meet tonight. When he won the Worlds title last summer, he put up his lifetime best 1:55.56 to become the 4th fastest American ever and the 7th fastest man ever worldwide. It’s clear that Kalisz is saving his best for Pan Pacs, but he was less thatn 2 tenths shy of his best to win it tonight in 1:55.73. His 2017 Worlds teammate Abrahm DeVine, the 5th fastest American ever, secured his Pan Pacs spot with a 1:57.21 for 2nd, about a half second shy of his best from last summer.

Andrew Seliskar came from behind to catch up to Gunnar Bentz, taking a second off his best as he tied Bentz for 3rd in 1:58.23. Before this season, Seliskar hadn’t gone a best since 2013. Olympian Bentz clipped his best by about a tenth tonight. Josh Prenot, who qualified for Pan Pacs by winning the 200 breast at this meet, was a close 5th in 1:58.57.

In the B final, age groupers Carson Foster and Gianluca Urlando battled for the 15-16 NAG Record as they trailed heat winner Will Licon (1:59.39) closely. Foster re-broke his NAG Record from this morning, clipping off a few tenths in 1:59.44. Urlando would’ve had his first ever sub-2:00 swim, but was disqualified for a false start. He may be swimming that races at Pan Pacs, however, as Urlando placed 3rd in the 200 fly at the beginning of the meet to potentially qualify.

Zane Grothe has only gotten better as this meet has gone on. He picked up another win tonight as he built a lead, swimming under American Record pace, through the front half. He fell slightly off in the final 200, but still became the 3rd fastest American ever in 7:44.57. That was Grothe’s first time under 7:50 and a best by 6 seconds. Earlier this season, Grothe set the American Records in the 500 and 1650 freestyles. Grothe’s time tonight was a new U.S. Open and Meet Record.

Jordan Wilimovsky tried to pull up on Grothe through the back half, but Grothe really kicked it into gear on the last 200. Wilimovsky, the mile champ, wound up 2nd in 7:47.51. He dropped 11 seconds to become the 7th fastest American ever. 2017 Worlds member Robert Finke, who took 2nd in the mile, was 3rd in 7:51.45, chasing down Logan Houck (7:54.80). Finke is now the 10th fastest American of all time and the 3rd fastest American ever in the 17-18 age group.

Though Houck was 3rd in the final, Nick Norman once again landed in the top 4 with his time from the afternoon heats in 7:54.47. Houck dropped over a second tonight, while Norman blew away his time by almost 8 seconds. 5th went to 2017 Worlds team member True Sweetser, who won the mile at 2017 nationals, in 7:56.08.

Simone Manuel completed the sprint sweep in a new U.S. Open and Meet Record of 24.10. That was Manuel’s 3rd best time ever and the 4th fastest American performance in history. Olympic teammate Abbey Weitzeil has been making her way back to the top of the sprint ranks after missing her best times last summer. She was 2nd here in 24.56, her fastest time since 2016.

After taking a post-2016 break, Indiana’s Margo Geer has been making a comeback. Geer, who put up her bests in the sprint free races this year during the Pro Swim Series, was 3rd in 24.79. That was just hundredths off her best and gives her a medal in both sprint races this week. 18-year-old Grace Ariola was 4 hundredths back, touching 4th in 24.83. Ariola was a hundredth shy of her best from last summer’s World Junior Championships. She’s the 3rd fastest 17-18 year old American ever behind only Manuel and Weitzeil.

Veteran sprinter Madison Kennedy was the only other swimmer under 25 for 5th in 24.92. Olympic sprinter Lia Neal came in behind her at 25.00 for 6th. 15-year-old Gretchen Walsh, who has made headlines with he sprint free performances this weekend, clipped her best down to a 25.03 as she placed 8th. Walsh is now the 3rd fastest American ever in the 15-16 age group. She was a finalist in both the 50 and 100 free this weekend.

Michael Andrew had done it again. World champ Caeleb Dressel popped off the start to the lead, but Andrew moved ahead towards the finish, knocking 2 tenths off his best in 21.49 to win his 3rd of the 4 stroke 50s this week. Dressel wound up 2nd in 21.67, out-touching felow Worlds sprint medalist Nathan Adrian (21.85). Andrew is now the 6th fastest American ever in the event. He was just 2 hundredths off the Meet Record tonight.

Michael Chadwick was a hundredths shy of his best for 4th in 22.00. Since he didn’t place in the top 4 in the 100 free, Chadwick won’t be making the trip to Pan Pacs this summer. Fellow 2017 Worlds team member Zach Apple was 5th, also just off his best in 22.06. Apple should be making the trip to Pan Pacs since he placed 4th in the 100 free earlier in the meet. he had the fastest 100 free time of the meet with his performance in prelims.

Can the Usurper usrpt Dressel in the 50 free? Upvote for MA. Downvote for Dressel.

Usurper gets 3rd. Dressel and Adrian will show up.

THE USURPER vs THE DOMINATOR

Usurper. Welcome to the age of USRPT.

Too many BPs already for the Usurper. Dressel is starting to perform. I think he was over-trained and under-rested. Troy screwed up again.

Rowdy said they were kinda pedestrian.

They were all breathing on the wrong side.

They didn’t put the blinders on.

Looks all wrong. Dressel will be 21.3