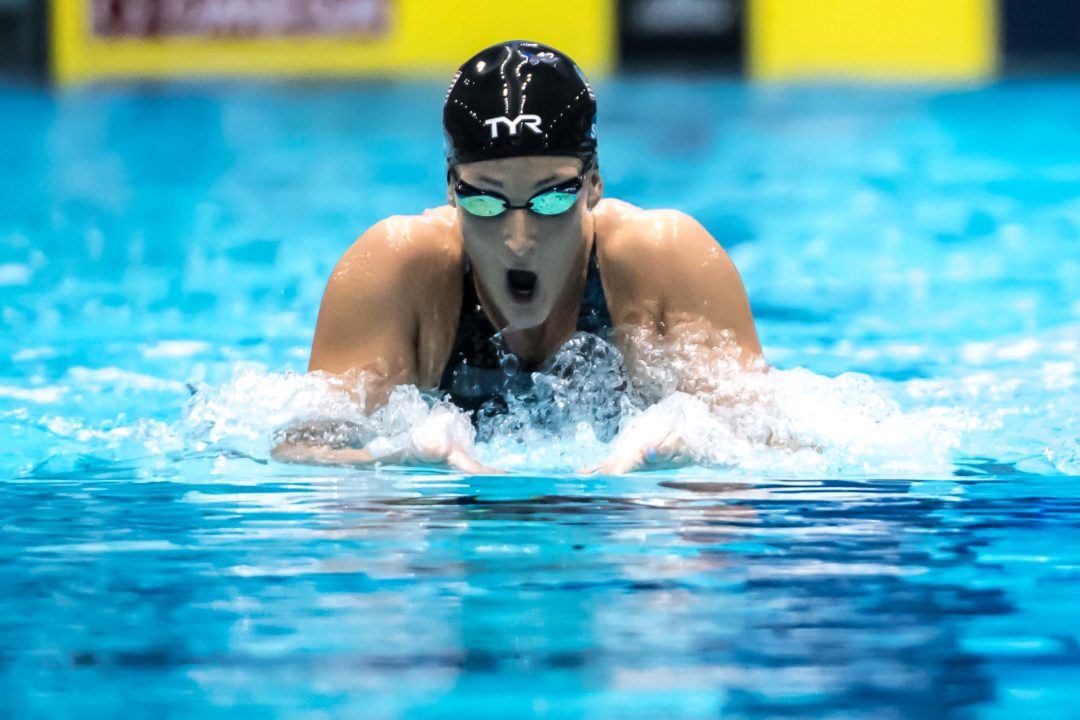 We didn't think we'd see Leah Smith in the header photo of a 400 IM preview either. Archive photo via Mike Lewis/Ola Vista Photography

In Rio, Katinka Hosszu had her most impressive performance in the 400 IM, decimating the competition en route to setting the world record by over two seconds. She touched almost five full seconds ahead of silver medalist Maya Dirado. Hosszu has only been 4:33.71 this year, the 2nd-fastest time of 2017. She has not looked as good this year as she did in-season last year– before Rio, she had already broken 4:30 and been in the 4:30-lows. Whether the rumors of her harder-than-ever training regimen are true or not, Hosszu does not need to go a 4:26.3 to win this race in Rio.

First in the world this year, and by a solid margin, is Japan’s Yui Ohashi. She exploded for a Japanese record 4:31.42 in April at the Japanese Nationals, bettering the old mark by more than three seconds. One of the new faces in this 400 IM crowd, Ohashi works with Norimasa Hirai, who helped coach Kosuke Kitajima and Kosuke Hagino into international stars.

“When I told her she could swim a 4:35, she didn’t believe me and she did it,” Hirai said in an interview with Japanese news agency Kyodo News. Hirai is referring to the 4:35 that Ohashi dropped in February. “I told her 4:31 for today and she managed that, too. So the next time I tell her she can do something, she better not doubt me — even by a single percent.” It’s anyone’s guess as to what Hirai plans for Ohashi in Budapest, but the 21-year-old breakout performer has Hosszu and the rest of the world chasing her down as the world leader this year.

Mary-Sophie Harvey is another new face to international competition in this event. One of many rising Canadian teenagers, Harvey comes in with a 4:36.48 from the Sette Colli Trophy in June. That’s actually faster than the 4:36.60 that she swam at Canadian Trials to qualify for the meet, and Harvey did say in an interview at the Mesa PSS that she had been slammed with a virus after the 400 IM at Trials that left her bed-ridden. Of course, one week after that virus, Harvey was able to get back up and beat Katie Ledecky in the 400 IM in Mesa. She’s a versatile talent, and could surprise with a big swim in Budapest. Meanwhile, her fellow Canadian Sydney Pickrem posted a 4:35.43 at Canadian Trials, and while Pickrem is better in the 200 IM, the two women will likely represent Canada in the 400 IM final in Budapest.

The 400 IM in Indianapolis nearly sent two new faces to Budapest (in this event, at least) but for the infamous DQ of Ella Eastin for the Lochte Rule. Leah Smith, with her world #3 time 4:33.86, was still safely qualified in this race, but Eastin’s DQ bumped Elizabeth Beisel up to the 2nd spot. Beisel had an elongated break after Rio, but she credited her Bluefish coach Chuck Bachelor and UF coach Gregg Troy for her “huge swimming base” that kept her in shape after that break. Smith, meanwhile, alluded that she didn’t come down to a full-blown taper for Indy because she had confidence in her races. The 400 IM time for her was a surprise for most swim fans watching, and if she really does have more to whittle down in Budapest, Smith will be a medal contender– especially because of what she can do on the last 100 meters.

Finally, two veterans will swim to keep the rising talent at bay and shoot for podium finishes. Spain’s Mireia Belmonte and GBR’s Hannah Miley are regular names in this event, and last summer in Rio, Belmonte knocked Miley out for bronze at 4:32.39 to Miley’s 4:32.54. They’ve posted similar times this year already– Miley a 4:34.12, Belmonte a 4:35.01. Miley has not medalled in this race since 2011 Worlds, while Belmonte has picked up the silver in Barcelona in 2013 and bronze in Rio last summer. Miley does have an edge, however, as Belmonte will have to contest the 400, 800 and 1500 free before the 400 IM on the last day of competition– Miley is only swimming the 400 IM. That said, Belmonte has been here plenty of times before, and she has a knack for finding her way to the podium.

Dark horse: Vien Nguyen of Vietnam. She was just three hundredths away from making the final in Rio with a 4:36.85, and since Rio, she’s posted a solid 4:37.71 which won her gold at the 2016 Asian Championships in November of 2016. That time set a new meet record.

I found the video of Ohashi’s 4:31 at Japanese Trials.
https://www.youtube.com/watch?v=8gryq62m7tk

Observations: She is built more like a ballet dancer than a prototypical swimmer. Her backstroke looks effortless and yet she split a 1:08.3. Have you ever seen an easier-looking 4:31?

Do not discount Harvey, she’s on fire this year and is hungry for a medal. Back half of the race, she will start to hunt them down.

I reallllyyy want Leah smith to medal in this race!!!

That sub 4 min in 400 free would be more than an impression. Wouldn’t be a bad kick off. However we would be sorry as that would mean a bronze to. My prediction for Boglarka is a PB of 4:01 low.

That’s a really good article on Ohashi linked there. I don’t doubt Norimasa Hirai. The man can flat out coach. She has a huge upside and will be giving Katinka fits in the future. If anyone can get her to the gold in 2020, it’s Hirai. She’s just a few years off, but I do see her improving her time in Budapest and getting the silver. Still, this is the girl you need to watch going forward. Tokyo is priming one hell of a team for 2020.

Leah Smith’s performance at US trials absolutely floored me. But I think after a long meet, it will be tough for her to podium in this event. My picks are:

1. Hosszu
2. Ohashi
3. Belmonte (with Harvey as dark horse for Bronze)

But it is factual? All minor means is of lesser importance. We wouldn’t have a podium if all medals were equal.

call them a silver and bronze…that is what they are!

That’s fair, I just don’t see the issue with the minor medals term

because winning a silver medal is not minor! not at all. cody’s reaction in rio when he won a bronze probably was the heartfelt reaction of the week….bronze to him was not minor.

The phrase doesn’t relate to the athletes achievement, but to the relative importance of the medal. Whether we like it or not, a gold is more significant, if it wasn’t we wouldn’t put such emphasis on gold medalists. We wouldn’t celebrate them more. We can accept silver & bronze have a lesser importance without devaluing them imo.

would you feel better if Gold was called a Major Medal instead? funny how calling them as they are ranked brings out such a reaction when it is in the nature of their definition and placing…

I don’t think so that Hosszu goes below 4:30 this time. She will have a pretty tough challenge on the day before, and some more throughout the whole meet. However, I am sure that she will not allow anyone to run up on her as this can be her 4th gold in her signature event.
For minor medals my guess are Smith and Belmonte.

Do you know what Hosszu is swimming at this championships? Is it still a secret?

She probably scratches the 200 free. I don’t see any reason to swim that, plus the semi is close before the 100 back final.

Is there any other swimmer who still hasn’t made up her mind what races to participate in less two weeks prior the WC. But I can tell you that if she competes at six individual finals plus performs relays duty she can kiss goodbye to gold medal at 400IM.

I really hope that she learned the lesson in Rio, not to anchor twice the 4×200 free for nothing, which costed her the fourth gold, and a silver for Kapas. I am sure that no one expect a nation of ten million to excel at relays.

Sorry for the duplication.
No, it’s always Hosszu to reveal her programme last.
She had the very same schedule in Kazan. She scratched there the 100 back after posting the only sub 59 time that would have been good for bronze in the final. She was fifth in 200 free (I would predict the same if she entered now). She didn’t make the final in 200 fly. There was no Hungarian relay there.

With this on the last day, where Hosszu has struggled in the past, I really like Belmonte Garcia for the upset. It’ll all be on backstroke: How close can Mireia keep it? Perhaps just not close enough. I think Harvey has a lot left to come – But she needs to swim a more aggressive front half. Not seen enough to place her in the medals.