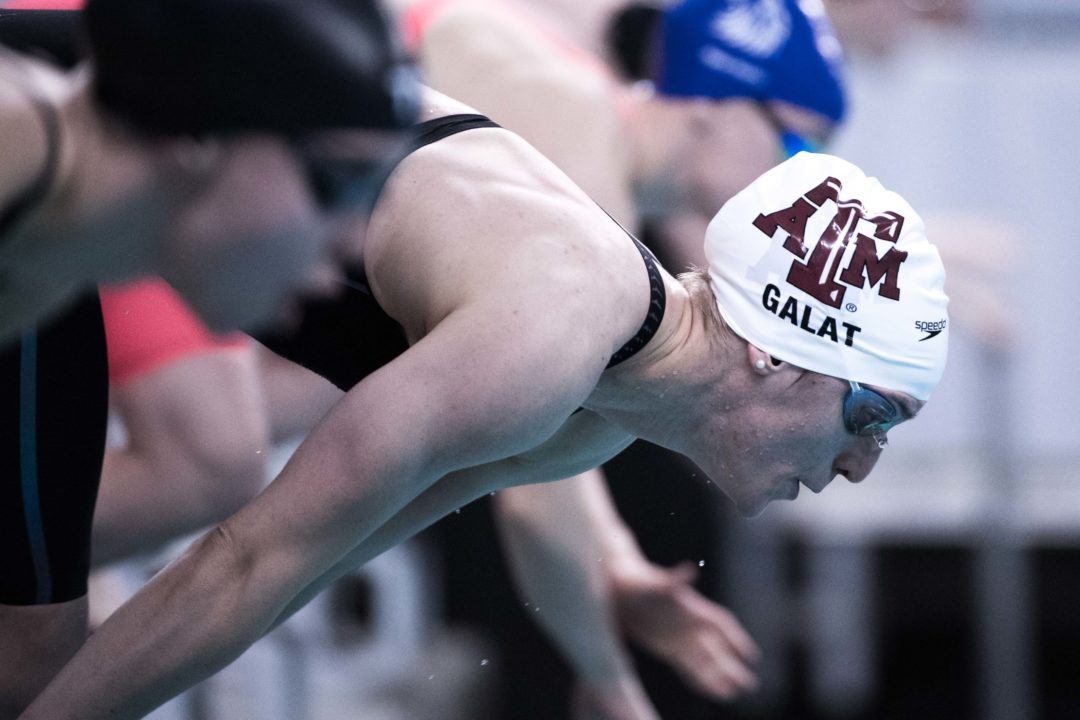 The 2016-17 NCAA postseason is slated to kick off next week with the 2017 SEC Championships at the Allan Jones Intercollegiate Aquatic Center on the University of Tennessee's campus. Archive photo via Mike Lewis/Ola Vista Photography

Dressel flipped in 18.91 en route to a 40.43 freestyle split to bring it home for Florida.

The 2016-17 NCAA postseason is slated to kick off tonight with the 2017 SEC Championships at the Allan Jones Intercollegiate Aquatic Center on the University of Tennessee’s campus. The action gets started on Tuesday, February 14th and finishes out the 5-day schedule on Saturday, February 18th.

After winning their first SEC Championship title in program history, the Texas A&M women will look to take back-to-back titles. They’ll be facing a tough Georgia squad who will be looking for redemption after having their conference streak snapped and finishing 3rd behind Texas A&M and Tennessee last season in one of the closest SEC meets we’ve seen in several years.

Arkansas – Natalie Burnett (senior fly/freestyler), Ayumi Macias (freshman freestyler), Olivia Weekley (junior butterflier), Madison Strathman (sophomore breaststroker) – Newcomer Macias has a chance to make a big impact. She comes in as a top-8 seed in the 500 free and the 3rd seed in the mile.

Tennessee – Meghan Small (freshman back/free/IMer), Kira Toussaint (senior back/freestyler), Madeline Tegner (junior freestyler), Madeline Banic (sophomore fly/freestyler), Colleen Callahan (senior breast/IMer) – All-American Toussaint is one of the favorites in the 100 back, and should bring the Vols a good amount of sprint free points. Freshman Small could be contending for a 200 IM title in her first NCAA season.

200 IM – Kentucky freshman Asia Seidt is poised to race for an SEC title as the current conference leader in the 200 IM. There to challenge, however, will be Texas A&M’s defending conference champion Lisa Bratton. This is the first of a few good matchups between those 2 swimmers over the course of the week. Also in the mix for the Aggies will be returning finalists Bethany Galat, Kristin Malone, and Sydney Pickrem. Georgia will send in Meaghan Raab, who won bronze in this event last season, and potentially Emily Cameron as well. Tennessee’s Meghan Small is another freshman to look out for, as her personal best is fast enough to have won the event last season.

100/200 Back – Both backstroke races at the SEC championships will be stacked, with Georgia’s defending champion Olivia Smoliga leading the conference so far this season in the 100 back. The 200 back will be headlined by Texas A&M’s defending SEC champion Lisa Bratton and Kentucky’s reigning NCAA champion Danielle Galyer. Look for Galyer’s freshman teammate Asia Seidt to shake things up, though, as she’s leading the conference so far in the 200 back and sits 2nd in the 100 back. The Wildcats’ loaded backstroke group will also include Bridgette Alexander and Ali Galyer. Missouri’s Hannah Stevens is another big title threat in both races after putting up blistering times of 51.1 and 1:51.7 at midseason. Several other All-Americans will make a run for a backstroke title, including Beryl Gastaldello (Texas A&M), Kylie Stewart (Georgia), Nadine Laemmler (Missouri), and Kira Toussaint (Tennessee).

The Aggies are deep in several events, and look dangerous to repeat as SEC Champions and capture their 2nd conference title in school history. They have a loaded lineup in the IMs and breaststrokes. Looking at the preliminary psych sheets, we can see that they have 6 of the top 8 seeds in the 200 breast. In addition, several of their swimmers are returning champions or medalists, including All-Americans Sydney Pickrem, Lisa Bratton, Bethany Galat, and Sarah Gibson among others.

Despite losing a few big names to graduation at the end of last season, the Bulldogs will be battling for redemption after the Aggies’ snapped their SEC title streak in 2016. Georgia has a few freshmen with championships final potential, and All-American transfer Chelsea Britt has big potential in the butterflies. The return of sprinter Chantal Van Landeghem will also give them a boost.

After finishing a close 2nd last season, Tennessee will make a push for another top 3 finish. They lost a few key players to graduation at the end of last season, including All-American sprinters Faith Johnson and Harper Bruens, who brought in a lot of points individually and played a huge role in the Volunteer relays. Transfer Katie Armitage, who could have helped reshift their medley relays, is absent from the entries. Freshman Erika Brown could go a long way in making up for the loss in the sprints and relays. Adding Meghan Small also helps make up for the gap in their IM lineup after losing SEC finalists Lauren Driscoll and Amanda Carner.

The Kentucky women have to be looking at one of their best lineups in school history, and could make a big leap from their 8th place finish last season. They’ll likely be contending for one of the top 5 spots with Missouri, Tennessee, and Auburn. The Florida Gators will look to battle back into the top 5, but it’ll likely come down to how some of their key freshmen perform.

Does anyone know if this meet will be live streamed? I didn’t see any thing on Tennessee’s page that would indicate it would.

This article here, the one that you are commenting on, has two links to the live stream.

Thanks. It wasnt on the page when I posted the comment a couple days ago. Looks like it’ll be a good meet.

They alternate each year so that will flip back to the order you have listed above for 2018.