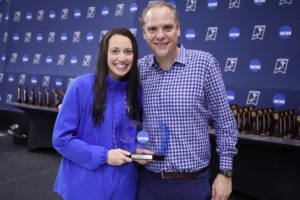 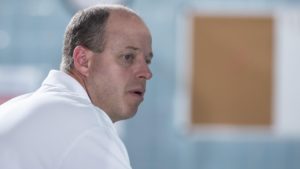 Whitney Hite, who was terminated in March as the head coach at Wisconsin, has been hired as an associate head…

Alicia Finnigan of Division I Liberty University in Lynchburg, Virginia has received the Elite 90 Award for the student-athlete with the top GPA at the 2018 Women’s NCAA DI Swimming and Diving Championships. 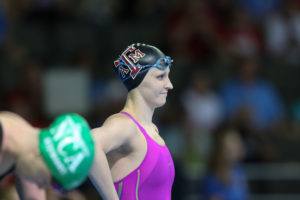 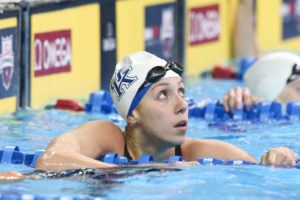 2016 NCAA champion in the 200 backstroke Danielle Galyer is one of the swimmers selected to represent their conference.

Danielle Galyer was born September 25, 1995 in Brisbane Australia and moved to the United States when she was 5 years old. Her father is from New Zealand and her mother from Canada, so Galyer has the option of four countries to represent on an international stage . At the 2016 NCAA Championships, she became University of Kentucky’s first ever national champion.

Galyer made an immediate impact to the Wildcats swimming program as a freshman, breaking the school record in 200 backstroke at the SEC Championships before competing at the NCAA meet. She swam in two events to help Kentucky to it’s highest finish in six years at the NCAA Championships, 23rd.

As a sophomore, Galyer continued to improve as a Wildcat. At the 2014 NCAA Championships, she jumped the ranks and finished just outside the medals in 200 yard backstroke, taking fourth. She was slightly slower in the finals after breaking the school record in the prelims in 1:50.86. She also gained All-America honorable mention in 100 yard backstroke finishing 11th and the 400 medley and 800 freestyle relays, finishing 15th in both.

If she hadn’t already made her mark in the University of Kentucky Wildcats record books, she certainly did as a junior. At the NCAA championships she waited until the last day to turn heads. Seeded 6th going in to the 200 backstroke, Galyer got off to a fast start in the heats and held on to take the center of the pool in the finals and didn’t disappoint. Galyer was in a head to head battle with Virginia’s Courtney Bartholomew, both turning on exactly the same time at the 150 mark. But Galyer had more left in her and pulled away in the final few meters. She became the first Wildcat to win a national title in swimming, taking gold in 1:49.71, pulling away to finish half a second faster than second place. The time moves her up to 6th on the all-time fastest list.

Her warm up for her national championship swim came in the 100 backstroke where she finished 12th in the finals and the 400 medley and 800 freestyle relays, where the Wildcats finished 15th and 19th respectively. Galyer was just as impressive in the classroom as in the pool, earning the meets NCAA Elite 90 award winner for the highest cumulative GPA of athletes at the NCAA meet with a 4.0.