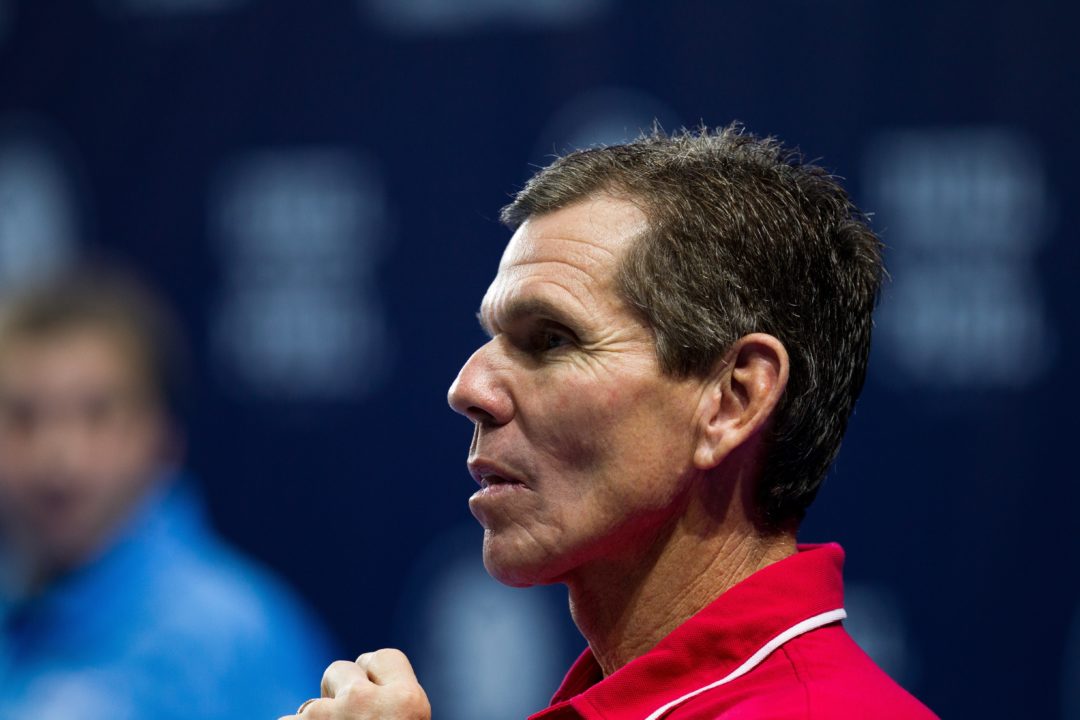 Busch has been heading up the national team since 2011, overseeing the past two Olympics. Prior to that, he excelled as a head coach, mostly at the University of Arizona. Busch led the Wildcats as well as the program’s companion club/professional training hub Tucson Ford Dealers Aquatics.

With Busch retiring, USA Swimming will be seeing a complete overhaul of its high-level staff in the coming year. Executive Director Chuck Wielgus will also retire at the end of August. USA Swimming is currently in the hiring process for a new executive director, who will work with the new National Team Director when the fall 2017 season begins.

The full press release from USA Swimming is below:

“Frank has constructed a National Team culture that is rooted in personal accountability, integrity, hard work, teamwork, goal-setting and the values that come with the continual striving for excellence. The results speak for themselves with the great success we had at the 2012 London Olympic Games and again this past summer in arguably the greatest performance ever by an Olympic swim team with 33 medals in Rio,” USA Swimming Executive Director Chuck Wielgus said.

Team USA won 64 medals – 32 of them gold – over the past two Olympic Games, including 33 total medals last summer in Rio de Janeiro and 31 at the 2012 London Games. Over the past three long-course FINA World Championships, Team USA has combined for 81 medals, 38 of them gold.

Busch will continue in his current role through this summer’s 2017 FINA World Championships in Budapest, Hungary.

“I’m forever grateful to Chuck for giving me the opportunity to lead USA Swimming’s National Team division. It was the gold standard internationally long before I arrived, and the people that I’ve been able to work with over the last six years are remarkable people and the best in the world at what they do,” Busch said.

“In my coaching career I believed that every athlete’s personal growth was as important as their success in the pool, and that’s an underlying current of everyone that works in the National Team division. Working with the best in the world is a dream come true for anyone, and I have certainly lived that dream. It’s been an incredible team effort with everyone that works at USA Swimming. They all believe in achievement and they all work hard toward it.”

Busch added, “The National Team division has grown three of its most important areas – high performance, National Junior Team development and athlete services – into truly great models that every swimmer and coach in this country can be proud of.”

Prior to joining USA Swimming as National Team Director on May 1, 2011, Busch was a standout collegiate and club coach, most recently at the University of Arizona from 1989-2011. There, he guided the Wildcats to men’s and women’s NCAA team titles in 2008 and a combined 25 top-five finishes at the NCAA Championships. His club affiliate, Tucson Ford Dealers Aquatics, also earned USA Swimming national championship titles under his leadership.

During his coaching years, Busch was named to numerous coaching staffs for USA Swimming, including the 2004 Athens Olympic Games and 2008 Beijing Olympic Games. In addition to his contributions to American swimming, Busch has coached athletes from over a dozen other countries to international success.

Busch has been the recipient of multiple coaching awards including United States Olympic Committee (USOC) and USA Swimming Coach of the Year. He is a six-time NCAA Division I Coach of the Year and earned the Pac-10 Conference Coach of the Year award 11 times. He was inducted into the American Swim Coaches Association (ASCA) Hall of Fame in 2008.

Not everyone liked Frank Busch or Chuck Wielgus, apparently.

Who’s USA Swimming for if not for the swimmers.

you have the right facts? i think less swimmers might have gotten stipends as the quad moved on but the swimmers got more money.

I don’t see any difference.. the pool of money available is going to fewer swimmers and that is the point. The message being sent is that the elite just got more elite. The exception to the rule is the swimmer who comes out of no where from a 25 yard pool w/little exposure to the national competition. Most need a broader exposure to realize their fullest potential. USA Swimming is a business and there isn’t an endless pot of money.. I get that, but at the same time it just makes me sad to see things like this:

Peace out Frank. Made questionable hires at USA swimming, played favorites, and ran off some great people. Next person will be a step up.

In my opinion, things at USA Swimming have only gotten better during Frank’s tenure. I think some of the key people on the national team staff were already in place prior to Frank being there. Frank’s leadership and their counsel, lead to some successful team performances in the last two olympics. Good luck Frank in the next chapter!

Frank, you will be missed just as you were missed when you stepped down from the University of Arizona. You, your staff and swimmers always treated our team and staff with great respect. we always enjoyed competing against you. Good luck

You will be missed Frank just as you were missed when you stepped down from coaching. I will always remember how well you treated my team when I was coaching against you. You always made us feel like we were a tough opponent. And than afterwards you let us train with your team. We always enjoyed our meets with you. You, your staff and team were great hosts.

Frank, Thank you for your service to the sport of swimming at so many levels. A great Coach, Leader, and Person. Good luck to you.

Frank Busch is a CLASS ACT! Did a fantastic job at both Cincinnati and Arizona!

Best wishes to a great person, coach and Nat. Team director, who’ve I known for years going back to his club coaching days. He’s done an Awesome job wherever he’s been, only wished my daughters had him as a mentor. Enjoy whatever you’re doing next-as I don’t see you sitting around doing nothing.