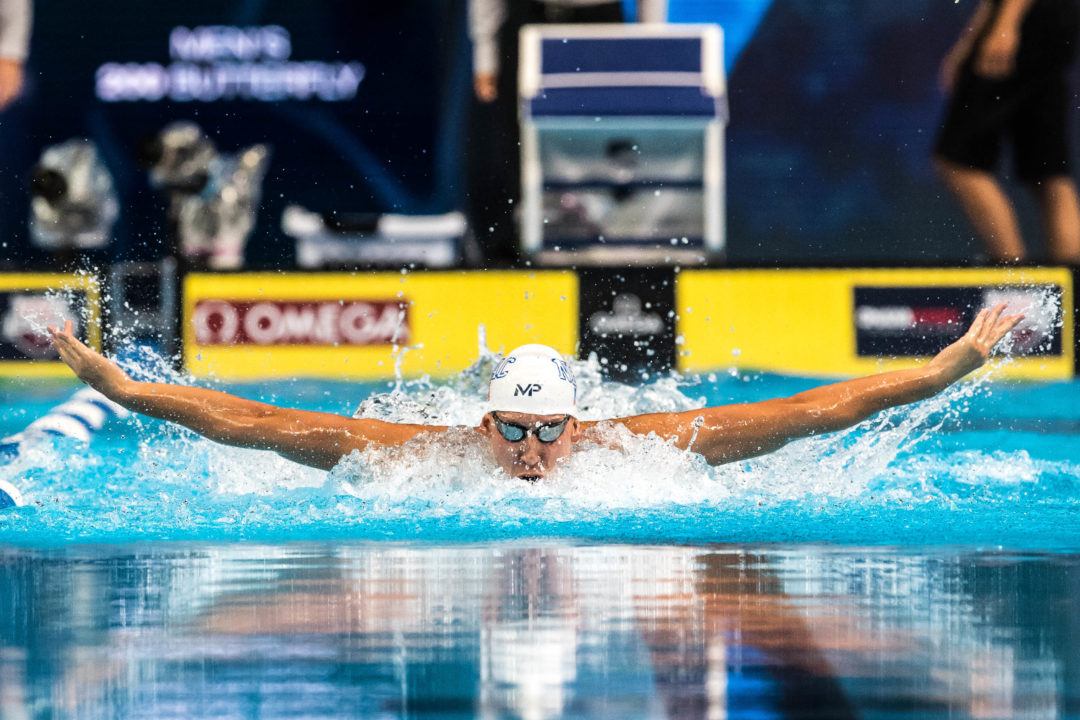 Chase Kalisz has to be considered the front-runner in the men's 200 fly tonight in Indianapolis. Archive photo via Mike Lewis/Ola Vista Photography

Despite just two events on the schedule at this morning’s prelims (with distance heats this afternoon), there was plenty of buzz generated with some great swims and some surprising ones in Indianapolis as U.S. World Trials kicked off.

The women’s 200 fly started things off, with 2016 Olympian Hali Flickinger and 17-year-old up and comer Dakota Luther solidifying themselves as the women to beat tonight with a pair of 2:08s. Katie McLaughlin qualified 4th overall in 2:10-flat, and was the fastest going out at the 100 among all swimmers. Look for her to push the front end again tonight and try and hang on for a spot.

Sarah Gibson of Texas A&M had the fastest back half of anyone this morning, and will challenge for a spot as well after cracking 2:10 for the first time. The biggest surprise from the event was Cassidy Bayer, who finished 3rd at the Olympic Trials, missing the A-final in 2:11.22 for 12th overall. Along with Bayer, Hannah Saiz and Ruby Martin also missed the A-final, meaning three of the top four seeds coming into the meet will swim in the consolation heat tonight.

The men’s 200 fly had a similar surprise when 2016 Olympian Tom Shields missed the final in 9th, meaning the U.S. will have two first time representatives in this event on the international stage.

The Georgia guys looked phenomenal this morning, with Chase Kalisz, Gunnar Bentz, Pace Clark and Mick Litherland all registering lifetime best times to advance to the final. The race for a spot likely comes down to Kalisz, Bentz, Clark and Jack Conger tonight. Though it’s hard to say who looked good and who didn’t this morning with all the times being so close, it was hard to argue with how strong Kalisz and Bentz looked.

Conger was actually the only one of the eight finalists who didn’t get a best time in prelims, as Justin Wright, Zach Harting and Miles Smachlo all went PBs as well. In the B-final we’ll see a very young group including six teenagers, led by Sam Pomajevich of Nation’s Capital.

The women’s 100 free was also a bit of surprise as Mallory Comerford put up a LC National Meet Record in 53.26, nearly seven tenths under her best time. Olympic gold medalist Simone Manuel looked very comfortable taking 2nd in 53.5, and Kelsi Worrell looked great as well swimming under 54 for the first time for the #3 seed.

Lia Neal, Olivia Smoliga and Katie Ledecky all made it through as well, and those six would have to be considered the favorites to make the relay. Individually, Manuel and Comerford would have to be favored with Worrell and Neal in striking distance if one of them slips up.

The other two A-finalists, Caroline Baldwin and Veronica Burchill, had breakthrough swims to get in and could upset one of the more established names for a relay berth.

Another one of the major surprises was 2016 Olympic finalist in this event Abbey Weitzeil back in 15th this morning at 55.48. Though it’s no secret she hasn’t been on great form this season, it was a bit of a surprise to see her out of the A-final after winning the Olympic Trials a year ago. Amanda Weir, who was an Olympian last year in the relay, also missed the final.

Maybe the biggest surprise of them all this morning came in the men’s 100 free, where Auburn’s Zach Apple put up a time of 48.14 to demolish his personal best and head into tonight as the top qualifier. After everyone thought Nathan Adrian and Caeleb Dressel had the two individual spots in this event locked down, Apple’s swim now puts that at risk.

Townley Haas also had a huge best time this morning in 48.56, and is in prime position to snag a relay spot after being just 49.9 last year in Omaha. Also in the field tonight: Ryan Held, Blake Pieroni, Ryan Murphy and Michael Chadwick. This field is stacked to the brim and is going to be very exciting.

19-year-olds Justin Ress, Maxime Rooney and Michael Jensen highlight tonight’s B-final, which will be very exciting as well with the field separated by half a second.

The fastest heats of the women’s 800 and men’s 1500 will also go off tonight. Katie Ledecky and Leah Smith are the obvious favorites in the 800, while the 1500 is a little more wide open. Look for youngsters Robert Finke and True Sweetser to make some noise. After the early heats, Summer Finke and Kevin Litherland lead the way in the 800 and 1500 respectively. Check out the live recap of this afternoon’s distance heats here.

Along with the ‘A’ and ‘B’ finals, each event will also have a ‘C’ final featuring swimmers 18 & under.

How tall is Zach Apple?

Can’t find anything on the Auburn site but he looks to be about 6’3″-ish(?)

I want to see a conger Kalisz shootout in that 2 fly. Bentz surpised this AM

What time do finals start tonight?

6 PM EST, about half an hour away!

It wasn’t that long ago Chase Kalisz had a weak butterfly. And it seems his backstroke is improving exponentially. It will be exciting to see the fight for a medal at worlds. It might take a 4:07 to get a medal. Wow.