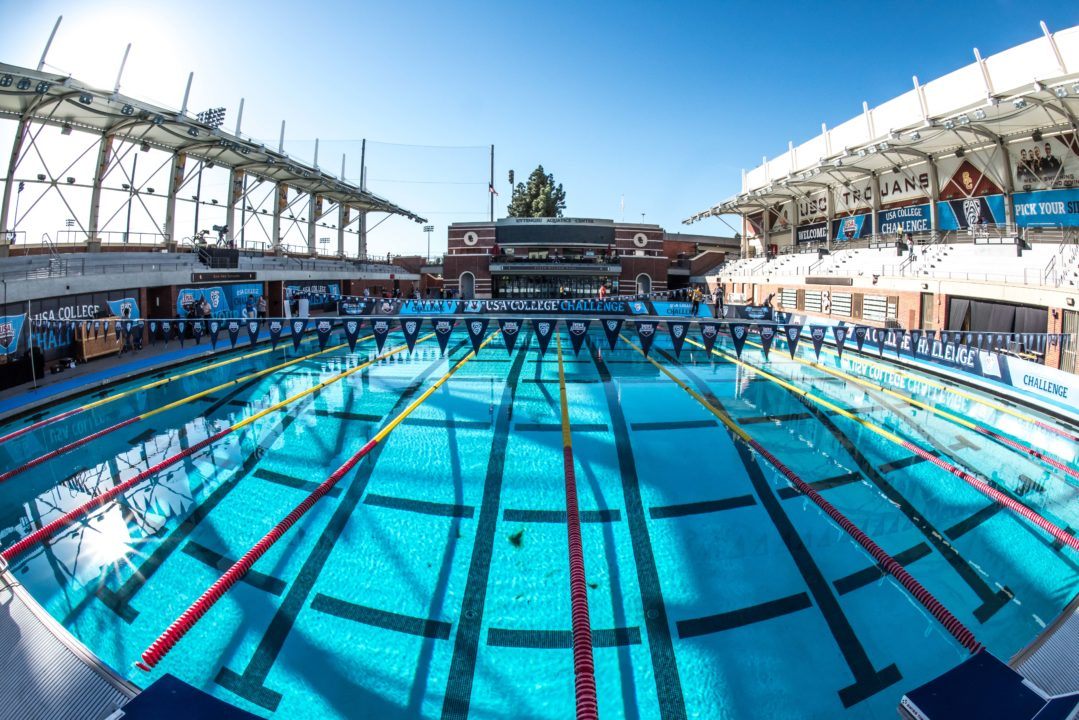 The top stars from the USA National Team and the Pac-12 Conference square off tonight and tomorrow in the 25 yard pool at the 2017 USA College Challenge. Current photo via Mike Lewis/Ola Vista Photography

The second-ever USA Swimming College Challenge kicks off tonight in Los Angeles, CA.  This unique event features some of the top USA National Team swimmers, including professionals and high schoolers against the top stars from the Pac-12 Conference.

On paper, the Pac-12 squad should have the advantage on the women’s side, as their lineup features Olympic gold medalists like Kathleen Baker, Katie Ledecky, and Abbey Weitzeil.  There’s plenty more star power, and the college ladies should have enough depth to overcome the loss of Simone Manuel.

On the men’s side, the USA National Team will feature a strong mix of veterans (Matt Grevers), recent NCAA stars (like Ryan Murphy and Jack Conger), and younger swimmers (like Michael Andrew and Daniel Krueger), but will definitely have their work cut against a very solid Pac-12 team.

Well, it didn’t take long for the script to get flipped.  Sure enough, Kathleen Baker stormed out to a lead for the Pac-12, finishing in a very strong 51.05.  But Team USA’s Molly Hannis blew away the field on the breakstroke leg and built a two bodylength lead by the time she touched.  Hellen Moffit and Lia Neal (a former Pac-12 swimmers herself) held off the dangerous combination of Louisse Hansson and Abbey Weitzeil to touch in 3:28.37.  The Pac-12 women mitigated some of the damage by finishing 2nd and 3rd.

Once again, it was a close race after the first leg, with Ryan Murphy taking it out in 46.30 to Ralf Tribuntsov’s 46.38.  It was all Team USA from there, as Cody Miller pulled ahead with a 52.23, followed by Tom Shields (44.52) and Jack Conger (43.21), as the USA “B” team won in 3:06.26.  It was a 1-2 USA sweep, thanks to high schooler and Texas commit Daniel Krueger holding off USC’s Dylan Carter with a 42.53 split.  With several of the post grads sporting beards, it doesn’t look like most of the National Team guys are anywhere close to rested/tapered for this meet.  But, on the basis of the first event, it doesn’t look like they’ll need to be in order to win.

No surprises here.  Stanford’s Katie Ledecky, representing Pac-12 casually cruised to a 4:28.75, the 7th-fastest time ever.  USA’s Melanie Margalis picked up 2nd place with 4:36.29, while Pac-12 took the next two spots thanks to Katie Drabot (4:37.51) and Hannah Cox (4:38.64).  Those times by Cox and Drabot are both faster than what each swimmer did in the prelims of last year’s NCAA Championships, and would have been enough to earn them some points.  Madison Homovich (4:39.74) and Kendall Dawson (4:51.30) were the final two finishers.

For a couple minutes it looked like it would be a repeat of some of last summer’s USA Nationals races, as Zane Grothe and Clark Smith went out together.  But Grothe pulled away from the field, while Smith fell back as the race went on.  In the end Grothe touched in 4:13.63, while Mitch D’Arrigo outdueled Grant Shoults over the final 50 and took 2nd for Team USA.  D’Arrigo touched in 4:15.33, Shoults in 4:15.41.  Smith finished 4th in 4:18.09, while Sean Grieshop and True Sweetser finished 5th and 6th with times of 4:21.32 and 4:23.63.

USC’s Louisse Hansson looks to be in solid form early in the season, as she jumped out to an early lead and never looked back en route to 51.28 finish and the victory.  Team USA earned back some points with 2nd and 3rd place finishes by Amanda Kendall (51.97) and Hellen Moffitt (52.11).

This one was tied up through the first 100, with Kathleen Baker inching ahead of Regan Smith at the 175 mark. Baker took the win for Pac-12 in 1:50.62, with Team USA’s Smith following in 1:51.30. Third went to Stanford’s Janet Hu, 4th to Lucie Nordmann, 5th to Washington’s Jasmine Margetts, and 6th to UCLA’s Sandra Soe.

With this race, the Pac-12 team moves into the lead with the score standing at 84-83.

Wow. I forget how not so great the pac-12 breaststroke is.

13
-9
Reply
On Fleek
Reply to  AvidSwimFan

Guess it’s really hard to predict who’s faster this early in the season or who’s the hotter hand right now. Don’t envy the coaches having to decide on the best possible relay lineups with all these unknowns!

32
0
Reply
Swammer
Reply to  On Fleek

That’s a great split by Weitzeil this early on in the season!

That was encouraging, until her 48 in the individual event.

If you’re familiar with her history, Weitzeil’s a team player. Has more often than not gone faster when helping her teammates in a relay over her individual races. Does tend to falter a bit from her very best when tackling a busy schedule. But that can be addressed in her training over time.

They have them now