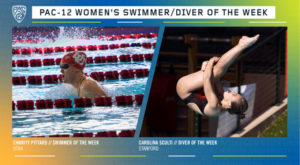 UCLA Takes Down San Diego and Harvard in Los Angeles

Kenisha Liu won the 200 free and 50 free for the Bruins on Monday.

Ricardo Vargas of Michigan swam the fastest time in the NCAA in the men’s 1650 on day 4 of the Georgia Invite.

Freshman Katz Comes up Big with 45.3 100 Back Split at Texas Invite

Texas freshman standout Austin Katz was a key player in helping the Horns secure their NCAA spot. Despite their A relay being disqualified, Katz came up big with a 45.34 backstroke split to help the B relay to victory.

Kenisha Liu picked up two wins as the Bruins won their own quad meet this weekend.

UCLA were victorious over both UCSB and Oregon State at the tri-meet they hosted October 24.

Bellarmine boys claimed their 31st CCS title in as many years, while Mitty girls finally took home the big trophy after several years of finishing second and third.

2015 CIF Central Coast Section Preview – Can Anyone Stop Bellarmine in its Quest for 31?

Bellarmine senior Aidan Burns is looking to defend his CCS titles in the 200 and 500 freestyle events at this weekend’s championship meet.

SCSC’s Sandra Soe is the latest verbal commitment to UCLA.