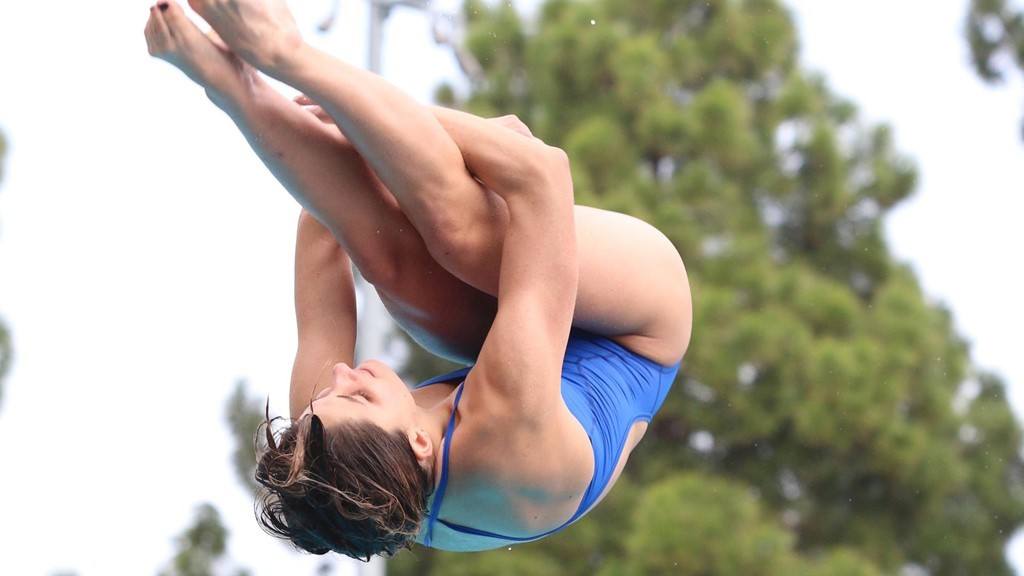 The UCLA women’s swimming and diving teams wrapped up their fall campaign on Sunday against the University of Hawaii.  The Bruins topped the Rainbow Wahine 231.50-65.50, racking up 14 first-place finishes in as many events.  Sophomore Eloise Belanger swept the boards, putting her at eight wins on the season.

200 Medley Relay
The UCLA foursome of Linnea Mack, Isabella Goldsmith, Katie Grover, and Caroline McTaggart kicked things off by posting the top time in the 200 Medley Relay (1:44.30).  Also finishing in the top five was the Bruin B squad.  Madison White, Sarah Kaunitz, Amy Okada, and Savannah Steffen checked in at fourth with a 1:45.54.

1000 Freestyle
In the first individual event of the meet, Margaux Verger Gourson and Katy Campbell went 1-2 in the 1000 Free.  Verger Gourson clocked a 10:07.66 to finish 12 seconds ahead of Campbell in second.

100 Backstroke
The Bruins tallied five top-eight finishes in the 100 Back, led by White’s first-place time of 54.91.  Madison Varisco and Delisle also finished in the top five.  Varisco placed fourth (57.90), followed by Delisle in fifth (58.53).  Natalie Amberg and Kwok checked in at seventh and eighth, respectively.

200 Backstroke
White registered her second win of the meet in the 200 Back.  The senior swam a 1:58.88 to beat Hawaii’s Tahna Lindquist by four seconds.  Delisle and Amberg placed fourth and fifth, respectively.

100 Butterfly
Okada completed the sweep of Sunday’s butterfly events when she registered a win in the 100 Fly.  With a 56.06, Okada edged Grover in second (56.97).  Steffen and Varisco placed fourth and fifth, respectively, while Burnham checked in at 10th.

Rounding out the Bruins competing in the diving events, sophomores Madeline Russell and Traci Shiver finished 10th and 11th, respectively, in the 3-meter.  In the 1-meter final, Shiver placed 10th and Russell finished 12th.

The Bruins return to action in the New Year when they host Kansas and Boise State Jan. 6 at 12 pm PT.  Closing out the 2016-17 home campaign the following weekend, the swim team welcomes Utah Jan. 13 while the diving team hosts the Bruin Diving Invitational Jan. 13-15.

The Oregon State women’s swimming team recorded a split Sunday at a tri-meet while on their training trip in Hawaii this past weekend. The Beavers fell to the University of Hawaii, 189-102, but picked up the split recording a 172-111 against Dartmouth College.

Juniors, Allie Kilroy and Corrine Shigeta, added points for the Beavers as they finished first and second, respectfully in the 100-yard breaststroke.

In the 200-yard butterfly, senior Jesikah Cavanaugh took first place with a time of 2:09.32.

Senior Sophie MacEwan also finished well in the 50-yard freestyle, as she finished second with a time of 24.07.

Oregon State capped off the day with a first place finish in the 400-yard free relay posting a time of 3:31.93.

Oregon State will return to Corvallis on December 29th before heading to the desert on January 5th for dual meets against Arizona State, Arizona and Northern Arizona.