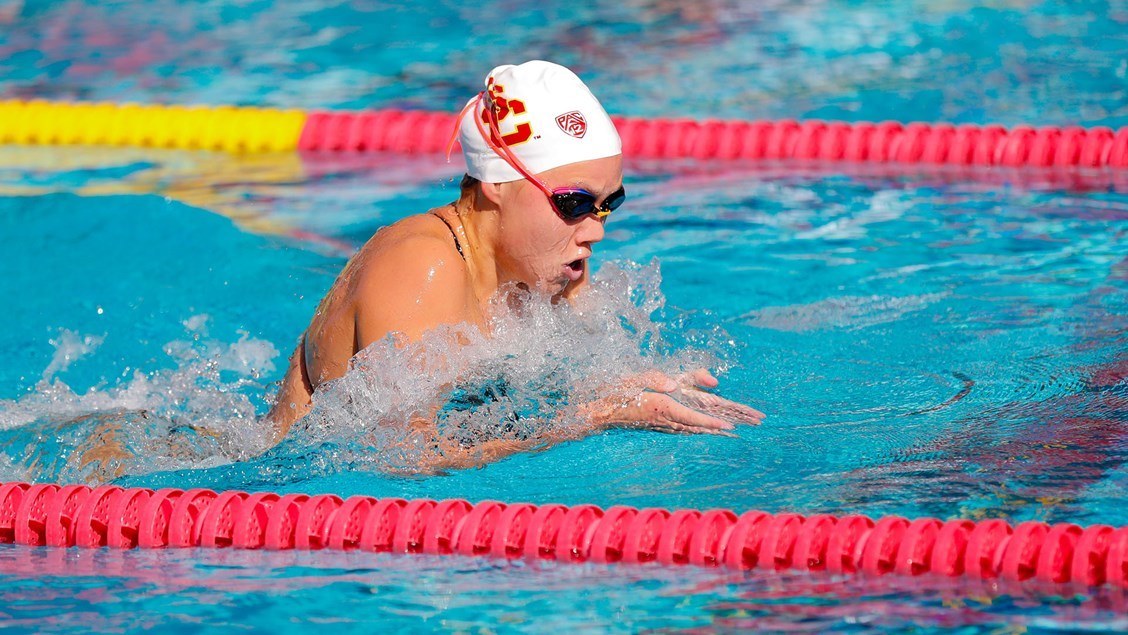 High school junior Eleni Gewalt will bring B final-ready times in the 100 and 200 breast to Arizona when she begins in the fall of 2022.

55.8/2:00 backstroker Katelyn Buono from Reno Aquatic Club has verbally committed to Utah for the 2022-23 school year and beyond.

Kipp allegedly kicked a water bottle that hit a swimmer in the face.

After a rare tie at 150-150 last season, the USC Trojans jumped all over their cross-town rivals UCLA on Friday at the Spieker Aquatic Center.

The highlight of the meet came in the day’s opening event, where USC senior Louise Hansson split a 22.27 on the butterfly leg of USC’s winning 200 medley relay (part of a Trojan 1-2). That’s faster than she went at NCAAs last season, where her 22.33 split was the fastest in the field. In fact, it’s the fastest 50 butterfly split since Arizona’s Annie Ochitwa split 22.23 in December of 2016 at a mid-season invite.

Senior Riley Scott added 3 individual event victories for USC in the meet. First, she won the 100 breaststroke in 59.68. Only American Record holder Lilly King and Florida State freshman Ida Hulkko have been faster in dual meets this season (Lindsey Kozelsky was also faster at the ACC-Big Ten Challenge). Scott then cruised to wins in the 200 breaststroke (2:09.30) and the 400 IM (4:14.06).

The Trojans completely stifled the Bruins in the fly. USC swept the 200 with senior Maddie Wright earning first in 1:53.08, sophomore Caitlyn Tycz finishing in second in 1:55.62, and junior Catherine Sanchez taking third in 1:55.91. In the 100, Troy went 1-2 as Tycz took first in 52.36 and sophomore Jemma Schlicht came in second in 52.55, recording a season best in the process.

USC also handled the breaststroke with ease, just as they have all season. Scott won the 100 in 59.68 and redshirt junior Kirsten Vose took third for USC in 1:01.03, coming in behind Claire Grover‘s 1:00.86 for UCLA. Later, the Trojans swept the 200, with Scott capturing first in 2:09.30 while Vose and freshman Isa Odgers took second and third in 2:11.19 and 2:11.39, respectively. Vose’s time was good for a season best and Odgers’ performance netted her a career best.

The Women of Troy found success in the backstroke as well. Despite UCLA’s Emma Schanz winning the 100, Transom took second in 53.67 and set her second career best in the meet while redshirt junior Hanni Leach‘s 53.88 was a season best. Meanwhile, Hansson won the 200 back in 1:53.97 for her second individual victory of the day.

The Bruins impressed in both long distance freestyle races and diving. Sandra Soe won the 1650 for UCLA in 16:02.88 as well as the 500 in 4:47.43 while her teammate Lisa Kaunitz took third behind USC senior Elizabeth Stinson. Eloise Belanger won both the 1 mtr and 3 mtr dive for UCLA.

In the final event of the day, the Bruins’ A team won the 200 free relay, finishing ahead of the Trojans’ A and B teams.

USC’s dominant Crosstown Cup win will certainly provide valuable momentum as the team turns its attention to the Pac-12 Championships, which begin on February 27 in Federal Way, Wash.

Senior diver Eloise Belanger was a standout for the Bruins, winning both the 1-meter and 3-meter diving championships.

She completed the sweep with a win in the 1m, posting a score of 314.40. She and second-place finisher Naomi Gowlett were separated by less than a point heading into their final dives.

Soe picked up a pair of wins in distance events. Swimming the mile for just the second time this season, Soe approached the UCLA’s school record with a final time of 16:02.88. That mark was less than three seconds off the school standard and qualified as an NCAA B Cut.

Despite the lengthy swim, Soe bounced back to win the 500 freestyle in 4:47.44. That time was her second best of the campaign.

Schanz claimed UCLA’s final individual event win of the afternoon with a 53.47 showing in the 100 back. It was both her best time in that event this year and an NCAA B Cut. Mara Newman (54.17, fourth) and Abriana Howard (54.55, fifth) both scored and posted season-bests in the 100 back as well.

Claire Grover was UCLA’s top finisher in the 100 breast. Her time of 1:00.86 narrowly missed a season-best and was just behind first place Riley Scott‘s 59.68.

Okada shaved nearly three seconds off her previous season-best in the 200 fly, coming in at 1:56.89.

Liu afforded herself well in the sprint races. Before the break, she placed second in the 50 free with a time of 22.61, making her the second Bruin this year to grab a B Cut in that event (Grover). After the break, she once again came in second at 48.56, a season-best and another B Cut.

UCLA returns to Uytengsu on Saturday for the platform diving championship, which starts at 10:00 a.m. Scores for that event will not count towards Friday’s totals.

Can’t tell if this is a meme now or not

Not a meme, Courtney Caldwell was a much anticipated top level sprinter/transfer 21/47 freestyler, who has yet to swim. It’s a fair question that people want an answer to…?

Why does no one ask where Katie Christy is?

I heard that usc didn’t even put in the lane lines in the race pool! UCLA was patiently waiting for the race pool to open but the pool was not set! No lane lines nor touch pads….

Petty, maybe a little unprofessional, but come on, its called rivalry week! :For example, it would be no different than posting the 2018 Football score of UCLA 34 USC 27 or that we are all looking forward to the upcoming Pac-12s where Stanford and Cal, the class of the league, who parenthetically both beat USC in football, compete to win with style and class! 🙂

What I really admire in a classy team is a good old spanking by the head coach when the swimmers don’t meet expectations.

Swim Parent – it’s possible that you were watching an early heat that UCLA won?

I believe this was the first heat of the free style events. I know there was a mix up where the timing systems didn’t catch the accurate time for first place in both the 50 and 100. They went off the timers (usc men’s team) when this timing situation occurred. Not sure how accurate it is compared to the omega touchpads

the usc men’s team was VERY accurate at timing, much better than those outdated touchpads

I take offense to that.

Mm I don’t think so, i watched the first heat in both

Score board management was more like “Score Bored” as whomever was operating the system paid little interest to details…like displaying, of 2/3rds of the meet as the “USC vs Cal” meet. 🙂