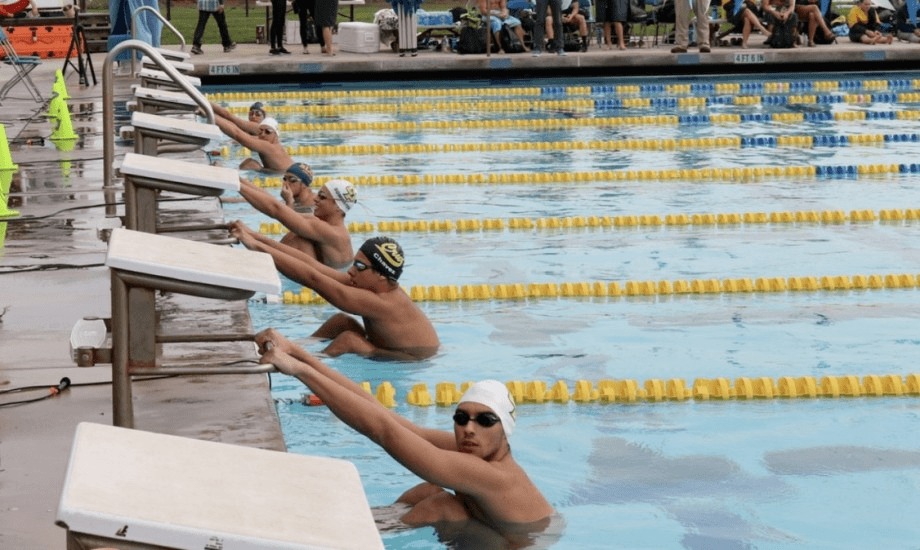 For the men, UC Santa Cruz held onto its lead at the top of the standings by 37 points. while Cal State East Bay pushed its lead to 32 points on the women's side at the PCSC Championships. Current photo via Pacific Collegiate Swim Conference

LA MIRADA, Calif. — The penultimate day of the 2019 PCSC Championships saw both the swimmers and divers return to action at Splash! Regional Aquatics Center. For the men, UC Santa Cruz held onto its lead at the top of the standings despite a strong push from Fresno Pacific to cut the gap to just 37 points. On the women’s side, Cal State East Bay pushing its lead to 32 points over Fresno Pacific and 64 points over Pepperdine heading into the final day of the meet.

Fresno Pacific’s men got to work cutting down the Banana Slugs’ lead right away as Dmitry Belolipetskiy and Kyle Jones claiming first and second, respectively, in the 100 butterfly, followed by Biola’s Raymond Kam. The Sunbirds claimed another two spots on the podium in the next event, the 400 individual medley, as Dylan Sewell and Christian Meyer finished second and third behind the Eagles’ Kyle Benjamin.

Concordia and FPU followed that up with another repeat in the top three in the 200 free. The Eagles’ Austin Barton took the title in 1:39.67 ahead of Jones (1:41.82) and Zach Peltzer (1:42.41), who added another 55 points for the Sunbirds. Fresno continued to rack up the points in the 100 breaststroke, with Matheus Misquito taking the title after out-touching teammate Belolipetskiy. Kam finished third to give Biola another 27 points.

In the 100 backstroke, FPU’s Iskender Baslakov grabbed the Sunbirds’ third men’s title of the day. Biola’s Matthew Roe and Clayton Owens rounded out the podium spots to collect another 55 points for the Eagles.

Azusa Pacific’s Elodie Poo Cheong earned her first individual title of the meet to open finals on Friday, claiming the 100 butterfly victory in 54.44. Alaska-Fairbanks Oda Bygdnes finished second (55.11) and East Bay’s Allie Klinger took third (55.66). The Pioneers also had Victoria Zukeran (5th), Vivy Hua (7th) and Tatum Roepke (8th) in the final to give them 97 points in the event.

The 400 IM saw Fresno Pacific make up some ground in the standings as Morgan Coddington and Luisa Roderweis finished second and third, respectively, behind the Cougars’ Abby Wiet. Loyola Marymount’s Isabel Willis followed with a win in the 200 freestyle to give the Lions their first title of the meet. Concordia’s Madeleine Dodge and Pepperdine’s Sammie Slater rounded out the podium places.

The Sunbirds’ Olga Tovstogan took home her second individual title of the meet in the 100 breaststroke, beating Pepperdine’s Juju Chan by nearly three seconds. Meanwhile, Arizona Christian claimed its first podium spot of the meet as Vikte Labanauskaite finished third in the event. Concordia’s Katelyn Thomas (56.00) wrapped up the individual titles for the day with a win in the 100 backstroke, out-touching Fresno’s Arianne Kooijinga (56.55), who beat out LMU’s Abby Chopp (57.45) in third.

The 400 medley relay rounded out the women’s program on Friday and saw the Sunbirds’ Shelbi Hayzlett, Tovstogan, Cara Le and Kooijinga claim the team’s first women’s relay title of the weekend. In a close finish, FPU out-touched Azusa Pacific’s Wiet, Holly Williams, Cheong and Riley Smith in second. The Pioneers got back onto the podium with a third-place showing to end the day at the top of the team standings as Roepke, Rebecca Bay, Zukeran and Klinger narrowly beat out Alaska.

Prelims are set to begin at 9:30 a.m. on Saturday and finals will start at approximately 4:30 p.m. at Splash! Regional Aquatics Center in La Mirada. The conference’s seniors will be honored at 3:30 p.m., while meet awards will be handed out immediately following the last race of finals. For more information about the meet, click here. To watch a live stream of the meet ($9.99 for the entire meet), click here.