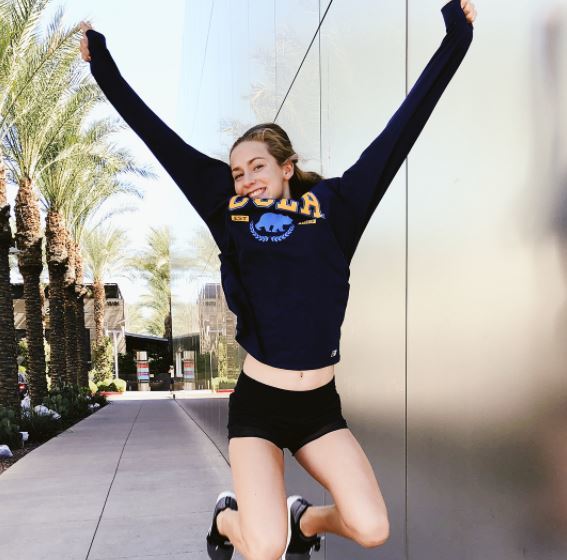 Chloe Isleta led the charge for the ASU, taking home wins in the 100 back, 200 back, and 200 IM. Stock photo via Claire Grover

UCLA handled Arizona State in a Pac-12 dual meet on Saturday, November 3rd. The Bruins took 11 of 16 events, inlcuding both relays and a sweep of the diving events. UCLA freshman Claire Grover was instrumental for the Bruins, clocking 2 individual event wins and helping 2 relays to victory. Grover swam a season best 1:02.90 to claim vioctory in the 100 breast. Grover then won the 100 free with a 50.50. Grover was 6th at the 50 mark (25.18), but roared home in 25.32, nearly negative splitting the race. Grover also split 1:01.67 on the breast split of the 400 medley relay, marking the fastest breast split in the field. She then capped off her meet by leading off the 200 free relay in 23.21.

Redshirt senior Maria Polyakova had a banner day in the diving part of the competition to lead the Bruins (3-0) to victory. The Moscow, Russia native set new school and Dirks Pool records with a 355.50 score in the 1m, shattering her previous mark of 339.05 by 16.45 points. That result put UCLA over the 150-mark and clinched the win.

Earlier in the day, Polyakova secured a first-place result in the 3m with a season-best score of 339.75.

“That’s about as strong as Maria has performed during her time here,” said UCLA head diving coach Tom Stebbins. “This has been a strong period of work for our team, but we’ve been focusing on being more relaxed and loose, and that showed today.”

The Bruins got off to a strong start on Saturday, winning the first two events and placing two of the top three-finishers in the third.

UCLA’s A Team in the 400 medley relay opened the meet with a win, taking first at 3:48.40 and edging out ASU’s top relay by less than a half-second.

Soe followed up with a solid showing in the 1000 free, touching in 10:05.98 and beating the second-place finisher by almost eight seconds.

The 200 free was a dramatic race, as Kenisha Liu battled for the lead with a trio of Sun Devils over the first half of the race. While Liu (1:51.13) ended up missing out on first by a hair, freshman Delaney Smith surged over the final 50 yards to take third place at 1:51.44.

In the 200 fly, Amy Okada continued her dominance with a first-place finish of 2:00.65. She has won the 200 fly in all three of UCLA’s dual meets this season. She finished off a sweep of the fly events later in the morning with a first-place time of 55.14 in the 100 fly. The latter win put the Bruins on the precipice of victory.

Maisie Jameson sent the Bruins into the first break on a positive note, placing first in the 50 free at 23.60 for her first event win of the season. Ella Kirschke also netted key points for the Bruins with a third-place finish at 23.82.

At the first break, UCLA enjoyed an 85-65 advantage over the Sun Devils.

The start of the second half of the day was marked by a strong 100 free for the Bruins, which had three of the top-four finishers including winner Claire Grover (50.50). Liu (51.18) and Kirschke (51.26) had solid showings as well to round out UCLA’s scorers.

Soe wrapped up a dominant meet with another win in the 500 free, finishing in 4:56.46, the lone swimmer to break the five-minute mark.

UCLA continues its homestand next weekend, hosting UC Santa Barbara and UC San Diego at Spieker on Saturday, Nov. 10. The diving team will go across town for the USC Diving Invitational from Friday, Nov. 9 to Sunday, Nov. 11.

LOS ANGELES, Calif. – Chloe Isleta notched three wins in three individual events, including sweeping the backstroke for the third time this season, and Erica Laning contributed her third 200 freestyle victory of the season on Saturday morning at UCLA.

Isleta once again swept the backstroke events, which she has done in all but one of the Sun Devils’ meets this season. The California native raced to a first place finish in the 100 and 200 back, and added a win in the 200 IM to cap off an impressive day for the junior.

In the diving well, Ashley McCool and Frida Kaellgren combined to put points on the board for the Sun Devils, with McCool placing second in both the 1M and 3M, while Kaellgren placed third in both events. McCool was just eight points behind Maria Polyakova in the 3M springboard, who won that event en route to being named Pac-12 Diver of the year in 2016-17.

Freshman Ruby Martin continued her dominance in the butterfly stroke against the Bruins, swimming to a second-place finish in the 200 fly and third in the 100 fly. Martin has had a podium finish in five of her seven races in the butterfly.

The Sun Devils take two weeks off to train and are back in action on Nov. 14 and 15. The swim and dive squads will part ways, as diving heads to the Texas Diving Invitational while the swimmers head to the Indiana Invitational. Fans can keep up with the action all season long by following @ASUSwimDive on Twitter.

Great job Claire! UCLA is lucky to have you!!!