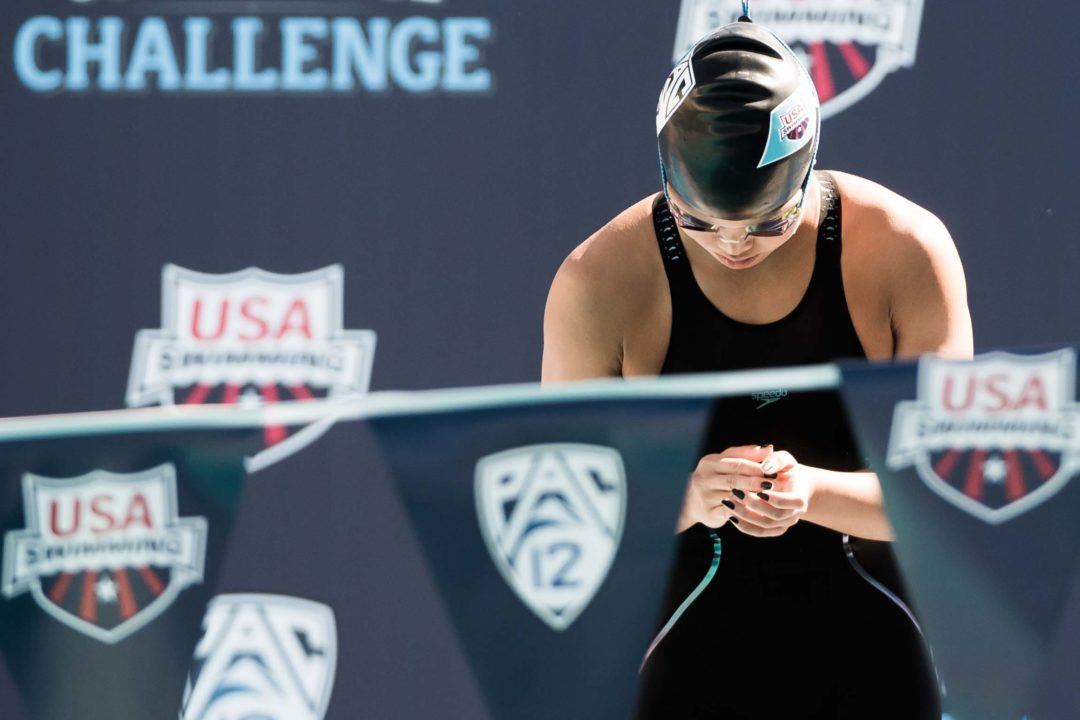 Kenisha Liu picked up two wins as the Bruins won their own quad meet this weekend. Current photo via Mike Lewis/Ola Vista Photography

The UCLA women cruised to victories over all three teams that visited in Los Angeles this weekend, claiming wins over Arkansas, UC Davis, and Washington State.

UCLA posted the fastest time in both the 200 medley and 400 free relays, with Grover splitting a 49.92 on their 400 free relay, while Sarah Kaunitz contributed another individual victory with a 1:03.47 in the 100 breast.

Washington State had a sole win thanks to Hannah Bruggman, who was 23.64 to win the 50 free.

The quartet of Schanz, Sarah Kaunitz, Grover and Liu teamed up to give the Bruins’ their first win of the day, completing the 200 Medley Relay in a time of 1:42.56. The “B” team of Jennifer Lathrop, Isabella Goldsmith, Amy Okada and Carly Reid finished third with a time of 1:44.66.

In the first distance event of the day, Soe’s time of 9:59.86 was 7.10 seconds faster than the Razorbacks’ Peyton Palsha. That would mark the first of five straight individual wins for the Bruins, as Liu would follow suit next, winning the 200 Free with a time of 1:49.13.

Schanz would narrowly edge Emily Cook of Washington State by two hundredths of a second, checking in at 55.39. Lathrop’s third-place time of 56.30 was good for third

In diving, Arkansas’ Brooke Schultz had a big day, setting one pool record and narrowly claiming another. In the 1-Meter competition, the freshman totaled a score of 323.50. Bruin Eloise Belanger finished second at 303.20, while Ciara Monahan and Alice Yanovsky finished fourth and fifth, respectively. Schultz returned later in the day to set the Dirks Pool-best score of 345.20 in the 3-Meter event. Monahan, Yanovsky and Belanger finished 3-4-5.

Arkansas tallied victories in back-to-back swimming events down the stretch, with Chloe Hannam (1:58.48) taking the 200 Back by less than a second ahead of Lathrop, and Sydney Angell (2:16.97) defeating Schanz (2:17.15) by a narrow margin.

Soe and Palsha again finished 1-2—this time in the 500 Free—when the Bruin junior clocked in at 4:53.40, just over a second ahead of the Razorback freshman.

UCLA’s Pink Meet, which annually donates contributes to women’s health in the name of breast cancer awareness, began in 2015. The $5 admission charged to fans goes directly to the Iris Cantor-UCLA Women’s Health Center.

Hate that all these schools don’t have a Men’s Team.