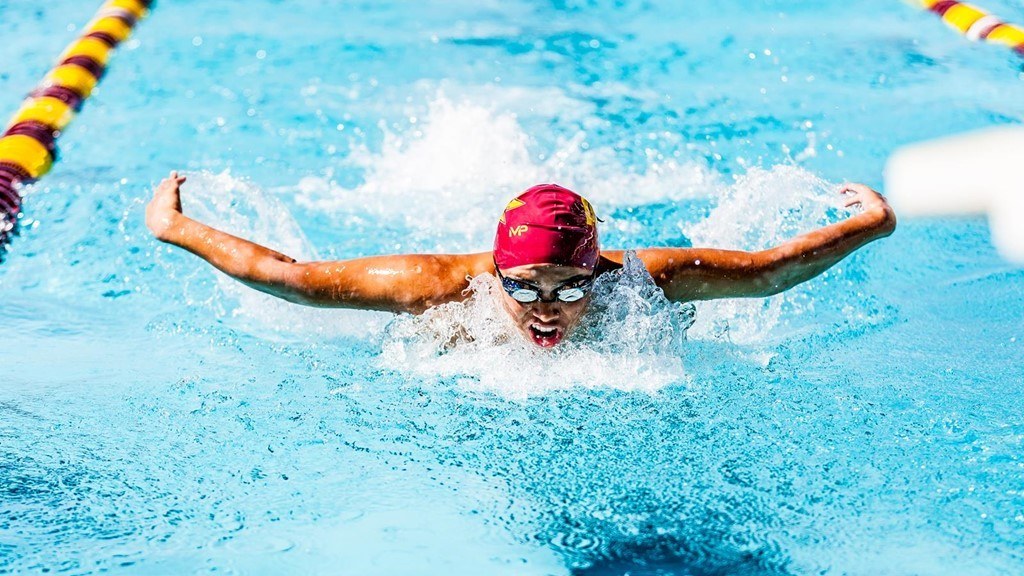 Chloe Isleta and Silja Kansakoski both won two events for the Sun Devils, while Kaitlin Grover picked up a pair for the Bruins.

The 50 free was an extremely tight race, with ASU‘s Katherine Wagner prevailing in 23.47 over teammate Claire Fisch, who went 23.48.

“It’s a long season and we’re getting to the halfway point,” said head swim coach Bob Bowman. “We just want to go to Texas and see significant improvement from what we’ve done so far and take it from there. Our women’s team is so young – we’re only going to lose one senior this year – and just figuring it out, and they’re doing such a great job. A lot of it is because of their attitude; they’re really in the group dynamic. It’s very healthy and I love it.”

The Sun Devils’ A-relay team won both relays to start and cap the meet, including a photo finish in the 400 free relay, with ASU finishing just .12 ahead of UCLA‘s A-team.

Chloe Isleta won two of three individual events she competed in, also part of the winning 200 medley relay team. Her 200 back time was good enough for an NCAA B-cut.

“Chloe [Isleta] has been training fantastic,” said Bowman. “What we want to do with Chloe is we want to get her to NCAA and score points. I think she’s on track to do that.”

In diving, the Sun Devils performed well in the 3-meter, led by Mara Aiacoboae in first, Ashley McCool in second, and Frida Kaellgren in fourth. McCool and Kaellgren finished third and fourth in the 1-meter.

“One of our freshmen, Ashley McCool, was very solid, as she has been so far early in the season,” said head diving coach Mark Bradshaw. “Mara Aiacoboae on the 3-meter was just fantastic. She struggled the last two days on the 1-meter, but she came back like a champ on the 3-meter.”

Arizona State got things started with a 200 Medley Relay victory, as its “A” team finished their run in 1:42.50. The UCLA “A” quartet of Emma Schanz, Isabella Goldsmith, Amy Okada and Sarah Kaunitz finished a close second at 1:43.90.

The 1000 Free was a close one, as the top three competitors were separated by less than three seconds. Arizona State’s Caitlyn Wilson would finish first with a time of 10:05.05, while Bruin Sandra Soe was slotted second at 10:07.51.

The first Bruin win of the day came by way of Kenisha Liu, whose 1:49.14 was more than a second better than Arizona State’s Erica Lanning. Olivia Andrew (1:52.71) notched two points for UCLA with a fourth-place finish.

Arizona State won its second event in a row when Silja Kansakoski topped the 100 Breast field in a time of 1:02.60. Emma Cain, who competed for Scottsdale Aquatic Club in Arizona, finished fourth (1:04.54). Goldsmith came in fifth (1:04.74).

Bruins went 1-2 in the 200 Fly, as Okada collected a first-place finish by nearly three seconds over teammate Marie-Pierre Delisle. Allison Goldblattrounded out the top five for the Bruins, clocking in at 2:05.73.

The top five finishers in the 50 Free were separated by less than one second, with Arizona State’s Katherine Wagner narrowly taking the top spot with a time of 23.47. Grover finished third (23.64) and Goldsmith fifth (24.25).

Grover soon rebounded, though, taking the 100 Free for a second consecutive day. This time, she topped Wagner by a narrow margin—clocking in at 50.27—just ahead of the Sun Devil at 51.06. Andrew finished fourth at 52.60.

Grover’s second win of the day came in the 100 Fly, which the Atlanta native also took one day earlier at Arizona. The senior edged teammate Okada by four hundredths of one second (55.24-55.28). Delisle finished a close fifth at 56.96.

Belanger, who swept the diving competitions from the Arizona schools at home last season, nearly did the same thing on the road this year. She once again topped the 1-Meter event with a score of 313.05, ahead of teammate Ciara Monahan (309.38). Sun Devil Mara Aiacoboae earned the first-place points in the 3-Meter with a score of 328.20, as Belanger finished third at 323.10. Monahan finished fifth (264.45).

Next up for the Bruins is the diving-only Trojan Diving Invitational, which will run from Friday, Nov. 10-Sunday, Nov. 12. Swimmers will return to action at the Texas Invitational Wednesday, Nov. 29-Friday, Dec. 1.