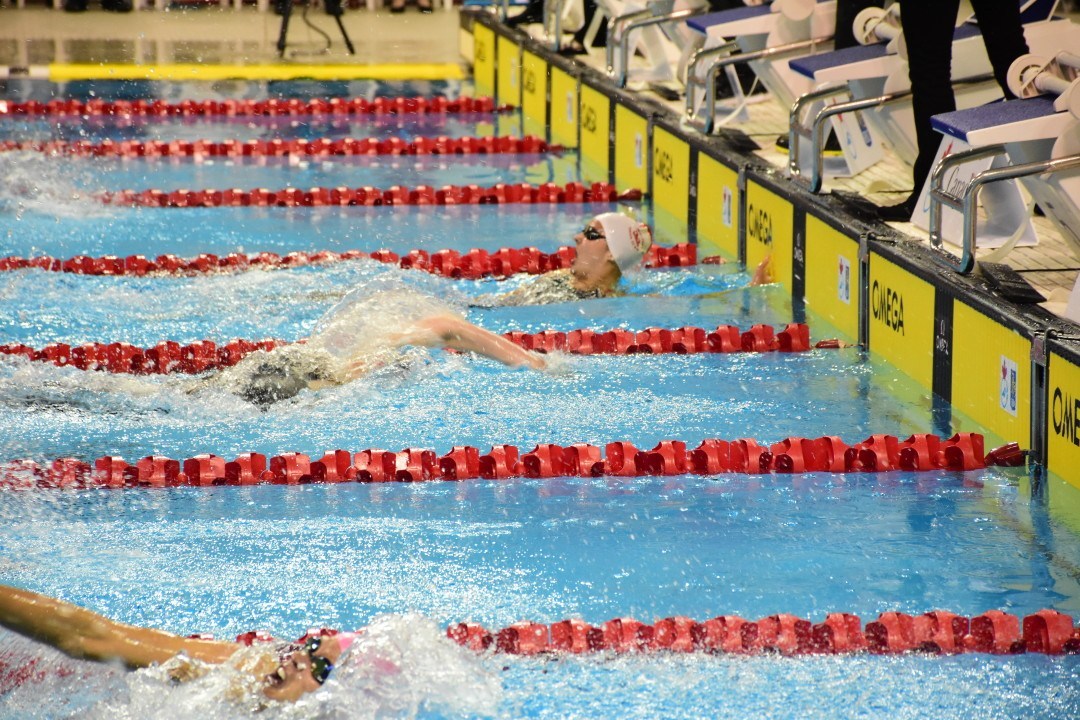 Kylie Masse will look to lower her Canadian Record once again tonight after a blistering 58.42 this morning in the women's 100 back. Archive photo via Jim Snow

Day 1 finals from Victoria are set to begin with many exciting races on the docket. After this morning’s blistering 100 back Canadian Record by Kylie Masse, that event certainly is the most highly anticipated. Masse was just three tenths of a second off the eight-year-old world record of 58.12 clocking 58.42.

The women’s 200 free should also be a great race, with the entire A-final separated by less than two seconds. Katerine Savard leads the field at 1:58.29, and SC World bronze medalist Taylor Ruck comes in 8th after going 2:00.19 this morning. The top three were under the ‘A’ standard in the heats, and assuming the average of the top four finishers at least equals their time from this morning, the top four finishers tonight will all qualify for Budapest.

The women’s 200 breast also brings some intrigue, as #3 seed Kelsey Wog had her DQ overturned this morning, while Sydney Pickrem, who was initially 2nd fastest in prelims, had hers remain intact. Wog will challenge Kierra Smith and Ashley McGregor for a spot in the top-two and will look to crack the ‘A’ standard of 2:25.91.

On the men’s side Jeremy Bagshaw, Markus Thormeyer and Javier Acevedo all have a reasonable shot at hitting the ‘A’ standard in their events. Bagshaw and Thormeyer will shoot for 1:47.73 in the 200 free, while Acevedo will seek to get under 54.06 in the 100 back.

Cascade’s Alexander Katelnikoff broke from the pack early along with the Etobicoke duo of Justin Konik and Jong Hoon Lee, and the three of them battled the entire race. Katelnikoff held the slight advantage over the back half of the race, and held on for the win in 8:16.64. Konik took 2nd in 8:17.37, and Lee was 3rd in 8:18.27.

Four of the top eight finishers, including Katelnikoff and Konik, were born in 2000, showing a great sign for the future of Canadian distance swimming.

Venezuelan Rafael Davila actually posted the fastest time of the day in 7:58.90, but was ineligible to swim in the fastest heat due to his international status.

Sadie Fazekas was ahead from the start, and dominated to the win in 26.90, slightly quicker than her morning swim of 26.93. Marie-lou Lapointe and Mabel Zavaros both took off solid chunks of time from prelims to take 2nd and 3rd respectively.

Matthew Dans of the GO Kingfish defended his top seed tonight winning the A-final in a new personal best of 24.35. Josiah Binnema of Edmonton Keyano moved up a spot for 2nd in 24.50, just getting by Alexandre Perreault who was third.

Oakville’s Gamal Assaad also had a big drop, taking over four tenths off his morning swim to move from 6th to 4th in 24.60.

American Kyle Robrock won the B-final in 24.29 improving his morning swim from a tenth.

Katerine Savard just missed the Canadian Record as five women snuck under the FINA ‘A’ standard in a scintillating 200 free final. Mary-Sophie Harvey had a huge drop to take 2nd in 1:57.81, and Kayla Sanchez and Rebecca Smith (1:58.59) go fast enough to qualify for Budapest in the 800 free relay.

The biggest shock had to be the performance of Taylor Ruck, as she faltered down the stretch and touched 8th in 2:00.63. This is a very surprising result, as Ruck was coming off a great summer in Rio and an even better performance at Short Course Worlds in December.

Markus Thormeyer and Jeremy Bagshaw battled throughout the men’s 200 free, with Thormeyer’s back half ultimately getting the job done for the victory. He missed the ‘A’ standard of 1:47.73 by about six tenths in 1:48.33. Bagshaw won silver, and Thormeyer’s UBC teammate Carson Olafson took bronze.

Peter Brothers of Calgary also got under the 1:50 mark in 1:49.70. The top-four were not fast enough to qualify a relay for Budapest.

Kierra Smith and Ashley McGregor both successfully qualified for the 2017 World Championships in the women’s 200 breast, getting under the standard of 2:25.91. Smith touched for gold in 2:24.36, and McGregor was 2:25.32 for a new personal best. This is McGregor’s first time on the Canadian National Team since 2010.

Island Swimming’s Sarah Darcel had a big swim to take off two and a half seconds from the morning for bronze in 2:27.74, overtaking Kelsey Wog over the final 50 metres. Wog was 3rd at the Olympic Trials in 2:25.4, but isn’t quite on form here and finished 4th in 2:28.75.

Toronto’s Eli Wall had an incredible acceleration over the final 50 metres to pull away from the field and take the victory in a best time of 2:12.26. Wall came home in a blistering 33.77.

Wall’s time is just over a second off of the qualifying standard for the World Championships, standing at 2:11.11.

Ryan Telford also produced a big best time to take second in 2:13.02, as both men outdid incoming top seed James Dergousoff, who added a bit from the morning and settled for 3rd in 2:14.66.

Kylie Masse continued to amaze in the final, re-breaking her national record from the morning in 58.21 and moving up two spots to become the third fastest performer in history. She is now less than a tenth off the world record of 58.12 set by Gemma Spofforth in 2009.

Adding a little more drama to the event was Hilary Caldwell and Dominique Bouchard tying for 2nd in 1:00.25, both getting under the ‘A’ standard. The tie-breaker in this situation is the prelim swim, so Caldwell with the faster morning time earns selection to the team.

Alexia Zevnik and Taylor Ruck also had good swims and tied as well, locking horns for 4th in 1:00.78. Also cracking 1:01 was Ingrid Wilm and Johanna Roas in the B-final.

Javier Acevedo became the first man to punch his ticket to Budapest with a best time of 53.64 in the men’s 100 back, missing the Canadian Record by just one one-hundredth. After just missing the semi-finals at the Olympics last year, Acevedo has had a strong freshman season in the NCAA swimming for Georgia and will be a contender for a spot in finals this summer.

Very good 100 back times for both genders – specially that 58.21 !!!! Dang , thats super fast . She is already a possible medal threat for this summer with such a time in April .

Javi kinda cute. He got a girlfriend???

“The last Canadian woman to hold the world record was Elaine Tanner, who broke the mark twice in a day on July 27, 1967.” –Craig Lord. Can someone please inform Mr. Lord of Annamay Pierse (200 breast world record, 2009)?

“The” not “a” world record. I think he’s talking about the 100 back specifically.

Thanks to her Budapest is getting more and more exciting every day. Who can tell now which event is the less predictable?

Stephanie Horner just won the 1500 free and already has a spot on the World Championships team in the 10K open water event. I know the 1500 is not a qualifying event, but does anyone have an opinion on whether she’ll be allowed to swim the 1500 at worlds, since they have to buy the plane ticket for her anyhow? Or will they choose who’ll swim that event based on how the women’s 800 goes?

So this says Canadian trials, but what are they qualifying for?

what would u train for ? LOL

They said that in the event of a tie, the prelims time would be used as the tie breaker

You have it wrong, Alex. World record is 58.21by Kylie Masse. And the best time with the assistance of high-tech suit is 58.12 by Gemma Spofforth.

Gemma broke that record in an LZR.

dont get ahead of yourself just YET ! LOL