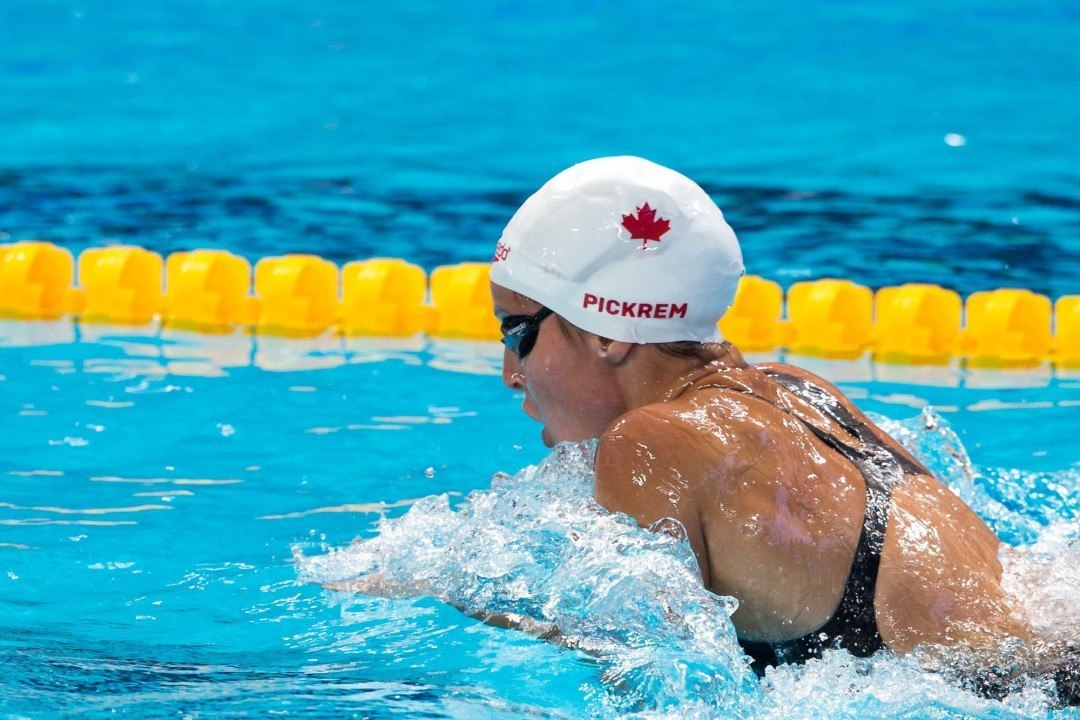 Sydney Pickrem comes in as the top seed in the women's 200 IM, an event in which she holds the Canadian Record.

Canadian swimmers will have their last chance to earn a spot on this summer’s World Championship team tonight at the eighth and final session of the 2017 Trials.

Starting us off tonight will be the women’s 800 free, where top seed Olivia Anderson has a great chance to add her name to the World’s roster coming in with a best time nearly six seconds under the qualifying standard at 8:32.84. Mackenzie Padington, who won the 400 free yesterday and qualified for the team, will take lane 6 in the heat.

After the early heats, Marit Anderson holds the top time among Canadians at 8:55.98, while Molly Gowans (GBR) was fastest overall at 8:51.59.

In the men’s race, Mack Darragh, Osvald Nitski and Nicolaas Dekker have set themselves up for a tight battle after all clocking 2:00 this morning. The standard of 1:57.28 will be tough to attain, though both Darragh and Dekker were both 1:58 at the Olympic Trials last year.

The women’s 50 free looks to come down to High Performance Centre Ontario teammates Michelle Toro, Chantal van Landeghem and Sandrine Mainville, who are the top three seeds. Toro leads the way after cracking 25 this morning, and her and van Landeghem will look to qualify for an individual swim after making it in the 400 free relay on day 2. The qualifying standard is 25.18.

The men’s 50 shapes up to be Alex Loginov versus Yuri Kisil, the only two men who broke 23 seconds this morning. Loginov was fastest at 22.55, but Kisil has a faster best at 22.23. Both will need to be on to attain the 22.47 qualifying standard.

The women’s 200 IM will be a fantastic race, with many in the mix for a spot in the top two. Sydney Pickrem and Erika Seltenreich-Hodgson were both 2:12 this morning, but Kylie Masse has been on fire all meet and Sarah Darcel has looked dangerous. This will be the last chance for both Darcel and Seltenreich-Hodgson to qualify for Budapest.

Mack Darragh will have a tough double as he’ll take lane 4 in the 200 IM final about 40 minutes after his 200 fly. He’s the top seed at 2:02.12, but should get a challenge from backstroke specialists Rob Hill and Javier Acevedo who will surround him in lanes 3 and 5. 400 IM runner-up Luke Reilly winds up in lane 1 after a satisfactory morning swim, but could provide some outside smoke and push for a spot on the team.

2012 Olympic bronze medalist in the Open Water event Richard Weinberger is also slated to swim in the heat in lane 6, and 800 free winner from day 1 Alexander Katelnikoff will take lane 7.

After the early heats Alexander Pratt is first among Canadians in 15:43.69, while Venezuelan Rafael Davila was fastest overall at 15:22.23.

After a massive swim in the 400 free last night, Mackenzie Padington did it again tonight in the 800, chopping some 20 seconds off her best time to win in a time of 8:31.68. That is the 10th fastest time in the world this year, and was nearly seven seconds under the qualifying standard.

Top seed coming in Olivia Anderson was a bit off her season best, but gutted it out over the final 50 to qualify for the team as well in 8:37.12.

Calgary’s Danica Ludlow takes bronze in 8:49.46, and Caitlin Hodge of Laval was 4th in 8:49.46. Marit Anderson‘s time from the early heats stands up as the 6th best time overall.

Katerine Savard took the race over on the third 50, but tied up over the last length to fall short of the qualifying time but still come away with the win in 2:12.47.

Youngsters Victoria Kwan and Mabel Zavaros both gained on Savard on the last 50 and battled to the wall, with Kwan getting the touch by one one-hundredth in 2:13.58 of silver, with Zavaros in for bronze.

Oakville’s Mack Darragh took a run at the tough qualifying standard, ultimately falling just short by putting up a new best time of 1:57.94 to take the win. Nicolaas Dekker was the only other man under two minutes in 1:59.80 for silver.

University rivals Montana Champagne and Osvald Nitski were locked in a tight battle for bronze, with Champagne ultimately getting the touch by one one-hundredth, 2:00.45 to 2:00.46.

Michelle Toro matched her prelim swim to take gold in a time of 24.95 and earn an individual event in Budapest. Sandrine Mainville slipped under the ‘A’ standard as well in 25.11 to add this event to her schedule that already includes the 100 free.

A bit of a disappointment for national record holder Chantal van Landeghem, who was 5th at the World Championships two years and 10th in Rio, as she finished 3rd in 25.21 and misses the team. The 400 free relay will be her lone event in Budapest.

Alex Loginov became the first male to qualify for the team since day 2, clocking a new best time of 22.24 to crush the ‘A’ standard and qualify for his first World Championship team.

Yuri Kisil was much better than this morning, ultimately missing the qualifying standard by less than a tenth in 22.55. He’ll still be in Budapest competing in the 100 freestyle.

Spencer Bougie of Pointe Claire took off nearly six tenths from the morning to move up from 7th to 3rd in 22.75, just ahead of Markus Thormeyer who also broke 23 in 22.93 for 4th.

Sydney Pickrem threw down a new Canadian Record and the #1 time in the world this year in 2:09.56, adding the event to her World’s schedule.

Erika Seltenreich-Hodgson had a great swim as well, improving on her best time from 2014 in 2:10.97 to qualify for the team and put up the 9th best time in the world.

Sarah Darcel continues to impress here finishing 3rd in 2:12.51, and Kylie Masse finishes off a spectacular meet with a solid swim for 4th in 2:13.18, making that four women under the ‘A’ standard.

Darragh earned his second national title and second personal best of the night, putting up a time of 2:01.32 to win the 200 IM. Once again Darragh fell short of the qualifying standard, this time by a little over a second.

Rob Hill and Luke Reilly both took off over two seconds from prelims to take 2nd and 3rd, while early leader Javier Acevedo fell to 4th in 2:03.92.

Eric Hedlin blew away the field tonight in a time of 15:08.35, his fastest time since he went 15:03 back in 2013. Hedlin also got under the World qualifying standard by over four seconds, but announced after the race he won’t compete in the event at the World Championships as he is already committed to racing the 10 KM Open Water event.

Gotta say, I love how confident the Canadian women’s team is becoming. In the past, in post-race interviews, I didn’t often hear Canadian swimmers stating lofty goals, dreaming big, and projecting these ambitions to the world (with the exception of Ryan Cochrane, who continually medaled internationally). I’m generalizing here, but Canadians need to move away from the overly polite mindset of, “I just want to see what’s possible” to “I want to challenge for the top spot in this event.” And no, having this sense of confidence doesn’t mean you’ll automatically become a jerk – you can still be kind, but confident – look at Katie Ledecky for example. Penny, Kylie, etc all seem to have a genuine belief in… Read more »

Reminds me a lot of a college team atmosphere. They not only show confidence in themselves but also in their fellow Canadian teammates, which is excellent. They deserve a bit of confidence as well following Rio. Looking forward to see how they perform!

Well said, Swimmer1. From having only 6 swimmers on the Athens Olympic team in 2004, the women’s program did a good job of adding depth. For instance, by London 2012, the Canadian women had 2 entrants in 8 of the individual events (i.e., 2 FINA A standard swims) and qualified in all three relays (2 of which made finals). No medals … but a decent pool (ahem) of world level swimmers. This base built over the Rio quadrennial – Commonwealth Games gold medals even (!) and – as a further example – Olympic medalists like Masse and Oleksiak weren’t fast enough to make the Canadian national teams in 2015. In 2016, Oleksiak had to beat a pair of Kazan Worlds… Read more »

I’m excited for it, Ruck and Oleksiak back to the stage where they began their breakout careers