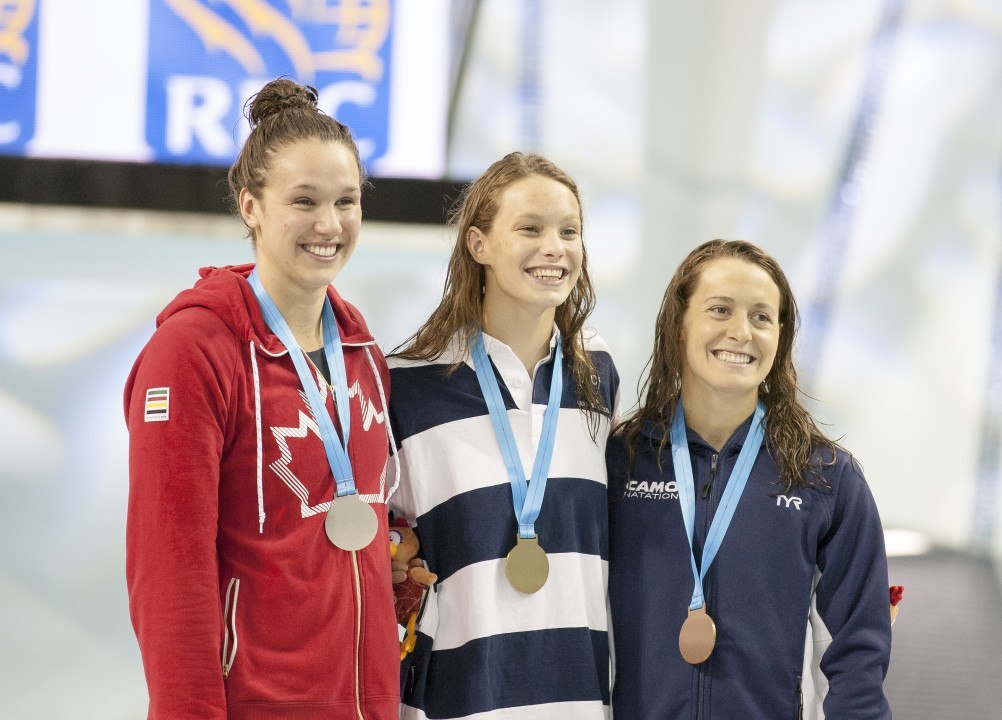 Take a look at an in-depth preview of the 2017 Canadian Swimming Trials. Archive photo via Chris Tanouye

Heading into the upcoming Canadian World Championship Trials there is a stark contrast between the state of the men’s team and the women’s team.

The women, coming off a six medal performance at the 2016 Olympic Games (including two in relays), appear incredibly stacked. They have a total of 42 swims seeded under the ‘A’ qualifying standard across 13 Olympic events. The 200 fly is the only event where they have no one seeded under the standard, while they are deepest in the 100 free (8), 200 back (6) and 200 free (5). The top two in each Olympic event will automatically qualify if they go under the ‘A’ standard in the final. They are seeded to do that in every event other than the 200 fly and 800 free.

In terms of relays, the top four finishers in the 100 and 200 free need their aggregate add-up time, minus 1.5 seconds, to be under the relay qualification standard. Even without the 1.5 second cushion, the women are seeded to be well under both standards and should have no trouble qualifying their freestyle relays.

Here’s a look at three of the most exciting races of the Championships on the women’s side:

With eight women seeded under the ‘A’ standard, this race shapes up to be incredibly competitive. Leading the field is 2016 Olympic gold medalist Penny Oleksiak, seeded first by over a second with her 52.70 from Rio. Sandrine Mainville and Chantal van Landeghem, who both swam on the bronze medal winning 400 free relay in Rio along with Oleksiak, are also seeded under 54 at 53.86 and 53.89 respectively. The fourth member of that team was Taylor Ruck, who is only seeded 8th at 54.83 but should challenge for a spot in the top two. She split 53.04 in Rio, and is coming off a very successful SC World Championships in December.

Michelle Toro swam on the prelim relay in Rio and is seeded 4th in 54.45, followed by Alexia Zevnik (54.53), Katerine Savard (54.60) and Jacqueline Keire (54.78) who round out the eight seeded under the ‘A’ standard of 54.90. Youngsters Rebecca Smith and Kayla Sanchez are on the rise and could surprise some of the more experienced swimmers. They’re seeded 9th and 10th. Whoever finishes in the top-4 will bring a very competitive relay to Budapest this summer.

The 200 back is another stacked event on the women’s side. As previously mentioned, six are seeded under the ‘A’ standard of 2:11.53. However, the event has been dominated by two women recently in national record holder Hilary Caldwell and Dominique Bouchard. Caldwell won bronze in Rio, while Bouchard just missed the final in 9th. The battle between the two for the win will be exciting, though there are a few who could potentially upset one for a spot on the team.

100 back Olympic bronze medalist Kylie Masse occupies the third seed at 2:08.79, a time that would’ve been good for 6th in Rio had she qualified. Masse was 4th at the Olympic Trials in this event, but dropped the 2:08 at an Olympic tuneup meet in Italy in June. She has seen vast improvement in her short course 200 this year, just missing Caldwell’s national record in 2:02.80, and will challenge for an individual spot in this race.

Lurking in the weeds are Olympic Trials 3rd place finisher Kennedy Goss and this years NCAA runner-up Alexia Zevnik. Also seeded under the ‘A’ standard is Etobicoke’s Meryn McCann who just finished up her freshman year at Georgia, and IM standouts Erika Seltenreich-Hodgson and Sydney Pickrem are also entered. Taylor Ruck is also in the mix and holds the 4th fastest PB of anyone in the field at 2:09.49 from the 2015 Junior Worlds.

The 200 IM is anyone’s race, with many different women throwing their hat in the ring. Despite the absence of 400 IM World medalist Emily Overholt, the field is still strong with four seeded under the ‘A’ standard, plus national record holder Sydney Pickrem entered 0.01 off. Her best of 2:10.08 earned her 6th at the 2015 Worlds in Kazan, and she’ll definitely be the favorite.

Seeded ahead of Pickrem are rising stars Mary-Sophie Harvey and Sarah Darcel, and university stars Kylie Masse and Erika Seltenreich-Hodgson. The race will be tight to get in the top-2 and to get under the standard of 2:13.41.

The men’s side is a completely different story. After recent improvements in Kazan and Rio, including getting their 400 free relay in the final both times, they’ll be in tough with many big names missing.

Their top two individual performers in Rio, Ryan Cochrane (retired) and Santo Condorelli (not entered) leave a large hole on the team that will be difficult to fill. Unlike the women’s 42, the men have just five entries seeded under the ‘A’ standard. They’ll also have a tough time sending the top-4 100 freestylers for the 400 free relay this year with both Condorelli and Evan van Moerkerke (also retired) not competing. An average of 48.9 is required by the top-4 to qualify them, and only Yuri Kisil is seeded under that mark.

After narrowly missing the Olympic team, Richard Funk will be looking for a redemption swim in the 100 breast. He’s seeded just three tenths shy of the ‘A’ standard.

Here’s a look at the top three races on the men’s side:

Even with Condorelli out, the 100 free is probably the top line event of the meet for the men. Kisil placed 10th in Rio, and could challenge the 48-second barrier this summer. Thormeyer is also poised for a sub-49 swim after his performance in Rio, and both looked great at the U Sport Championships in February.

After a disappointing Olympic Trials Karl Krug is back and will likely be in the mix for a top finish. Mirando Jarry cracked the 50-second barrier at Olympic Trials, and you also have Javier Acevedo, who was sub-50 at the 2015 Trials. Acevedo has done a lot of sprint free this year swimming for Georgia and will challenge for a top-3 spot.

After both going 1:44-low at the U Sport Championships (25m) in February, Kisil and Thormyer should battle it out once again in Victoria. The two of them, along with Island Swimming’s Jeremy Bagshaw, are all seeded in the 1:48s and will have a very tight battle. All three have a reasonable shot at achieving the ‘A’ standard of 1:47.73. In order to send the top four finishers for the relay they would need four men to average 1:47.66, which likely isn’t in the cards.

Seeded at the top of this race are Acevedo and Thormeyer, who performed very well in the 200 back at their respective university championship meets.

Most countries have a gender imbalance, but Canada is absolutely ridiculous. The women have incredible potential – The men look diabolical.

AUS has been little different for the past 10 years, The presence of 2-3 possible world leaders has semi wallpapered over the gaping chasms elsewhere.

What is happening now, or what is likely to occur over the next 12-18 months is that CAN will supplant AUS as the primary relay competition to the US on the women’s side

I agree RE the relays – The Canadian 4×200 particularly has frightening potential, even with Britt retiring. They’ll need to find a breaststroker to be real threats it the medley though. Interestingly, Australia has relied on their women to dominate in Swimming at Commies in recent years, the rise of the Canadian women could really give Australia a battering as I see the Aussie men really struggling for medals on the Gold Coast, aside from a few big names.

The issue, as I’ve said before, is whether both AUS & CAN, let alone the Home Nations, prioritise Toytowns over Pan Pacs.

AUS DO have a significant number of swimmers, including some major names, who may well be deciding to collect their superannuation after Toytowns so they can probably get away with sending them to TT whilst those with the longer term focus prioritise PP. I’m thinking names like Magnussen, Seebohm as the most likely but would not surprise to see a few other even bigger names.

AUS W4X200 won’t even be at the party. With Barratt’s retirement, Cook on sabbatical and potentially a question mark longer term & Elmslie no longer swimming 200s; its McKeon then 1.58s. Would… Read more »

Canada is reaping the benefits of focusing solely on developing the women with female only grants and scholarships at the expense of the men – the red pill!!

Compared to 3 or 4 years ago it’s day and light about the Canadian women’s level and depth in the 100 free and 200 free.
It’s insane right now with so many young talents.
Oleksiak/Ruck/Sanchez/Smith is a crazy good young team for the future, at least until 2024, and in both freestyle relays.
And it could start next summer with a gold in the 4X200 free relay.

Zimbabwe relay looking strong too, definitely watch out for them this summer

With departure of Allison Schmitt and Maya DiRado American 800 relay lost indeed some strength. But with the Mallory Comerford on the horizon and Leah Smith being improving American relay is still safe having Katie Ledecky’s split under 1:54. Three would be three if not four 1:55 swimmers needed to beat this team. Canadian team doesn’t fit this requirement yet. The talks about potentials of Canadian 4×200 relay are based mostly on the results of SC performances. Let’s wait a few days to see how it transfers into LCM times.

Well I thought they showed their potential when they got third at the Olympics in the 4×200 despite having a nearly 1:58 lead off and only one person below 1:56 so.

Bobo was talking about gold medals this summer. That can happen to be hard to achieve. The third place won’t be an issue, as you noticed.

For me, the 200m free for women is the most intriguing event on the Trials schedule. I may or may not have made note of the top 4 times from the USA 2016 Olympic Trials in this event for ease-of-comparison purposes.