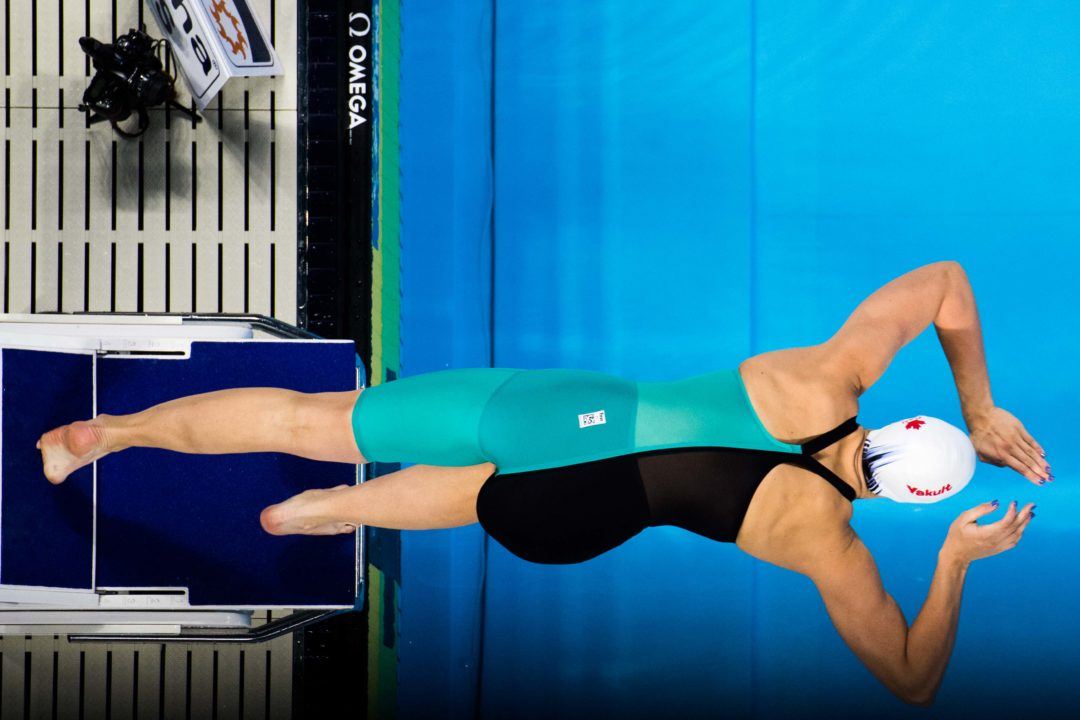 Plenty of spots on the World Championship are up for grabs again tonight, with three selection and four total events on the docket for day 3 finals from Victoria.

Starting us off will be the women’s 400 free, which is now wide open after a no-show from top seed Mary-Sophie Harvey this morning in the heats. Both Mackenzie Padington and Kennedy Goss are within striking distance of the ‘A’ qualifying standard of 4:10.57.

Jeremy Bagshaw, Peter Brothers and Colin Gilbert were all within 1.5 seconds of each other this morning and will battle it out in the men’s 400. The fastest man this morning, Rafael Davila, will swim in the B-final due to his Venezuelan citizenship.

Penny Oleksiak and Katerine Savard are set to duel tonight in the women’s 100 fly, with rising star Rebecca Smith breathing down their necks. Savard was under the qualifying standard this morning in 57.96, and Oleksiak and Smith were both less than two tenths off. All three have already made the team.

The men’s event will be tight with Alexandre Perreault, Josiah Binnema and Mack Darragh all within half a second of each other this morning.

The women’s 200 back could very well be the race of the night, with world #1 Hilary Caldwell leading the way after a quick 2:08.48 showing this morning. Dominique Bouchard comes in as the second seed and will have her last shot at making the team, while Kylie Masse will push for a spot after winning the 50 back last night and scaring the 100 back world record on day 1.

After a no-show from Markus Thormeyer, the men’s 200 back shapes to be a battle between 50 winner Tim Zeng, 100 winner Javier Acevedo and Calgary’s Rob Hill. The three of them were within eight tenths of each other this morning, led by Zeng in 2:01.98.

Wrapping us up will be the 50 breaststroke, which won’t be used as a selection event for the World Championships. Both Rachel Nicol and Richard Funk will look to follow up their wins in the 100m event last night with another tonight. Funk is within range of the Canadian Record of 27.45.

Mackenzie Padington got out fast and held on down the stretch, earning a spot on the World Championship team in a time of 4:09.04, well below the 4:10.57 standard. Kennedy Goss had a strong back half but was unable to run down Padington, touching in 4:10.80 to just miss a spot on the team.

Danica Ludlow dropped nearly four seconds from the morning to take bronze in 4:11.39.

Venezuela’s Rafael Davila had a great swim in the B-final putting up a time of 3:51.50.

Penny Oleksiak pulled away from top seed Katerine Savard over the final 50m with a swift 30.16 back-half to win the race in a time of 57.35. That qualifies her for the World Championships in this event, adding it to the 100 free she qualified in yesterday.

Savard was slightly slower than this morning, but it didn’t matter as she got under the standard as well in a time over 58.27 to add the event to her schedule that already includes the 200 free from day one. Savard revealed in the post-race interview that she ripped her suit during the race.

Continuing to impress here is Rebecca Smith, who posted another best time in 58.52 for bronze.

Edmonton Keyano’s Josiah Binnema took off nearly a full second from his best time from this morning to win in a time of 52.90, winning his first ever national title. Though he didn’t quite reach the Worlds standard, it was a very impressive swim from Binnema.

Last year’s Olympic Trials winner Mack Darragh had a solid showing for 2nd in 53.65, getting by tonight’s top seed Alexandre Perreault who takes bronze in 53.71.

The women threw down in the 200 backstroke tonight, as Olympic bronze medalist Hilary Caldwell and Olympic 100 back bronze medalist Kylie Masse battled it out for the win. Caldwell was even at the 100 with Dominique Bouchard for the lead at 1:02.27, while Masse sat back in 3rd at 1:02.73. After unloading a 31.89 3rd 50, Masse pulled within two one-hundredths of Caldwell before overtaking her for the win in a time of 2:07.23. Caldwell was just behind for 2nd in 2:07.29. They both add this event to their World Championship schedule which already includes the 100 back.

Masse overtakes Caldwell for the #1 time in the world for the season, while Caldwell takes nearly 1.2 off her season best though dropping one spot. Both swims are also faster than Caldwell went for bronze in Rio (2:07.54).

Bouchard, who was 9th at the Olympic Games last year, faltered over the back half and touched 4th in 2:11.24. The University of Manitoba’s Mackenzie Glover overtook her over the last 50 to take bronze in 2:11.17.

Croatia’s Anton Loncar was the fastest man in the pool tonight, posting a best time of 2:00.00, just missing that elusive two minute barrier.

Rachel Nicol claimed her second national title of the meet with a 50 breast win in a time of 31.19, just getting by 16-year-old Faith Knelson who was had a great meet here. Knelson touched in 31.25 for silver, taking three quarters of a second off her best time coming into the meet.

Richard Funk was a few one-hundredths faster than prelims to win the 50 breast easily in a time of 27.73, giving him his second national title of the meet. Funk wasn’t too happy with his time during his post-race interview, and will likely get a crack at the Canadian Record at the World Championships this summer if he swims this event.

Eli Wall earned his third top-2 finish in the breaststroke events with a silver medal performance in 28.39. Wall won the 200 on Thursday and was runner-up to Funk in the 100 yesterday.

15-year-old Gabe Mastromatteo had a big drop, over seven tenths from prelims, to move up from t-7th to 3rd tonight in a time of 28.45. James Guest, James Dergousoff and Jonathan Naisby all broke 29 seconds as well in 4th, 5th and 6th.

Gabe Mastromatteo is only 14. He ages up in the summer.

Kylie Masse is killing it this weekend. Might be a contendor for the 200m im tomorrow too.

Whatever happened to Amanda Reason?

Not sure what the reason was.

In Los Angeles California at USC studying economics. He probably is playing catch up with his school work. Some students missed a week of school for NCAAs.

So he won’t be competing at the world champs this summer because he has missed trials?

He won’t be competing in Worlds

I think Canada has a selection priority where they could still pick him, even if he hasn’t swam at trials. Sort of like what they did with Ruck last summer.

I don’t believe so. Franklin was 1:00.5 on the way out in her world record swim.

Didn’t think so. The only time is probably when they were going for a 100 time.

i think she had lots in reserve. I think it will be Caldwell 1, and Masse a very close 2 both making A standard