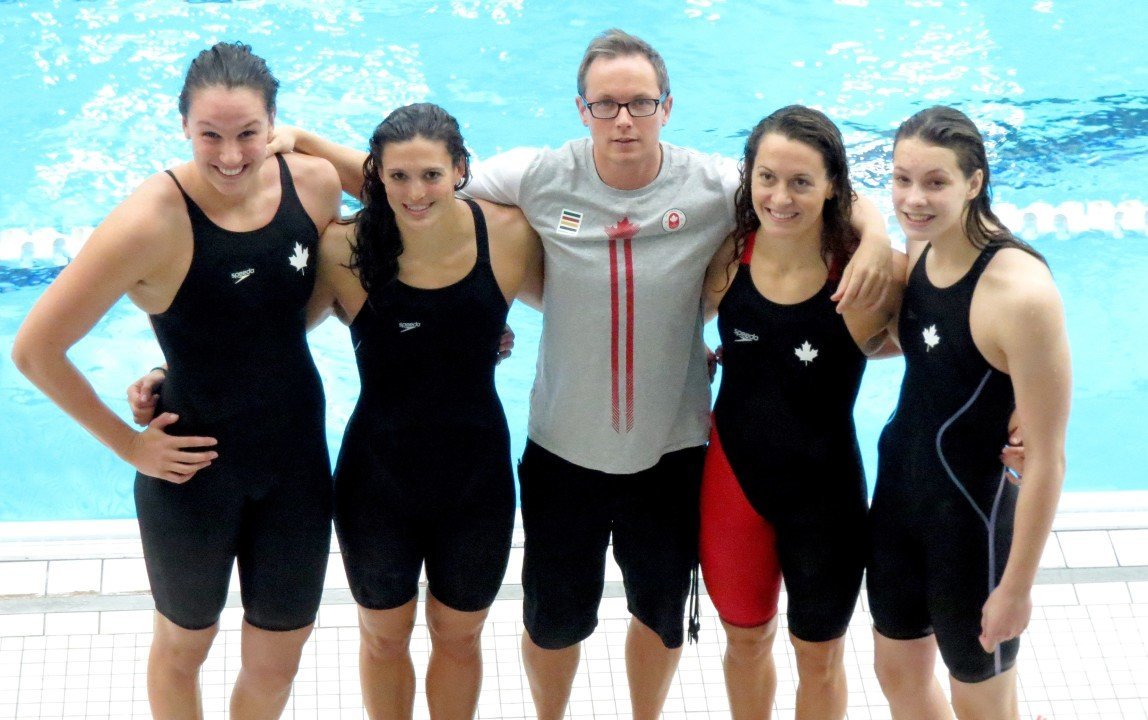 Canada announced a roster of 26 pool and 6 open water swimmers for the upcoming 2017 World Championships in Budapest. Archive photo via Emsie Williams

Prior to this, Javier Acevedo and Kylie Masse were given ‘Swim of the Meet’ honors for their efforts in the 100m backstroke. Acevedo won the men’s event in a best time of 53.64, missing the Canadian Record by 0.01. Masse broke her Canadian Record and had the 3rd fastest performance in history, coming in at 58.21.

Heading into tonight, there were 19 swimmers qualified for the team. Three more new swimmers made the cut tonight, not including Eric Hedlin who made the 1500 cut but won’t compete in the pool as he’ll focus on the Open Water event.

Olivia Anderson made it in the 800 free, Alex Loginov in the 50 free and Erika Seltenreich-Hodgson made it in the 200 IM. Along with them, Mackenzie Padington, Michelle Toro, Sandrine Mainville and Sydney Pickrem all added events to their schedules in Budapest.

Here’s a look at the full pool swimming roster:

Along with the automatic qualifiers, Swimming Canada added four other men to the team. Markus Thormeyer, Carson Olafson, Jeremy Bagshaw and Josiah Binnema were named to the team for relay purposes this summer.

Thormeyer won the 200 free and was the runner-up in the 100, while Olafson was 3rd in both those races. Those two, along with Yuri Kisil and Javier Acevedo, will likely make up Canada’s 400 free relay in Budapest.

Bagshaw was the runner-up in the 200 free, and will most likely combine with Thormeyer, Olafson and Kisil in the 800 free relay.

The win in the 100 fly from Binnema earns him a spot on the 400 medley relay along with Acevedo, Yuri Kisil, and Richard Funk, who all got under the qualifying standard in their respecitve 100m races.

The coaching staff for the World Championships will include:

Swimming Canada also named six members to compete in the 10 KM Open Water event in Budapest. They are as follows:

Hedlin, Weinberger and Horner all competed in the pool here this weekend, with both Hedlin and Horner earning wins in the 1500 free. The swimmers were named to the team based on their performances last year in the Open Water World Cup events and the Olympics.

Check out the official roster here.

Markus Thormeyer, Carson Olafson, Jeremy Bagshaw and Josiah Binnema were named to the team for relay purposes this summer. Will these swimmers be allowed to swim individual events at Worlds if no one is entered in the event? For example will Josiah Binnema be swimming the 100 fly since he has the Fina B cut or is he designated as a relay only swimmer?

I’d say there’s a good chance he get’s to do the 100 fly, but it ultimately is up to Swimming Canada. Last year Jason Block was added to the Olympic team for the breast in the medley relay and got to swim it individually in Rio despite missing the ‘A’ standard at Trials, though he was only 0.02 off. Mack Darragh was in the same boat though he didn’t do the 100 fly individually, but he was 1.01 off the ‘A’ standard. Binnema is somewhere in between, so we’ll see. On the official roster there is no ‘Relay only’ designation for those four.

Despite his DQ at Trials, Santo Conderelli swam the individual 100m fly in Rio. This left Darragh ineligible to swim the 100m fly (as he didn’t have a FINA A swim) and left him only swimming the fly leg of the medley relay.