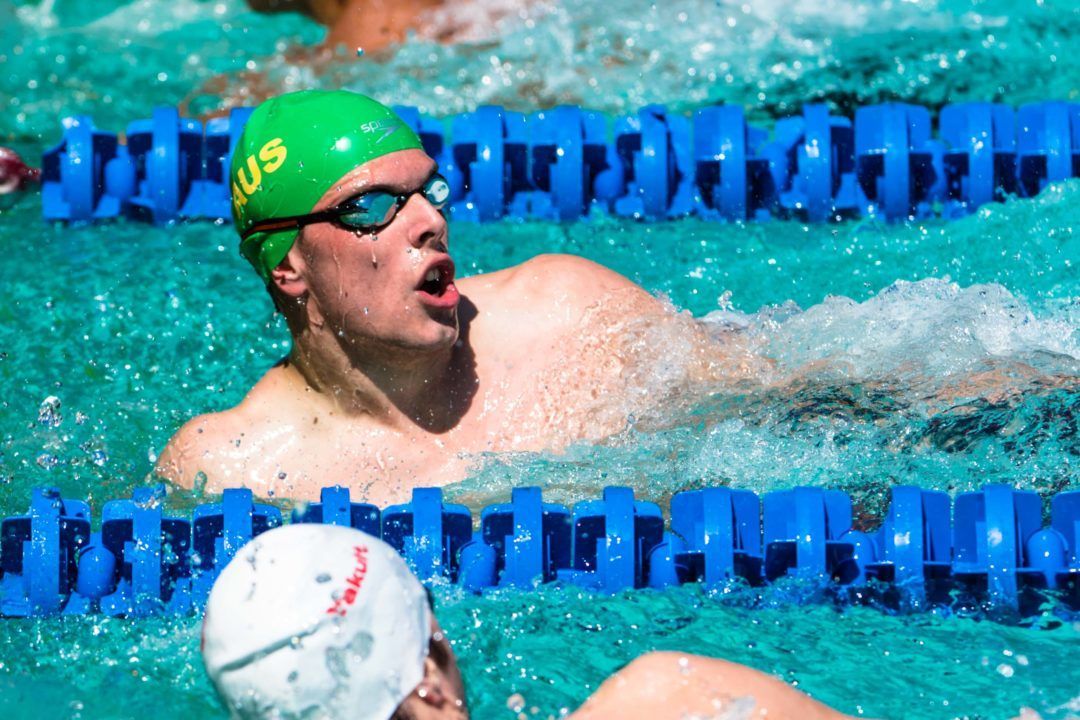 21-year-old Nunawading swimmer Jessica Hansen marked her territory on the women’s 100m breaststroke, taking the top seed in a time of 1:07.74. That outing sits just outside Hansen’s own personal top 10 performances and is right on par with where she was at last month at the NSW Championships when she clocked 1:07.41 to claim silver.

But Olympians Taylor McKeown and Georgia Bohl are also in the hunt, seeded 2nd and 3rd, respectively out of this morning’s finals. Bohl says she is just ‘focusing on the process’ at this meet, taking one race at a time. As opposed to previous editions of this meet, there is no sem-final tier of racing, so competitors go directly from prelims to finals, so she’ll have to think quickly.

Even though both McKeown and Bohl dipped under the 1:07 threshold at last year’s Aussie Olympic Trials, neither could replicate that caliber of performance once at the Olympics. McKeown made it to semi-finals in Rio in this event, winding up 11th in a time of 1:07.1 while Bohl was shut out early finishing 24th in 1:07.96. As such, any competitor in this overall sluggish (when compared internationally) Brisbane prelim will need to drop major time to achieve the stiff 1:07.11 Aussie-mandated qualifying time for Budapest.

The fact that the Brisbane crowd was treated to 5 sub-1:48-second 200m freestyle swims in just the prelims speaks the caliber of men’s talent in this event. And, it’s not just the veterans like Daniel Smith and David McKeon who are getting the job done.

Smith did nab the top seed in a super swift 1:47.57, a mark which falls within his own personal top 10 performances, to set him up nicely for tonight’s final. But he’s hunted by youngsters Clyde Lewis (19) and Jack Cartwright (18), who touched in times of 1:47.84 and 1:47.98 to claim the 3rd and 5th seeds, respectively. Lewis already scored a bronze in the 200m backstroke in a huge PB of 1:58.83, so the St. Peters Western swimmer is already on a hot streak.

Olympians Kyle Chalmers and Cameron McEvoy are also in the mix, finishing just .06 apart in the final heat that came down to the touch. With their experience and predatory drive it’s completely possible one or both wind up on the podium after tonight’s final. Plus, Mack Horton, yesterday’s 400m freestyle gold medal winner, is lurking in 8th.

Having already qualified for the World Championships squad with her silver medal-winning 100m freestyle performance last night, Emma McKeon has a little of the pressure off her shoulders during today’s 100m butterfly racing. She nabbed the top seed in a speedy 58.15, already just .10 off of the Aussie-mandated qualifying time of 58.05.

Right behind is Western Australian representative Brianna Throssell, an Olympic finalist in the 200m butterfly in Rio. Throssell entered the meet with a 58.04 and finished 4th at this meet last year in 58.07, so the 21-year-old will need to clock a near lifetime best to make the cut and journey to Hungary.

One swimmer who won’t be joining the 8 ladies in the final is Olympic gold medalist Brittany Elmslie, the Brisbane Grammar athlete who entered this meet as the 3rd seeded swimmer. Entering Brisbane with a seed time of 58.61, Elmslie fell far short to clock a 1:00.69 and fall to 11th place and out of contention. Elmslie also looked a little flat in the 100m freestyle last night as well, still clocking a 54.38 for 6th, but off of the 53-point that is more typical of the 22-year-old at major meets.

Interesting to note the age range of the finalists, with Gemma Cooney and Laura Taylor both at just 17 on the low end, while Commercial swimmer Sara Saal is 30 years of age.

With the men’s 200m breaststroke qualifying time sitting at a mega swift 2:09.64, a time that would rank as the 3rd fastest performance in Australian swimming history, Matthew Wilson appears to be the only likely candidate at this point to come within striking distance. He enters the meet as the only sub-2:12 second time, owning a lifetime best of 2:09.65 from the Vic Open this past January.

18-year-old Breakers breaststroker George Harley is certainly doing his best to give himself a shot, dropping 1.33 off of his previous personal best. Harley has never been faster than 2:13.27 but already notched a 2nd seeded swim of 2:11.94 to at least pace off of Wilson come tonight’s final to try to lower his own PB even further.

With an average age of 19 for tonight’s finalists, the silver lining in non-qualifiers is the prospect of up-and-coming athletes hopefully moving Aussie breaststroke in the right direction.

Biding their time, the women’s 400m IM prelim field saw the top 8 qualifiers saving their energy and clocking conservative marks on the whole. 26-year-old Blair Evans topped the morning heats, of which there were just 2, with her time of 4:43.67, just over 5 seconds off of the QT. Meg Bailey was next in 4:48.16, while Keryn McMaster holding the 3rd seed in 4:48.17.

McMaster was Australia’s highest finisher in the event in Rio, winding up tied for 10th in 4:37.33. As the Trinity Grammar swimmer has been under the Aussie qualifying time, look for her to step up and redeem her Rio final miss with a World Championships roster stop.

Also keep Chelsea Gubecka and Kiah Melverton in your sights. Melverton already earned bronze last night in the women’s 800m freestyle, while Gubecka is the Aussie 5k open water national champion. Each dropped over 4 seconds off of their entry times to make it into tonight’s final.

The key players from yesterday’s 100m butterfly line-up were in the mix in the 50m distance today, led by 23-year-old Christopher Raven‘s time of 23.95. He represented the only sub-24 second swimmer of the morning, as Brayden McCarthy checked in with a 24.07 to position in a lane next door in tonight’s final.

With non-Olympic events not available for individual qualification, an Aussie already on the roster would swim the event in Budapest. However, with last night’s 100m butterfly winner David Morgan falling short of the stiff QT, we’ll keep our eye on who would potentially race this event at the World Championships.

To say Emily Seebohm is the best-performing Aussie female ever in the 100m backstroke is an understatement, as the Brisbane Grammar star holds all of her nation’s top 10 performances of all-time. Even though she’s still only 24 years of age, Seebohm has won this event at 9 of the last 10 national championships, so it’s only fitting she set herself apart this morning with the only time under the minute threshold. Although individually medal-less in Rio, Seebohm is the reigning world champion in both the 100m and 200m backstroke events and has entered 2017 with a fresh mind after having learned what she calls a ‘hard lesson’ from Rio.

Youngsters Minna Atherton and Kaylee McKeown are anxious to give chase to Seebohm in tonight’s finals, just as they’ve been attacking her Australian age group records. Atherton overtook the age group for 15-year-olds with her 59.37 and is well on her way to overtaking Seebohm’s record for 16-year-olds that sits at 59.33. Atherton has been within .01 of that mark, so she’ll certainly be in the hunt tonight.

McKeown, younger sister to breaststroke finalist Taylor McKeown, is also keen on improving, steadily dropping time with every swim. The USC Spartan athlete has never dropped beneath a minute, but paired up with Seebohm and her Olympic teammate Madison Wilsonwho qualified 3rd, the stage may be set.

What’s up with breaststroke in Australia? Stunned by the lack of depth, 1.11 made finals? Seems so strange compared to depth in freestyle, backstroke etc.

It always seems to cycle. Mens Breaststroke is only just starting to develop now that Rickard and Sprenger have left. I suspect that the Mens 100 BRST at Tokyo Trials will be pretty interesting in Australia.

I found the women’s 100BR more concerning, to be honest. 1.11 is really pretty poor, when you look around the globe. You’d see girls going 1.11 regularly at HS/zonal meets in the states or Japan, the much maligned French female breaststrokers made it 1.10 finals in 2016, in Britain in the last year we’ve had 40 women under the time it took to get top 8 in Australia. Depth behind the big names is a pretty steep drop, which I guess is to be expected in a country of only 20 million or so people, but still a surprise to me. More positive, the men’s 200 free looks very, very healthy and there’s some talent in the men’s 200BR sneaking… Read more »

Liesel ‘s book turned them off .

I agree, the women atm are awful. But just a year or two ago the men were just as bad if not worse. Things will get better.

Jones’s longevity, along with the likes of Hanson, White & Edmistone in the 00s probably scared off a generation or two. McKeown Sr is essentially a 200 swimmer who struggles to get it together over 100; correspondingly Pickett is a 50 gun who struggles to go 100. Bohl has a break-out domestic season 2015-2016 but imploded completely in Rio; the issue is whether she can regroup. AUS M BRS struggled for some years until 2nd half of 00s when Rickard & Sprenger finally broke through. Their longevity shut out and probably scared off a couple of generations. As for M200FR, there certainly seems a ruck of 1.47 men but just how many can/will step up to being reliable 1.45men. TFH… Read more »

Top 4 in the 200free final tonight will be tight as always. All the usual suspects but Cartwright and Lewis hungry too.

Curious to see how M. Atherton goes today in the 100m backstroke and whether she can lower the Junior WR.

Teenagers needing to regain strength after a growth phase. Maybe 2018 back to best or when school allows.

Agree with you on the growth phase.

From what C1 said on the radio the other day the CGs trials will be in February which would fall less than a month after the girls go back to school after their summer holidays. So that should definitely work in their favour in increasing strengths-based programs going into the trials.