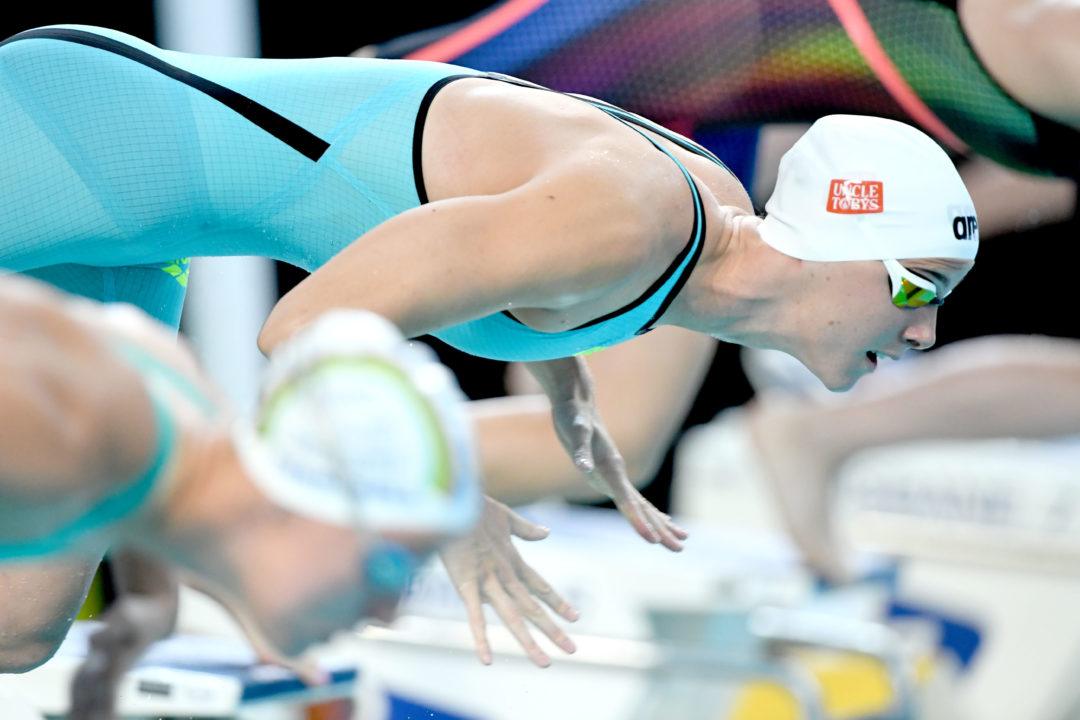 Cameron McEvoy doubled up on his 50m freestyle national title with a victory in the 100m race tonight, clocking 47.91 for the world’s only sub-48 outing so far this season.

And 25-year-old Benjamin Treffers denies Mitch Larkin of the backstroke treble, winning the men’s 50m sprint tonight in a time of 24.90. Clocking the only sub-25 outing of the field, 25-year-old Treffers earned a time within his own top 10 career performances, which is topped by his personal best and Australian national record of 25.54.  The Commonwealth Games gold medalist from Glasgow earned a 4th place finish in the 100m backstroke earlier in the meet. The Canberra swimmer transplanted recently to the Gold Coast, pairing up with sprinter James Roberts under Coach Ashley Callus.

Treffers’ time checks-in tied for #3 in the world this season in the rankings.

Larkin worked his way into the silver place position tonight in 25.10, followed by Joshua Beaver‘s time of 25.37 for bronze. After his prelims race this morning, Larkin was asked about the prospect of 50m distances being added to a future Olympic program, to which the Commercial Club swimmer replied, “I think it would be fantastic. More people could stay longer in the sport.”

With last year’s title winner Alicia Coutts having entered retirement, Australia was looking for its next 200m IM national champion and found one in multiple Olympic medalist Emily Seebohm. Already having claimed national titles and World Championship roster berths in the 100m and 200m backstroke races, Seebohm topped another event with her 2:11.89 victory in the 200m IM. This marks the legend’s 21st individual national title.

This event isn’t actually an ‘off-event’ for the backstroker, as she was national champion in 2015 and regularly swam the race before zeroing on just backstroke during the 2015/16 Olympic year. Her personal best  rests at a 2:09.93 and tonight she fell half a second short of the Aussie QT. She could still be discretionarily picked to swim the event in Budapest, as she is already on the team, but it’s not 100% Seebohm would actually race this at Worlds, given the chance. She may want to focus on defending her 100m/200m world championship titles instead of having to produce a time well under the 2:10 zone to even compete against the likes of Hungary’s Katinka Hosszu and Britain’s Siobhan-Marie O’Connor.

26-year-old West Coast swimmer Blair Evans notched a time of 2:12.99 for silver tonight, adding another medal to her 400m IM victory from earlier in the meet. She was followed by Melbourne Vicentre athlete Kotuku Ngawati, who touched in 2:13.15 for bronze. Ngawati earned silver last year behind Coutts, notching a personal best of 2:11.03.

4th place finisher tonight Taylor McKeown, the women’s 100m and 200m breaststroke winner here in Brisbane, achieved the biggest time drop from prelims to finals. She shaved 2.68 seconds off of her 2:16.00 swim to nab 2:13.32, just off of the podium.

To say Emma McKeon is on fire in Brisbane is an understatement, as the 22-year-old St. Peters Western star just nabbed her 3rd individual title of the meet. In addition to collecting the top prize in the 200m freestyle, 100m butterfly, as well as claiming silver in the 100m freestyle, McKeon set herself apart from the women’s 200m butterfly field tonight to dominate once again.

The winner of the women’s 200m butterfly event at the last 4 national championships is absent this time around, as 2016 Olympic silver medalist Maddie Groves is changing things up by training abroad. Thus, McKeon took full advantage, although it wasn’t an easy race for her, taking things out in a wicked fast 59.49. This betters her previous season-best of 2:09.33 set at the Vic Open, although she’s been as fast as 2:07.83 from a Grand Prix last July.

McKeon’s time tonight ranks her as the 4th fastest in the world and also notches another qualifying time for Budapest.

Falling short of the Aussie-mandated QT, but still earning hardware is 2016 Olympian Brianna Throssell who earned a time of 2:08.03 for silver and 6th fastest in the world. Throssell took silver to McKeon’s 100m butterfly gold here in Brisbane and the Western Australian swimmer notched a quick 2:07.87 in Rio. With those credentials and the fact she easily overtook the FINA A time of 2:09.77 with her outing tonight, there is a potential argument for her to be selected to the Budapest roster via coaches discretion.

17-year-old Laura Taylor of TSS Aquatics threw down a monster personal best for bronze, touching in 2:09.09 to hack almost 2 seconds off of her 2:11.18 prelims outing. Taylor has never before seen 2:09 territory, so to drop down into 2:09 LOW is remarkable for the teen.

16-year-old Ariarne Titmus just proved her 800m freestyle victory from night one wasn’t a fluke, reaping her 2nd national title tonight in the women’s 400m distance, her specialty. Hacking over 7 seconds off of her morning swim, Titmus crushed a gold medal-winning mark of 4:04.82 to not only qualify for Budapest, but slide into the 2nd spot in the world rankings. Fun fact – Titmus’ entry time of 4:09.81 had already been superseded by her 400m split time of 4:08.95 from the 800m win in 8:23.08.

Runner-up status tonight went to 5k open water national champion Kiah Melverton who finished in 4:09.80, a solid time, but off of her previous season-best of 4:08.07 at NSW Championships earlier this year. Dahlas Rogers touched in 4:11.38 for bronze in the race tonight.

Mirroring her performances at the 2015 World Championships where she raced her way to a 50m/100m freestyle double, Bronte Campbell (C2) accomplished the same feat here in Brisbane. Already nabbing gold in the longer distance in 52.85, the 22-year-old Commercial club swimmer scorched a 24.56 to take the splash n’ dash, topping sister Cate by just .03 of a second. The sisters were separated by just .01 after prelims (24.75 Bronte, 24.76 Cate).

Cate secured the silver tonight in 24.59, an especially impressive time given her hindering .81 reaction time, which is just mind-boggling slow for this seasoned racer. For perspective, Bronte’s was .68. Both women have actually already been faster this year.  Bronte clocked a 24.60 from NSWs earlier this year, while Cate was 24.47 at that same meet, a mark which is positioned as the 4th fastest in the world this season.

Turning heads again was 18-year-old Shayna Jack, the woman who already nabbed a roster spot in the 100m freestyle with her 4th place performance. She killed a personal best of 53.40 in that race and blasted a new PB in this shorter distance as well, racing to the wall in 24.66 for bronze. That hacked over .2 off of her lifetime quickest.

With C1 opting out of the World Championships and Jack having already made the squad for the freestyle relay, things look good for the Commercial swimmer to be discretionarily selected to the Budapest roster in this event.

400m freestyle Olympic champion Mack Horton pulled off a rare triple, securing the 3rd individual title of his 2017 Aussie Championships. After topping the filed in the 400m night 1, he surprisingly took the 200m freestyle out of lane 8 to beat favorite Cameron McEvoy and touch out young gun Kyle Chalmers.

Tonight, Horton won his bread-and-butter 1500m event in a time of 14:51.21, well under both the Aussie-mandated QT and the FINA A cut. And he wasn’t alone. 22-year-old Jack McLoughlin of Chandler doubled up on his 800m freestyle victory with a silver in this event. Stopping the clock at 14:54.95, McLoughlin, too, qualified for the World Championships squad in this event. The two Aussies sit as 3rd and 5th in the world rankings.

A little surprised over where the times for swimmers in place 3-8 are, considering that from what I hear on TV that swimming is one of biggest sports in Australia. In some events the 1-2 place times surprised me, with that in mind the Aussie QT times are very surprising to me. I know it is the year after the Olympics, but haven’t the middle and later parts of the finals been closer/faster in the past?

How many of the non retired Aussie Olympians skipped the trials?

There are just 24M people in Australia, many of thel living far from big cities and their high level swimming clubs (for example, Titmus seems to be the first tasmanian to be national champion, and she has to train outside of the island – so basically 500 000 Tasmanian inhabitants are out the radar).

You can compare it to Florida (21M)… there are top swimmers in Florida for sure, but if you select only Florida swimmers’ results in US trials, you will see that the level decreases quickly. Other comparisons possible: Texas (27M), Taiwan (23M), Ghana (27M). In my opinion, the average level in national level Australian swimming is the best you can find in terms of “per capita” ratio… Read more »

On the world rankings, Paltrinieri is so good he has is own font

The team has been announced and was listed on air but wasnt able to get all the names down. These from what I was able to scribble down.

Of the younger swimmers who won selection events but missed QT, both Cave (M100BRS) & Lewis (M200IM) were selected.

As expected McKeown Sr named despite missing both QTs and they’ve given themselves medley relay “cover” by also naming Hansen.

Ngawati possibly lucky to get a ticket (presumably for 200IM, maybe for 4×100 heats) and Madi Wilson extremely lucky (4×100 relay)

No 2nd W400FR although Melverton selected for Open Water so there may be some opening there.

All in all a Championship that par’d my expectations. Nice to see a few breakouts (Jack, Titmus, Wilson), and most of the big names who want to go to Budapest qualified, not always in great style, but now they’re on the team they have time to get back to their best.

On to Japan, then a few European trials!

Don’t expect too much from French trials…. 🙁

You won’t see much from the french. Stravius Metella maybe, that’s it.

Ariarne Titmus and Jack Cartwright are the best news for aussies after these Champs, with a lot of absences (even beyond what expected in a post-Olympic year).

PS Emma McKeon still experimenting how to swim the 200 fly.

It’s ‘mind-boggling’…ha! For someone who’s so fast IN the water, it’s striking to me how slow she is ‘OUT’ of it…imagine if she consistently hit RT in the .65 range and then continued to do the in-pool damage.

Liesel was so slow off the blocks the media used to complain ! Still she had a killer turn . I actually think Cate is just off with the faeries . The unbearable lightness of being / being there . You find that in other fields with ppl of extraordinary talent .

Agreed! She was a huge highlight of the meet!

A name to remember . She is very talented and still only 16 .