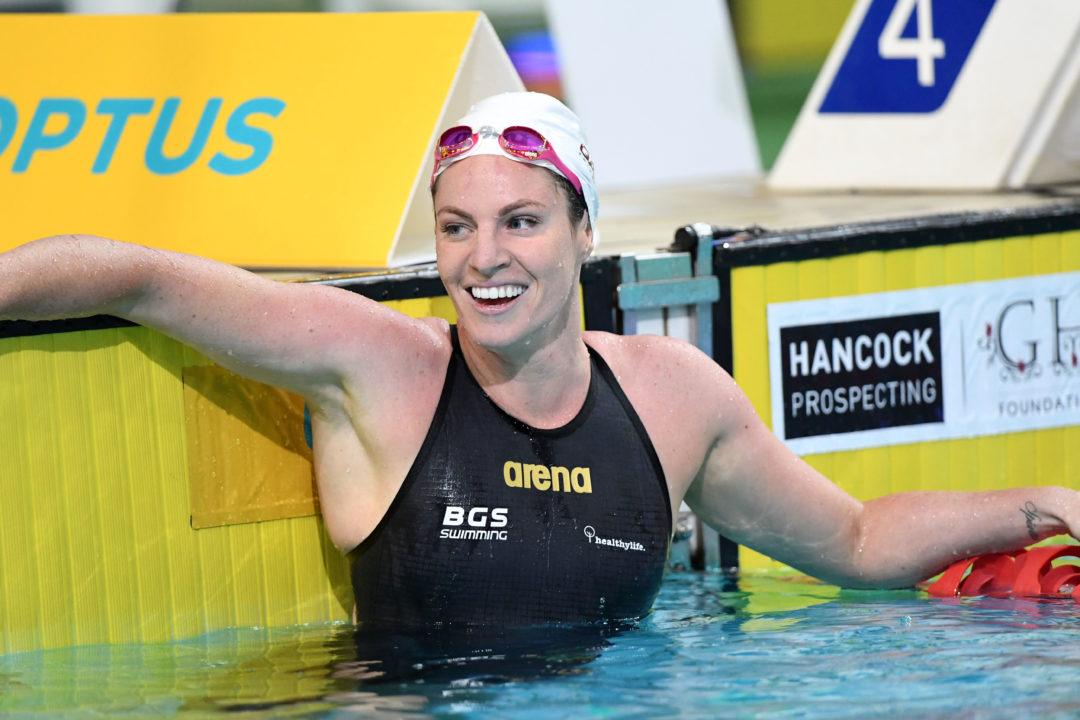 Speaking to her elite longevity, Emily Seebohm has just been named to her 6th World Championships roster and she's still only 24 years of age. Current photo via Delly Carr / Swimming Australia Ltd

The 2017 Australian Swimming Championships concluded today, which meant that the door had shut on qualification for this summer’s World Championships in Budapest. Australia’s selection criteria was rather succinct, but still left room for some coach intervention in order to reach a possible maximum number of 52 athletes total (26 men, 26 female).

First and second place finishers in individual Olympic events in Brisbane’s ‘A Final’ qualified for a spot on the roster, provided they swim a time that equals or betters the Swimming Australia qualifying mark listed below, For anyone who came close to the mark, some coaching discretion would be enacted, especially if the swimmer had already qualified in another event. The resulting roster reveals that these types of decisions did indeed take place.

As the meet went on, we tracked qualifiers day-by-day and made predictions as to who would be granted a spot on the roster even without meeting the Aussie-mandated QT. But, now Swimming Australia has released the official roster for the 2017 World Championships.

Anybody any idea why Richard Scarce Cam McEvoy’s coach has missed out on selection? Wouldn’t Cam be the highest ranked Aus swimmer based on these trial times?

Louis Townsend sneaks a relay spot, lucky him. Excited to see how the younger SPW guys progress (all still in Boxall’s squad I assume), Cartwright, Lewis and Titmus.

The McEvoy clan needs to up its game.

He does have a brother who swims, he has been at the Australian trials, but not quite the elite level.

there’s will seebohm too, how many sets of siblings could there potentially be

Why no Jess Ashwood?

John Wood – she declined a spot. Report should be out shortly.

They certainly made very generous use of ‘relay cover’ but, in fairness, almost all selections can be fairly defended and, for the most part, discretional selections which will lead to individual swims are going to the younger/newcomers who will hopefully benefit from the international exposure.

The one event where I cannot see a potential entrant is the W400IM but that’s fair enough as nobody was within the same postcode as the QT. Seebohm is unlikely to swim the W200IM so there’s only likely to be one W200IM entrant (Ngawati). Ditto W200FLY (McKeon decline, Throssell sole starter) and only one in W200BRS (McKeown Sr). Also potential of sole entrant W400FR (Titmus) unless Ashwood takes up invite/swims a 400FR time between now… Read more »

Thanks for your always in-depth and interesting analysis of Australian swimming.
Are you Australian?

A half breed !! Born in AUS but until teens lived mostly in RSA (still a dual citizen). Uni in AUS & USA, have lived/worked UK/W.Eur & Asia but been based back in AUS for past 16 years.

Good summations of the relays, I see it more of potential of what we can do going forward.
M4X100 changing of guards with Chalmers, McEvoy & Cartwright leading the way, need another swimmer or 2 down to mid 48s or lower, but no depth like the Americans, needs all guys firing at once. More potential going forward then gold at WCs.
M4X200, again changing of guards & hopefully change from looking good on paper to actually performing, Horton & Chalmers with potential to improve, solid 1.46-1.47 men, but like you said no standout.
M4x100 Med, Weak Breaststroke, Butterfly, need improvement from Larkin, a fair way away.
W4x100, very excited of prospect of C1, C2, McKeon &… Read more »

I see more upside than downside for the Aussie relays given the youth of the team. A medal in every relay would not come as a shock but I agree the W4X2 looks less than likely to pick up a medal.

Yes, McEvoy performed a similar Lazarus act to nab silver in Kazan but you can only keep going to that same well so many times before coming up empty.

How it stands now is that Larkin may not be better than his Rio swim, BRS leg likely to take a major dive south with Packard’s absence and fly prob on par with Rio at best. If Larkin COULD return to somewhere near his Kazan level then it would help immensely but the major hit on BRS is likely to put them well behind most contenders at half way. Ergo .. still going to need one god almighty anchor leg to get them anywhere near the medals