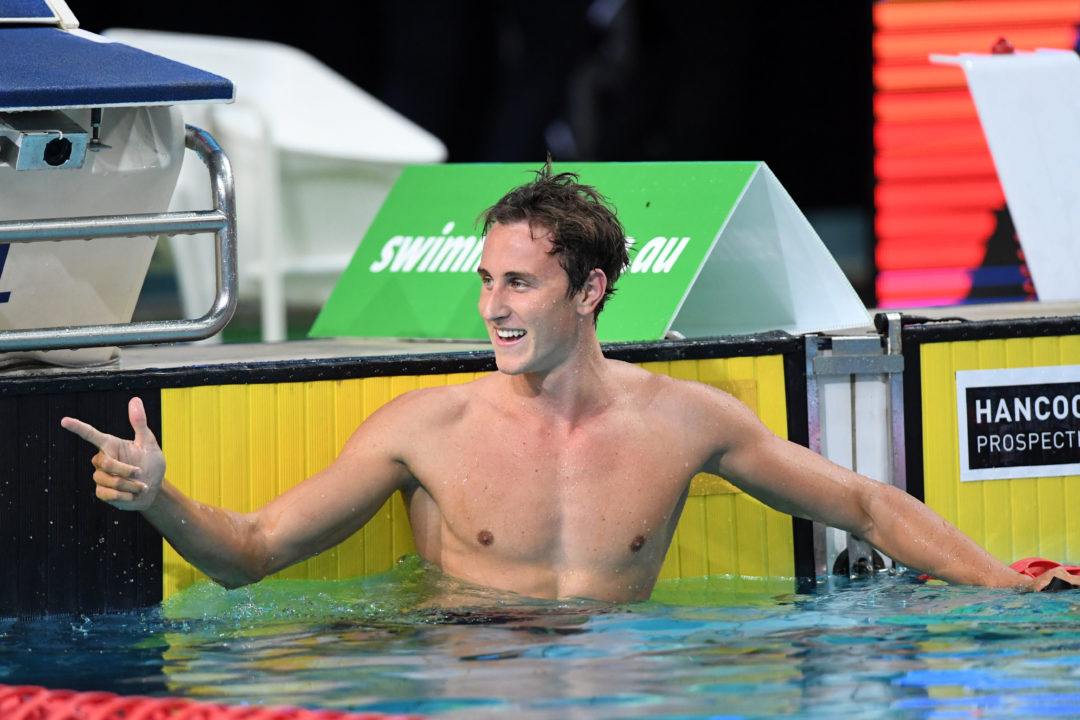 The final day of competition wrapped up today in Brisbane at the 2017 Australian Swimming Championships with the final Aussie roster for World Championships to be announced shortly. In the meantime, re-live one of the hottest races of the entire competition, last night’s men’s 100m freestyle final.

The fastest 100m freestyler ever in a textile suit, Cameron McEvoy, faced off against 2016 Olympic champion in the event Kyle Chalmers, with the race able to go either way. However, it was McEvoy who topped the field in a big way, notching a time of 47.91 for the world’s first sub-48 mark of the season. Chalmers settled for silver in a solid 48.20, while young Jack Cartwright finished in a personal best of 48.43.

Watch some of the in-pool action, while hearing how the race went from the swimmers’ perspective in this vignette, courtesy of Swimming Australia.

In the marquis race of the night, the fastest 100m freestyler ever in a textile suit, Cameron McEvoy, was pitted against the young gun gold medalist in the event, Kyle Chalmers. The 22-year-old Bond swimmer came out on top, as McEvoy claims the world’s first 47-point time of the season.

Splitting 22.27/25.18, McEvoy nailed an impressive 47.91 to top the world rankings, his domestic field and earn his 2nd individual roster berth for Budapest. He already won the 50m freestyle decisively in a world-topping 21.55.

Chalmers also scored a qualification mark, touching in a solid 48.20, the 5th fastest outing of his young career. Given the fact the Marion star was too sick to swim the entire NSW Championships last month, the Rio hero can consider the job done in Brisbane. He now sits as the 2nd fastest swimmer in the world this season. FYI, this is the 2nd 100m freestyle race in a row where Chalmers has produced a comparatively slow reaction time of .71. McEvoy was .62, while Louis Townsend was .58, so the 18-year-old hulk would benefit from a quicker blast off the blocks.

18-year-old Jack Cartwright impressed yet again, dropping his personal best down from 48.91 to 48.81 in prelims, then down almost another 4/10 down to 48.43.  Splitting 23.52/24.91, Cartwright dipped under the quick 48.49 Aussie-mandated QT for Budapest and just earned a slot on his nation’s World Championships 4x100m freestyle relay. The rising sprint ace now sits as 3rd fastest in the world rankings. Remember, Cartwright does have international racing experience having won gold in this event at the 2016 Junior Pan Pacific Championships.

Fabulous technique by Mc Evoy – i like his style . Cartwright was finishing very strongly as well . Great youngster