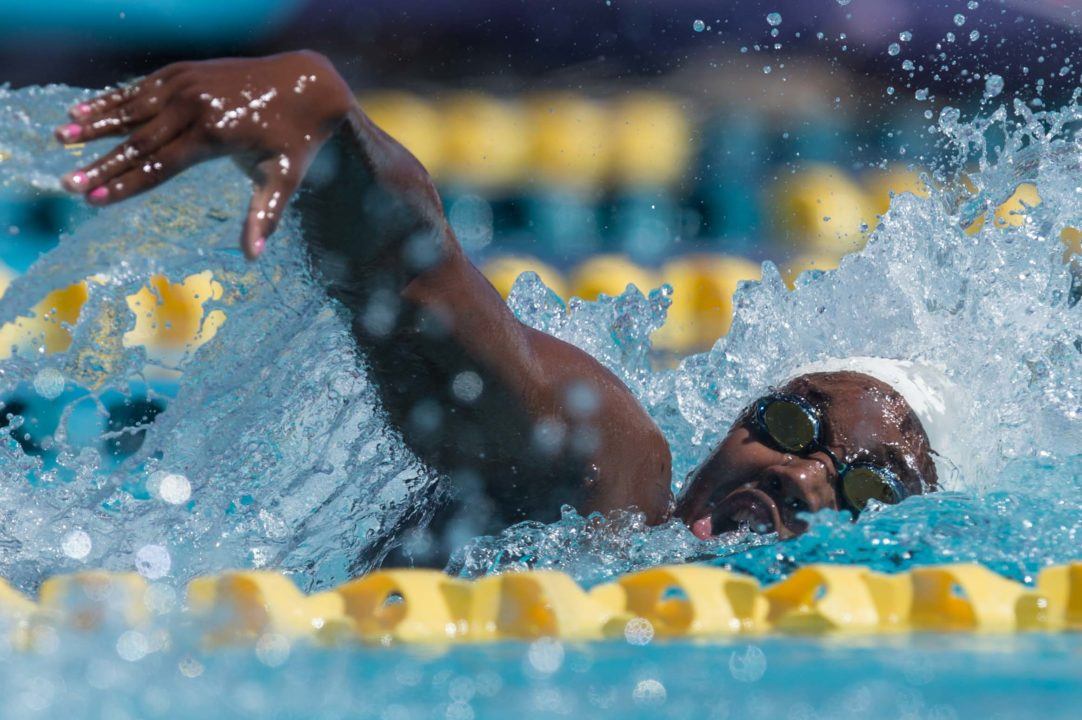 Cassidy Bayer, coming off of an injury in the fall, is getting her confidence back 1 race at a time

Chase Kalisz put together another massive points haul at the Arena Pro Swim Series stop in Atlanta, enough to run down up Josh Prenot for the series points lead with two stops remaining.

The first finals session from Atlanta is bound to be an exciting one, with plenty of great races on the docket.

Highlights tonight include Katie Ledecky‘s 100/400 free double, which will be separated by a mere 13 minutes according to tonight’s timeline. Kelsi Worrell and Tom Shields headline the 100 fly, while both the men’s and women’s 200 breast events should be fun with plenty of contenders in each.

Simone Manuel will look to lower her pool record from this morning in the women’s 100 free, while the men’s event became a lot more wide open with Park’s scratch. Joao De Lucca, Blake Pieroni, Mohamed Samy and Michael Chadwick were all sub-50 this morning. Both 400s will likely be run away wins for Ledecky and Park, though both Felix Auboeck and Clark Smith could give Park a run in the men’s event.

Kelsi Worrell was out fast in 26.98 and increased her lead coming home, recording a time of 57.50 to break a ten year-old pool record and move to #6 in the world.

Hellen Moffitt had a strong back half to run down Rebecca Smith for 2nd, getting to the wall in 58.59 to Smith’s 58.72. Top seed from this morning Aliena Schmidtke took 4th in 59.04.

After Tim Phillips had the lead at the turn, Cal’s Tom Shields used his phenomenal underwater skills to take the lead and he held strong throughout the back 50, touching in a time of 52.09. That swim improves his season best of 52.42 and moves him up from 25th to 12th in the world rankings.

Texas’ Jack Conger took off about half a second from the morning to touch 2nd in 52.56, just ahead of the top seed from the morning Santiago Grassi of Auburn. Phillips ended up 5th in 52.92, just behind Pavel Sankovich (52.81) and 0.01 ahead of Matthew Josa.

In the B final, Marcus Schlesinger threw down the fastest opening 50 of anyone in 23.85, ultimately winning the heat by nearly a second in 52.70.

Katie Meili took off from lane 7 tonight and never looked back. After winning this event in Mesa in mid-April, she topped that performance with another win in a time of 2:23.18, a new best time. She had the fastest opening and closing 100 of anyone in the field, putting together a complete performance. She improves from 21st to 5th in the world for 2016-17.

Behind Meili, rivals Lilly King and Kierra Smith battled hard the entire race, with King getting the touch by three one-hundredths. Melanie Margalis took 4th in 2:26.56. Bethany Galat took the B final in 2:31.30.

In a very tight field, Chase Kalisz pulled away on the third 50 and held everyone at bay coming home, winning the event in a new best time of 2:10.74. Both Cody Miller and Nicolas Fink were in the hunt the whole race but couldn’t hang with Kalisz on the last 100, taking 2nd and 3rd respectively. Carlos Claverie took off over 2 seconds from the morning for 4th in 2:12.11.

Simone Manuel was out first and extended her lead coming home, touching 1st in 53.82, just off her morning swim of 53.75 that was a new pool record. Sandrine Mainville was out just a tenth behind Manuel and managed to hold off the rest of the field for 2nd in 54.44.

Mallory Comerford, Amanda Weir (54.59) and Katie Ledecky (54.69) all had a strong back half but were unable to run down Mainville for 2nd, taking 3rd, 4th and 5th respectively.

Michael Chadwick got out fast, but Blake Pieroni and Joao De Lucca charged hard coming home to make it a very close battle to the wall. At the touch, it was Pieroni in 49.18, managing to hold off De Lucca who had the fastest back 50 in the field at 25.28. Chadwick took 3rd, with Matias Koski (49.71) and Jacob Pebley (49.80) both under 50 seconds as well.

At the halfway mark it was a battle between three women for 2nd, with Joanna Evans, Cierra Runge and Hali Flickinger all in the mix at 2:03s. However, Evans and Flickinger pulled away on the back half, with Evans getting the touch for 2nd in 4:08.44 to Flickinger’s 4:08.62. Runge finished 7th, though just half a second back of 4th.

Vien Nguyen held off late charges from both Easop Lee and G Ryan to win the B final in 4:11.52.

Just as Ledecky, Park Tae Hwan was well ahead the entire race, winning in a very fast 3:44.38. That swim is well under the FINA ‘A’ standard of 3:48.15 and will qualify him for the World Championships. Park, who closed in an incredible 26.27, shattered the existing pool record by over three seconds. He improves his #4 world ranked time of 3:44.68 set back in November.

Club Wolverine’s Felix Auboeck had a solid swim to take 2nd in 3:50.39, followed by Patrick Callan who shaved over five seconds off his entry time for 3rd. The race for 4th was tight, with swimmers 4 through 8 all clocking 3:53-something, but it was Marcelo Acosta who got the touch in 3:53.11.

I am very confused that Where is Conor Dwyer???

Usual KL domination and another great time in the 400 free. I know we are used to greatness with her but let’s not be jaded. 4.00.98 was a world record not a long time ago (until 2009 and the magical suits)…. And I like her way to swim it. 2.00.02/2.00.96.
Simone dominant in the 100 free. Times will drop when it counts the most.
Kalisz in the shape of his life. If he can peak at the right time and doesn’t waste his energy in too many events, I don’t see him beaten in the 400 IM at worlds.
A good win for Pieroni. He could be the 4th guy of the US relay in the world… Read more »

Bobo, there will be no American on the podium in the IM’s. Not even Kalisz.
Otherwise you posted some weeks ago that how could somebody win the Hungarian Nationals in w100breast with 1:09,90. I don’t know either, but Réka Vécsei (from Miskolc) is 14 years old at the moment and she is swimming very nicely (I was there). And she won the 200breast in Debrecen, too.

How can people here not comment on the fact that a 17 year old from OKLAHOMA (I’m from OK btw) went a 3:51 400 free and dropping 2 more seconds from prelims and 5 from his best time and beat international level people??? SMH!!! In my opinion Pat’s 400 was the highlight of the day!! ??

Nice swim!!! Numbers like that suggest he is rested, shaved and tapered. Looks like he is swimming one event a day. I think all the big dogs in the 400 also hit the 800 and multiple events yesterday. Fresh legs are fast legs. Still props to the kid. Nice time drop.

don’t sleep on Chase Kalisz, he is becoming insanely versatile. You heard it here first….Chase will be swimming 4+ events at worlds this year. He will also break a Wr, I’m not sure in which event it will be but he is looking really good and ive heard crazy stories about his training recently.

he’s great, but a wr? not happening

True but I wouldn’t totally rule it out… he looks awesome. 4:04 wouldn’t surprise me and that’s getting pretty close!

4:06.75 last summer; blowing out best times in mid-season meets ever since, I guess you’re right, he’ll be lucky to crack 4:10 this summer.

I still don’t think he,s going to beat hagino in the 400 IM if hagino,s elbow is fully healed. Kalitz is slightly better at butterfly. I think hagino has a best of 1:56 or so in the 200 fly. Kalitz is also better at breaststroke. Hagino is better at backstroke and freestyle.

alright but hes getting faster and faster, and I assume hes unrested at this meet.

Lily king training harder than everyone else in that race

Actually I’m impressed with that effort from her. She looks like she is stepping up the. 200 breaststroke from last year.