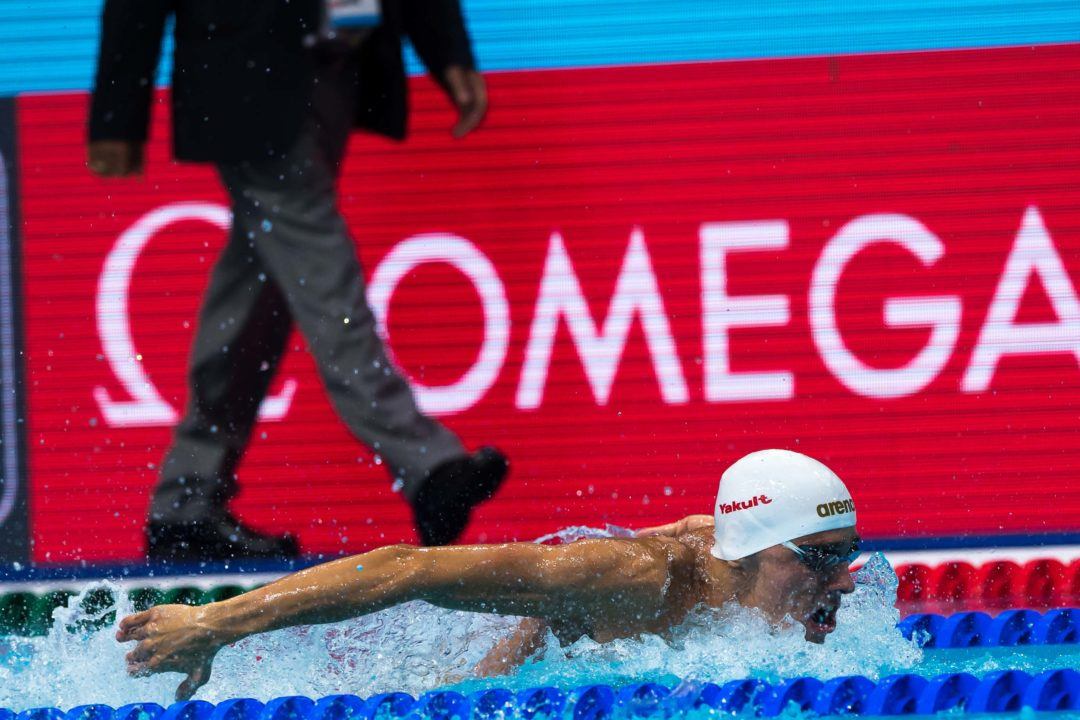 National record holder Alexis Santos will have a shot at improving upon his 12th place finish in the men's 200 IM at the Rio 2016 Games. Archive photo via Mike Lewis/Ola Vista Photography

As confirmed by the official entry lists for the Tokyo 2020 Olympics, Portugal will be sending a total of 3 women and 4 men to swim at the Games.

Many of Portugal’s entrants at the Tokyo 2020 Olympics competed at the 2019 World Swimming Championships. Among those who swam in Gwangju was Alexis Santos who finished 12th overall in the 200 IM with a 1:58.62 in the semi-final. Santos holds the Portuguese record in that event at a 1:58.19 which he posted at the 2019 Portuguese Championships. Santos also raced to a 12th place finish in the event at the 2016 Olympics, having swum a 2:00.08 in the semis.

Holub will be joined in the 1500 freestyle by teammate Diana Duraes who holds the Portuguese record in the event at a 16:15.12 from February 2020. Dures raced the event for Portugal at the 2019 World Championships and hit a 16:30.67 for 18th overall. Dures also holds the Portuguese records in the women’s 200, 400, and 800 freestyles but won’t be racing any of those events this summer.

Gabriel Lopes will be making his Olympic debut alongside Santos in the men’s 200 IM. Lopes is entered with a 1:58.59 in the event which is within a fraction of a second of Santos’ national record. Lopes raced the event for Portugal at the 2019 World Championships and placed 15th overall in a 1:59.56.

A third 2019 Worlds semi-finalist who is set to race in Tokyo is 200 butterflier Ana Monteiro. Monteiro swam a 2:09.43 during the prelims of the event in Gwangju and went on to place 12th overall with a 2:09.72. Monteiro’s PB in the event is a 2:08.03 national record which she swam for a 5th place finish at the 2018 European Championships.

Rounding out the Portuguese Olympic roster will be Francisco Rogerio Santos in the men’s 100/200 backstrokes and Jose Lopes who is entered to swim the 400 IM and 800 freestyle.

Portugal has never won an Olympic medal in the sport of swimming and prior to Alexis Santos‘ 12th place finish in the 200 IM back in 2016, the nation’s last semi-final finish came in 1988 when Alexandre Yokochi placed 9th in the men’s 200 breaststroke with 2:18.01. Yokochi also swam that event at the 1984 Games where he wound up with a 5th place finish in a 2:20.69.

Off topic, but the NYT has suspended writer Karen Crouse after it was revealed she had agreed to cowrite a book with Michael Phelps without telling her superiors. She wrote a long article last month talking about all the work Phelps has done since his retirement and apparently when editors found (just recently) that she had already signed a deal to help Phelps write a book, they attached an editors note to the article, removed Crouse from Olympics coverage and may end up terminating her.

Hmm, I’m not familiar at all (except for what is mentioned briefly in this article) with the ethics of journalism, or what the NYT’s ethical rules are but this seems like it shouldn’t be a violation given that Phelps has retired right? What am I missing?

It’s considered a conflict of interest for her to write an article about Phelps (like she did last month) without disclosing that she is co-authoring a book with him.

When I saw the headline I immediately thought..Santo Condorelli is going to Tokyo for Portugal now?

Yokochi placed 7th in 1984. The only final a Portuguese swimmer ever did at the Olympics. Lets hope for another one in Tokyo! Go Portugal