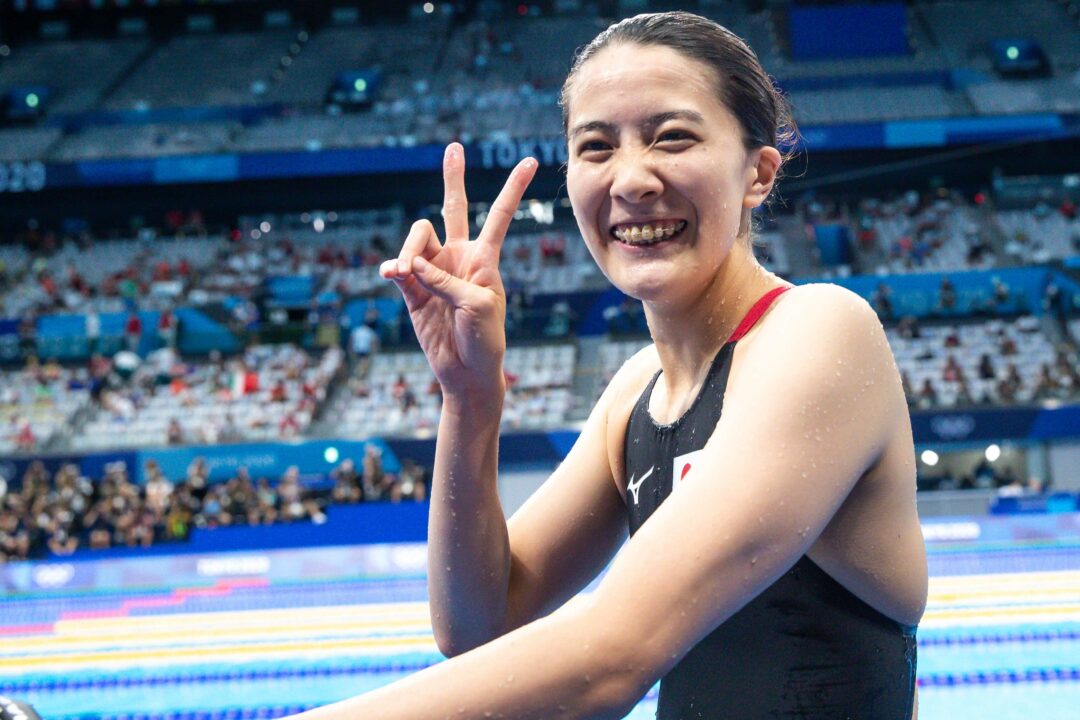 In an interview, double Olympic gold medalist Yui Ohashi revealed two major health struggles that have impacted her career: one physical and one mental. Archive photo via Jack Spitser/Spitser Photography

A profile on the Olympic website sheds some light on the previously-unreported ups and downs of Ohashi’s swimming career. The Japanese IMer was diagnosed with anemia in 2015, calling it “rock bottom” for her career to that point. But Ohashi says she struggled even more in a mental health battle in 2019.

In 2015, a 19-year-old Ohashi was in between her freshman and sophomore years of college when she started feeling easily fatigued and found her performances getting worse even as she trained harder and harder. The profile notes that Ohashi finished dead last out of 40 swimmers in the 200 IM at Japan’s national championships that year.

Struggling for answers, Ohashi had some medical tests done and found out she had anemia, a condition where the body lacks enough healthy red blood cells to carry oxygen efficiently, often leading to intense fatigue and shortness of breath.

“I hit rock bottom in 2015, Ohashi says in the profile. “I found out that I had anemia, which was the reason for my poor condition. After my health started to improve, I began to think, ‘I want to compete in the final at the final selection for the Rio 2016 Games. I also want to set my best record.’ It was the first time that I felt such a strong determination. The experience was probably the turning point of my swimming career.”

But that’s when the mental struggles became even more overwhelming than the physical ones had been. Ohashi says she felt the pressure building, creating more and more anxiety within her.

“I get nervous easily, and I imagine all kinds of things that could increase my anxiety,” she says in the profile.

After getting disqualified from the 200 IM at the 2019 World Championships, Ohashi says she could do “nothing but weep, and had no idea how to regain her confidence.”

“I put pressure on myself and it really affected me,” she says. “When I overcame anemia in 2015, I thought that I would never have to suffer like that again, but in 2019 I hit another wall. Anemia is a physical condition so the problem is very clear. In 2019, though I was physically in great condition, my time wasn’t so great. The problem was mental, and there was no clear solution. In that sense, I was struggling more than in 2015.”

Sayaka Muramatsu, an official with Japan’s swimming federation, encouraged Ohashi in that moment – something Ohashi says helped turn the tide for her mental health.

“It would be disrespectful to yourself if you don’t swim with confidence knowing that you devoted so much effort and did what you can,” Muramatsu told Ohashi.

Ohashi now says her two major struggles have helped shape her priorities as an athlete.

“Because I went through these difficult times, I realised once again that choosing the race that matters to me and focusing on swimming that race would produce good results,” Ohashi says.

“Things don’t always turn out the way I hope it would, but I’ve been able to collect my thoughts over the past year or so. Thinking about why I compete or what I want to do in the future, and experiencing all these different thoughts and feelings have made me a more mature person.”

Before the Olympics began, Ohashi said she was emphasizing improving her training base and leaning into her strong points – long, efficient strokes with minimal drag – in order to challenge the more power-oriented swimmers in the IM fields.

The strategy of leaning into strengths clearly worked for Ohashi, who is currently one of just two swimmers to win two individual gold medals so far at these Tokyo 2020 Olympics after winning both the 200 IM and 400 IM so far this week.

The most beautifully technical swimmer on the planet. Pure joy to watch.

An absolutely delightful, classy young lady with some of the most beautiful swimming strokes. Congratulations on your excellent victories!

True fighter! I hope we can get more interviews from her! <3

She’s been so perfect this week! Her technique, pacing, turns, underwaters, and finishes are awesome. And the way she celebrates is so wholesome. No showboating, just pure joy.

She’s been fantastic. Loved her reactions to realizing she won gold in both events.

just love her! So happy she won. The struggles athletes go through are incredible.

Along with Sjostrom, she’s been my favorite international swimmer for years. Watching her swim a 200 IM or 400 IM is like watching someone paint a masterpiece. There is no wasted movement; it just looks effortless, and she proves time and again that technique can beat raw power. The fact that she has been able to overcome so much and manage the heavy expectations of a host nation is remarkable. She is now the only Japanese woman to win two gold medals in the same Olympics.

In another time, can you imagine the electric atmosphere in the stands and the deafening, raucous applause she would have received when she touched the wall in those two wins? She deserved every… Read more »

I feel for all the Japanese athletes, winners or not (looking at you Seto and Sato). COVID really robbed them of something special. Sigh.