Why You Should Push Rather Than Pull The Water in Backstroke 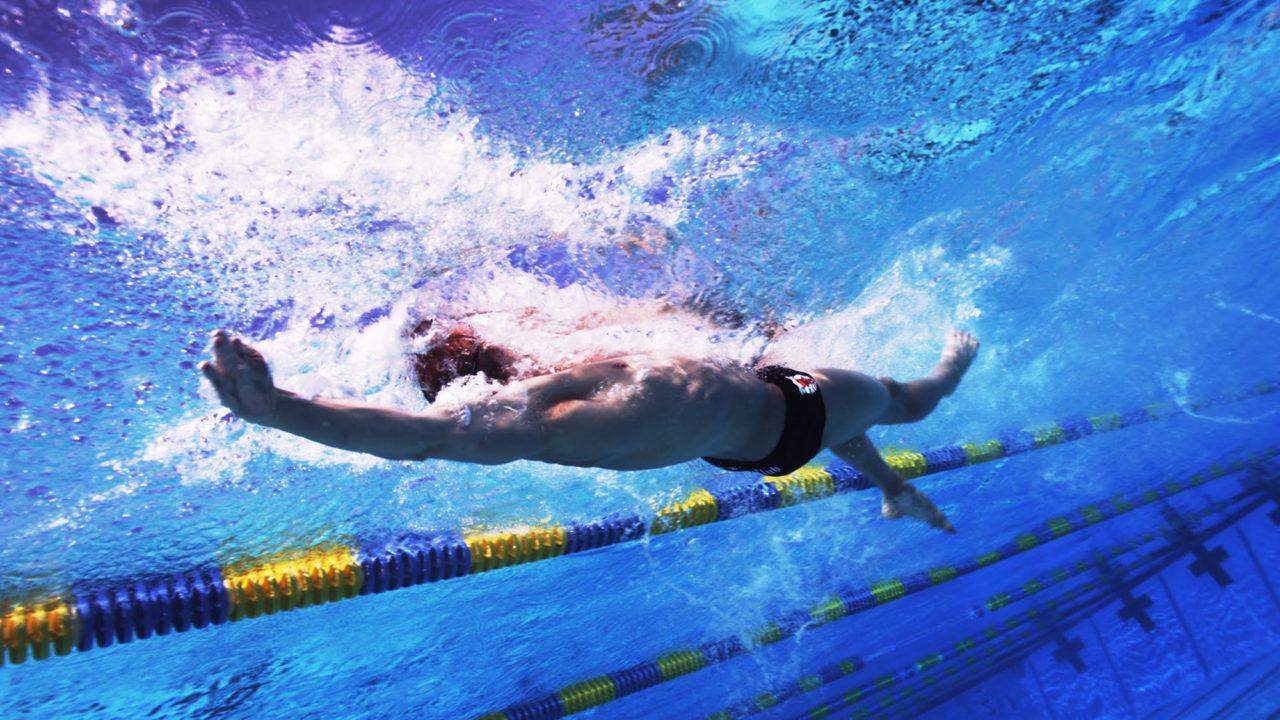 One of the most common mistakes I see in backstroke is with the pulling motion. Most backstrokers pull with an arm that is relatively straight, as if the arm were an oar pulling through the water. Current photo via The Race Club

One of the most common mistakes I see in backstroke is with the pulling motion. Most backstrokers pull with an arm that is relatively straight, as if the arm were an oar pulling through the water. Some drop the straightened arm deeper into the water, almost as if they are scooping the hand through the water rather than pulling. Neither pulling motion, with a straightened arm nor a deeper scooping motion, will create a lot of propulsion in backstroke. An oar will work to move a boat forward because most of the oar is above water during the stroke and the boat causes less drag than a swimmer. The blade of the oar is considerably larger than the hand to create propulsion. The person in the boat has many biomechanical advantages in pulling that large blade through the water over a swimmer pulling his hand on his back.

The reason that most backstrokers pull with a relatively straight arm has nothing to do with biomechanics. The swimmer is trying to avoid the mishap of breaking the surface of the water with the hand during the propulsion phase of the pull, which would weaken the pull. The problem of the straight arm is actually a complication of another problem; failing to rotate the body sufficiently.

We’ve discussed the importance of quick body rotation in freestyle and backstroke as a coupling motion. The coupling energy works to increase the propulsion of the pulling arm. When a backstroker rotates his body more, he also puts the shoulder into a more favorable position for a stronger pull. With more rotation, the shoulder joint moves into a more flexed or positive angle; a position of greater strength. Increases in coupling energy and strength are two good reasons why a backstroker should rotate the body quickly from one side to the other. Yet, even with those potential benefits, most swimmers do not rotate far or fast enough because that requires more work. As a result, to resolve the problem of catching air with the pulling hand, the swimmer simply chooses to straighten the arm, rather than rotate the body more.

The straight arm not only weakens the pull, it also increases frontal drag, similar to the way a deeper pulling motion in freestyle increases frontal drag. While a fast stroke rate may be the single most important technique to improve backstroke, a quick and sufficient rotation of the body is also critical to attain more propulsion. Enough rotation will enable the swimmer to pull correctly with enough bend in the elbow, yet still keep the hand under water.

At The Race Club, we like to teach the concept in backstroke of pushing the water backward, rather than pulling the water backward. This concept requires that the swimmer rotates to about 45 degrees at the entry of the pulling hand into the water. Once the little finger enters the water directly above the shoulder, the swimmer needs to continue pointing the elbow toward the opposite end of the pool, bending the elbow as the hand pushes backward closer to the body. The maximum bend of the elbow ranges from 100 to 130 degrees, but once the pulling motion begins, the arm never approaches being straight (180 degrees), until the pull is completed. Pulling with this technique will reduce the frontal drag caused from the upper arm, which is responsible for most of the frontal drag during the pulling motion.

The most effective drill for teaching this backstroke pulling motion is the one-arm drill with fins, keeping the opposite hand at the side.

As the little finger of the pulling arm enters the water, the opposite shoulder should elevate and touch the swimmer’s chin, assuring that enough body rotation is taking place. Once the hand is in the water, the swimmer can concentrate on keeping the pulling elbow pointing forward. The result is a sensation of pushing rather than pulling the water as the hand moves backward.

We now have three compelling reasons to pull with this technique in backstroke.

For a faster backstroke, get on your side and push the hand backward through the water, rather than pulling it through. You won’t be disappointed.

I am impressed with the text for the backstroke with respect to the protection of the shoulder from injury.

Not sure it can work for everyone. I remember seeing Nick Thoman swimming almost straight arm backstroke and also Ryan Lochte and Matt Grevers backstroke technique suggests straight arm pull. Even recently I saw Camille Lacourt swimming like this as well. I am not certain about the exact angle they bend but I would say 130-150

None of them swim with a straight arm. Thoman is a bit more open or straighter than most, but the range is usually between 100 and 140 degrees of maximum bend. You can see Nick drill on this video link: https://www.youtube.com/watch?v=0UVIdDWwE14, but David Marsh says about 110 degrees is right…and I agree.

Any videos demonstrating this?

We shot a lot of the one arm drill in our most recent production, which will be released in early 2018. Don’t wait until then to start practicing this drill!