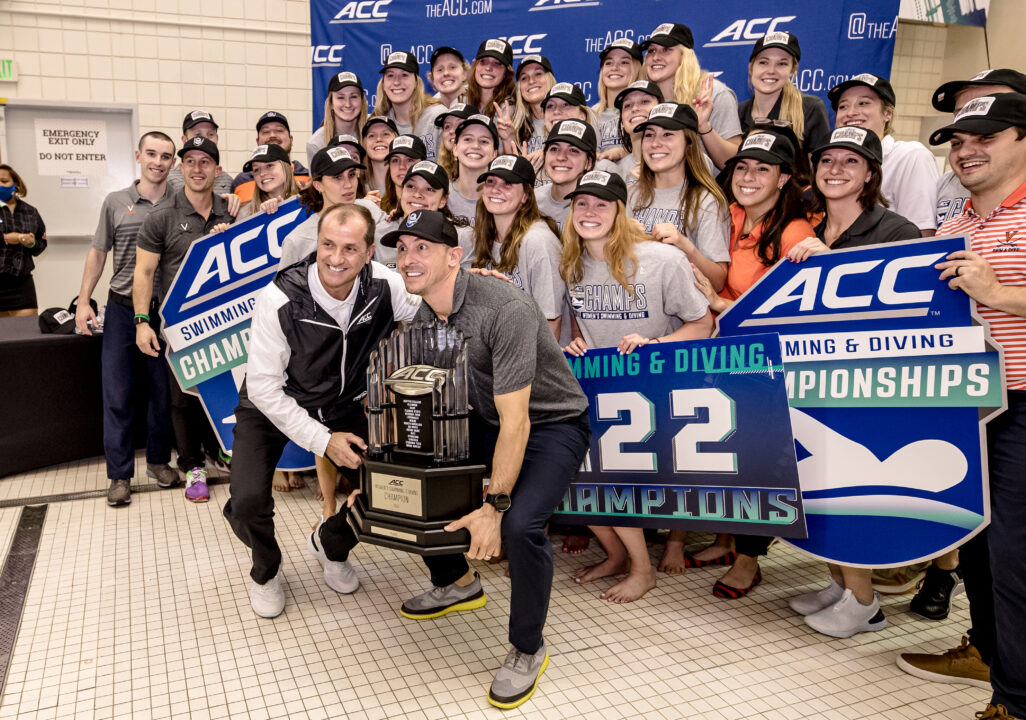 The Virginia Cavalier women won their third-straight ACC title, their 18th overall, with mixture a top-end talent, versatility, and depth. Current photo via The ACC

It’s also the fourth title under head coach Todd DeSorbo. The Cavaliers were already a solid team under previous head coach Augie Busch, but they’ve taken it to a new level the last few years, and they won this week with a mix of top-end talent and depth. Thanks to several incredibly versatile swimmers who coaches can use like the aquatic equivalent of a Swiss Army knife, the Cavaliers broke the American and U.S. Open Records in the 200 free relay, 200 medley relay, and the 400 medley relay. They also set a new meet record in the 800 free relay and a new ACC record in the 400 free relay.

Kate Douglass and Alex Walsh led the Cavaliers with three individual wins each. Douglass won the 50 free, 100 fly, and the 100 free, while Walsh won the 200 IM, 200 free, and the 200 breast. But what really sets those two is their incredible versatility — each probably could’ve swum three totally different events and won them all.

The Cavaliers rolled through the first three days, winning every single swimming event. They stumbled a bit Friday, as NC State swept the three individual events, but even then, they capped off Friday’s finals session with the fastest 400 medley relay history by two seconds, and kept that momentum going into Saturday, winning every event except the 1650 free.

Still, it was a team effort, as every single swimmer and diver scored in at least one event. That fact is especially notable this year as it was a fairly close battle against the NC State Wolfpack. The Cavaliers won by 71.5 points in the end, but it remained tight until the last few events, and even a few missed points here and there would’ve kept the Wolfpack in it through the final relay.

Next month, the Cavaliers will seek to take it one step further and defend their NCAA title. They’ve got to be considered the favorite at this point, but it could be a tougher battle than it was last year. NC State, which finished 2nd at NCAAs last year, should make some noise once again, and some of the schools that had depleted rosters last year to due to Covid and/or the Olympics are back to full strength. Still, this is a UVA team that’s been firing on all cylinders the last few years, and they seem to be on track to continue to do so for the foreseeable future.

What about the men???

The Virginia men did not win their third-straight ACC Title.

It looks like the ENTIRE Women’s 200 fly final was never added into the system which effects the final scores for all of the teams. Can someone check this? Congrats to UVA!

It looks like the team scores are correct, based on official results, but Meet Mobile didn’t add the 200 fly points into individual’s tallies. I’ve updated the individual list.

Dude…you are way off on those numbers

Thanks, I was working off of Meet Mobile. Some of the discrpenancies were due to MM not adding in individual 200 fly points. Others just didn’t update. Should be accurate now.

But no ones talking about VTs Emma Atkinson.

From Cavaliers website: “Sophomore Alex Walsh was named the ACC Women’s Most Valuable Swimmer”, deservedly so.

Alex or Kate tough choice. For some reason, some are underestimating Kate’s versatility.

I think Kate just hasn’t raced as many races as Alex has at such a high level to showcase that versatility.