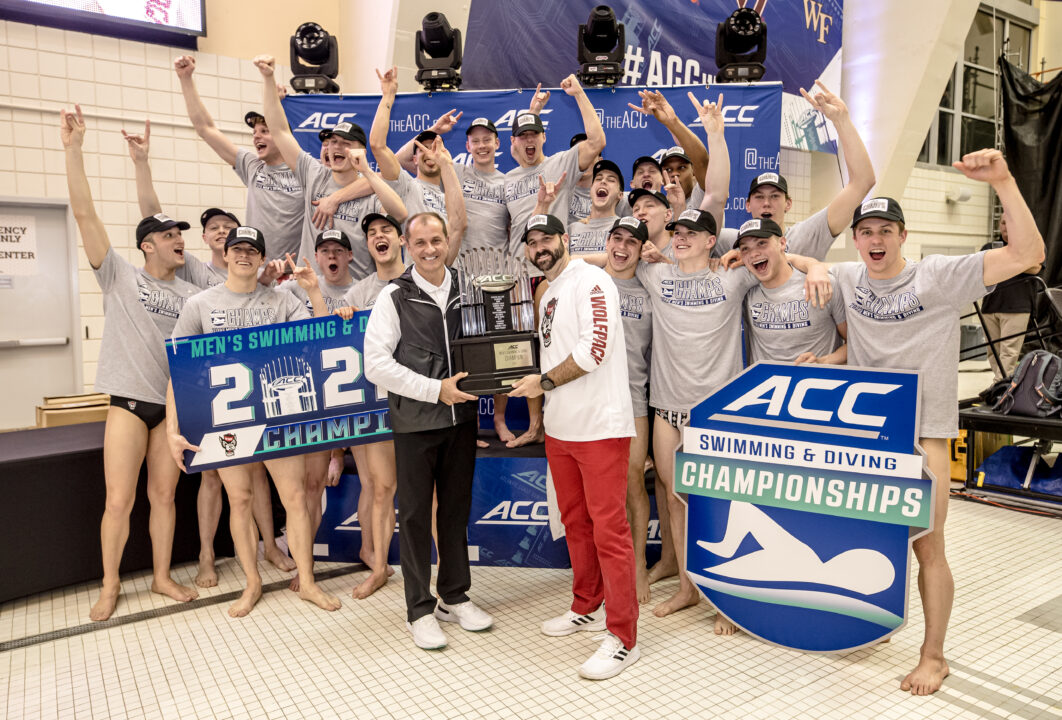 The NC State men reclaimed the ACC title this week by a wide margin after a two-point loss to Louisville last year ended a six-year winning streak. Current photo via The ACC

he NC State men recaptured their ACC championships in dominant fashion this week, winning by a margin of 309 points with a total score of 1501.5. That’s the highest number of points by one team since the ACC expanded scoring in 2014. That passes the previous high of 1457 from 2018. That’s also the 3rd-largest margin of victory in ACC men’s history, surpassed only by NC State’s 362-point victory over Clemson in 1977 and their 334.5-point victory over Louisville in 2016.

NC State was one of the top teams in the conference from 1954-1985, but then only won one other ACC title in the next 30 years. Head coach Braden Holloway took over the NC State program in 2011, and he and his staff have built the Wolfpack into a conference and national powerhouse. The men won six-straight ACC titles from 2015 to 2020, then slipped last year after a medley relay disqualification caused them to lose to Louisville by a scant two points.

That’s nearly double the number of championships of any school. UNC has won 17 times (13 of which have been outright) and UVA has won 16 times.

This year, it was a full-team effort, as every swimmer and diver on the roster scored in at least one event. Junior Hunter Tapp led with 80 individual points after top five finishes in the 200 free, 100 back, and 200 back. Five different men won individual victories, and the Wolfpack won every individual freestyle event except the 100 free.

Next month, the Wolfpack will head to the NCAA Championships. They seem to be a lock to improve on last year’s 8th-place performance there, but they haven’t been able to finish higher than 4th. Despite their great performance this week, they’ll have a tall order to get past Texas, Cal, and Florida, all of whom are also looking incredibly strong this year. Still, given the depth of their current roster, and the incredibly recruiting classes they have coming in, the Wolfpack should continue to be on the risen in the years to come.

Wolfpack looks like a serious top 3 threat now. They don’t quite have the high end scoring to match up with Florida, but the depth they have across all disciplines makes up for that. The Gators are loaded in freestyle but thin across the strokes, whereas this crew from NC State is only hurting in breaststroke, and packs elite relays that can challenge for titles across the board (as long as they can find a remedy for their chronic false start problems). If they can manage to get Norgaard and Ponti to show up they’ll be lethal next year.

Personally I don’t think Cal is as strong this year as they were last year. Retaining key seniors with that… Read more »

NCSU left no doubt this past week. They came back hungry and dominated the ACC this year. Congrats to Braden and his staff on a job well done, and congrats to the swimmers for swimming their hearts out. Truly a great team effort.

Last year the highest scorer for NC State was Erge Gezmis with 71 points. Half of their swimmers this year scored more than him.

This year event winner and phenom David Curtiss, and Polish breastroke superstar Rafal Kusto scored the least amount of points at 43. Last years squad had 7 people score less than that.

Amazing how much a team can improve both top end and depth in the ACC over just a year. Interesting to see how it will translate to NCAA’s

The most dominant sports program in the history of the Atlantic Coast Conference. No other sports team on either female or male side has more conference titles.

Bunch of champions in Raleigh!

Not even close.
Chapel Hill has exponentially more championships than Raleigh.

But @JosephS is correct. For a single sports team, State men’s swimming has more ACC Championships than even Anson’s dominant women’s soccer team because there haven’t even been 30 ACC Women’s Soccer Championships.