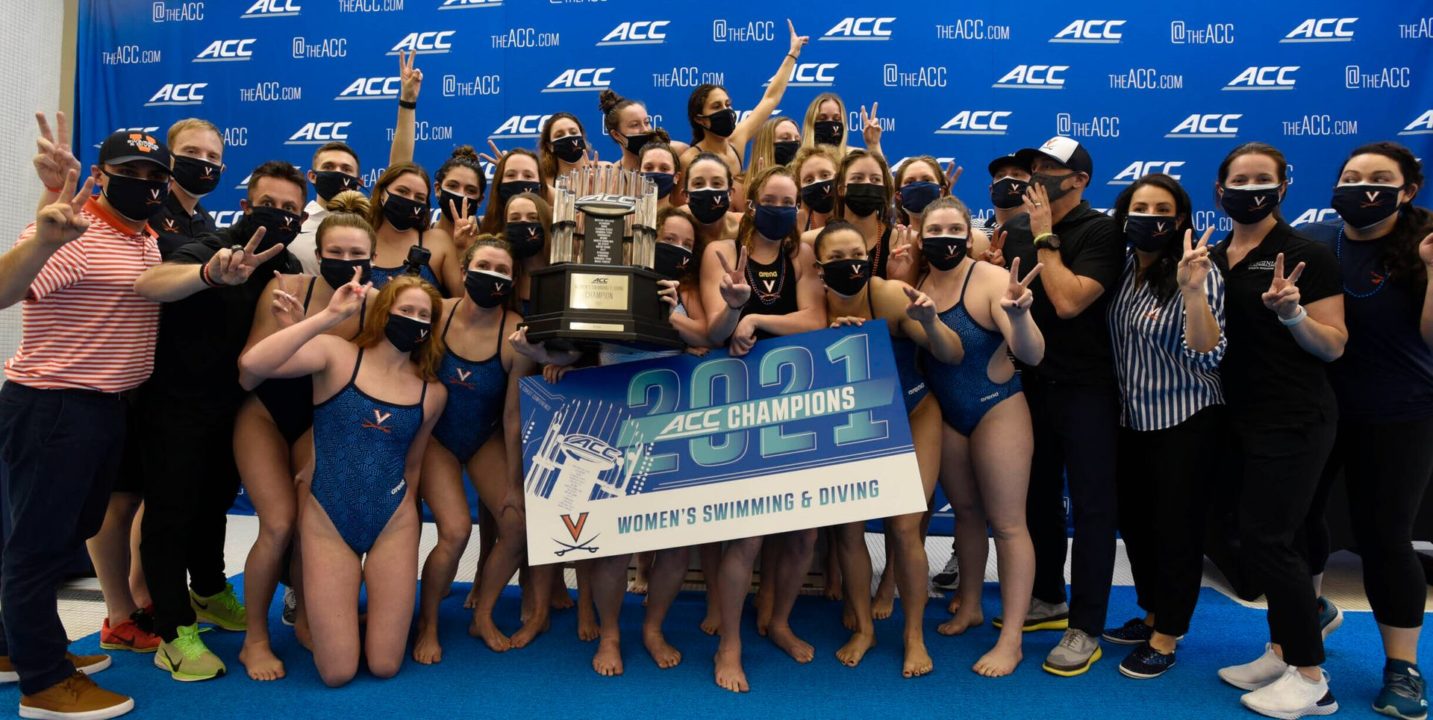 The Virginia Cavaliers have a star-studded roster, but don't expect the NC State Wolfpack to let UVA to earn a third-straight title without a fight. Archive photo via Virginia Athletics Media Relations

Last season, the Virginia women stormed to their second-straight ACC title en route to winning their first-ever NCAA championship. They’ve lost Paige Madden, who won three individual NCAA titles, to graduation, but they have plenty more in the tank. They bring back stars like Kate Douglass and Alex Walsh, and have added Gretchen Walsh and Emma Weyant. All except Gretchen won IM medals at the Olympic Games this last summer. Barring disaster, this should be the Cavaliers’ meet to lose.

If any team has a chance of upsetting the defending champions, it’s going to be the NC State Wolfpack, who last won the title in 2019, but who took 2nd both here and at NCAAs last season. They’ve got top-end stars like Sophie Hansson, who swept the breaststrokes at NCAAs, and they have plenty of depth too, as evidenced by the fact that they beat UVA in the 200 medley relay at NCAAs.

While Louisville doesn’t have the star power they used to, the Cardinals have looked strong so far this season, as evidenced by freshman Rye Ulett arriving on campus a semester earlier than expected and promptly breaking a school record in the 200 back.

A couple of seasons ago, the Virginia Tech Hokie women’s performance at ACCs signaled the beginning of a new era under head coach Sergio Lopez. While the men have since eclipsed them in terms of both ACC and NCAA finishes, this is still a well-rounded team that could be sneaky-good this week.

The UNC Tar Heels may be swimming with a bit of a chip on their collective shoulders this season after racing depleted, due to COVID, at last year’s ACCs. But then-freshman Aranza Vazquez was a bright spot last year, winning the 3m and platform diving events, and taking 2nd in the 1m.

It’s been a fairly quiet season for the rest of the conference. But most of the teams are getting a boost in the form of returning 5th years, and that, coupled with a new, combined-gender, five-day format, should provide plenty of excitement for all teams this week in Atlanta.

NC State – Kylee Alons (senior; free, back, fly), Katharine Berkoff (junior; back, free, IM), Sophie Hansson (senior; breast, free, IM), Kate Moore (senior; free, back, IM), Emma Muzzy (senior; back, IM), Julia Poole (fifth year; IM, breast, free) – Alons was the Wolfpack’s top scorer last season, including a win in the 50 free. Berkoff won the 100 back, and holds the #1 seed in that event and the #2 seed in the 200 back. Hansson swept the breaststrokes last season, and holds the #1 seed in the 100 and #2 in the 200. Muzzy, Moore, and Poole are all versatile threats who each made three A-finals last season.

Louisville – Gabi Albiero (sophomore; sprint free, fly), Abigail Hay (junior; IM, fly), Alena Kraus (senior; free, fly, IM), Tristen Ulett (sophomore; fly, back, free), Rye Ulett (freshman; back)  – Hay was the Cardinals’ leading scorer with three A-finals last season, followed closely by Albiero, who, like Tristen Ulett and Kraus, made a pair of A-finalist and one B-final.  Rye Ulett set a school record in the 200 back shortly after joining the squad this semester, while Williams tops the 500 free psych sheet this season after taking 9th in that event and 2nd in the 1650 last year.

Virginia Tech –  Reka Gyorgy (senior; free, IM, fly), Chase Travis (junior; free), Caroline Bentz (sophomore; back, free, IM), Emma Atkinson (sophomore; back, free, fly), Sarah Shackelford (junior; free)  – Gyorgy returns for a fifth year after finishing in the top five in three events last season. Atkinson finished 4th in both backstrokes last season, and looked quite sharp at the recent Hokie Invite. Bentz finished either 8th or 9th in three events in 2021, while Shackelford took 3rd in the 100 free last year, and Travis should compete for a top-eight finish in both the 500 and the 1650.

UNC – Grace Countie (senior; free, back),  Sophie Lindner (senior; free, fly, back), Aranza Vazquez (sophomore, diving) – Vazquez nearly swept the diving events last year as a freshman, and the UNC diving corps should provide a big boost once again. Countie is seeded to once again finish in the top six in the 50 free, 100 back, and 100 free. Lindner didn’t compete at ACCs last season, but made the B-final in both backstroke events at NCAAs.

Notre Dame – Kelly Straub (senior; diving), Coleen Gillilan (junior; fly, breast, IM),  Luciana Thomas (junior; free, fly, IM) – Straub is seeded in the top four in all three diving events after netting 78 points last season.  Thomas is the leading swim returner from last year after making A-finals in the 500 free, 400 IM, and 200 fly. Gillilan hasn’t quite generated the in-season headlines she has in previous seasons, but should still be a weapon in the fly events and the 200 IM.

Florida State – Phoebe Griffiths (sophomore; free), Tani Quagliero (junior; back, free), Rebecca Moynihan (fifth year; free), Nina Kucheran (senior; breast, IM) – Griffiths led the team in points last year as a freshman, thanks to a 7th-place finish in the 200 free and B-final appearances in the distance events. Quaglieri and Moynihan should add additional points this year in they each actually swim in the 50 free. Kucheran is seeded to make the A-finals in both breastrokes and the B-final of the 200 IM after being absent last year.

Duke – Yixuan Chang (freshman; distance free), Aliyah Watson (junior; diving), Sarah Foley (sophomore; IM, fly) – Chang should haul in some points in the distance events; she seeded 7th in the 500 free. Watson led the Blue Devils in scoring last year, including a runner-up effort in the platform diving event. Foley was Duke’s best swimmer in 2021 with an A-final appearance in the 200 breast and 10th-place efforts in the 200 IM and 100 breast.

Miami – Adrianna Cera (sophomore, distance free), Mia Vallee (junior; diving) – Vallee led the Hurricanes with 60 points last season, despite only competing in two events, but that’s what a 1st place finish in the 1m and a 2nd place in the 3m will do for you. Cera picked up points in both distance freestyle events last season, and should do so again.

Pittsburgh –  Jacqueline Tinneny (junior; free, IM), Amy Read (junior; diving) – Read is the only returning Panther to finish in the top 8 in any event, thanks to a 6th-place finish in the platform. Tinneny is seeded to score again in the 1650 after finishing 10th last season.

Boston College – Olivia Poulin (junior; diving), Haley Dolan (senior; free, back), Megan Kramer (freshman; distance free) – The only two individual scorers for the Eagles last year, Poulin finished 12th in the 1m and Dolan finished 22nd in 50 free. Kramer, meanwhile, is seeded to score in the 500 and the 1650.

Part of the drama in this event comes from not knowing whether or not Kate Douglass will actually swim this event. She’s now the 2nd-fastest performer ever, but this is one of UVA’s deeper events, and she may opt for the 100 free instead. If she does stick with this, however, she’ll square off against a field that includes NC State’s Sophie Hansson. The two have traded the conference in this event a few times now, and if we do get to see both of them swim it, there’s a good chance that mark could go down again.

Last year, UVA won this event at ACCs with the fastest time ever. However, the Cavaliers couldn’t quite match their own time at NCAAs, and NC State came out on top there. Virginia has gotten a big boost this year with Gretchen Walsh on backstroke, and if UVA goes with its optimal lineup for this event, the U.S. Open Record should be in danger again. But, expect NC State to at least push Virginia in what should be a short thrilling race.

There’s no clear front-runner here after the top finishers from last season graduated. NC State fifth-year Julia Poole took 3rd last year, but is only seeded 23rd this season, and there are several women who have already been faster than her finals time from last season. Louisville’s Paige Hetrick and NC State’s Annabel Crush top the psych sheet with identical times of 1:45..00, while another Cardinal, Arina Openysheva (1:45.21), and another Wolfpack swimmer, Abbey Webb (1:45.36).

The Swimulator (and past results) indicate that there is a big gulf between the top three teams and everyone else. It’s easy to assume that the Cavaliers will win this going away, but the Wolfpack should at the very least keep up the pressure throughout the meet. Louisville looks to be pretty solidly in third at this point. This sets up what could be a very exciting battle for 4th place between Notre Dame, Virginia Tech, Florida State, and UNC. Diving should play a big role in sorting out the final finish for those four teams, so keep an eye on the boards.

“Minor medals” wtf is that?

Streaming on standby for anyone else?

Figuring out how to watch upcoming championships is a challenge on its own. I subscribe to YouTube TV that includes ACC Network. Unfortunately the ACC swimming championship will not be broadcast live via ACCN channel available on YouTube TV. I can only hope I will be able to watch competition by clicking the streaming links posted above in the article but I will not know if the login credentials will be needed until the broadcast starts.

I also have YouTubeTV and you should be able to log into your YouTubetv account on espn and stream!

That’s the key. Go to espn3.com from computer or ESPN app on mobile or roku etc. click watch and then select the meet. it may take you to authenticate with your service provider’s login page, whether YoutubeTV, Hulu, Comcast, Spectrum, or whatever. It worked fine this moving for diving.

Under stars you are forgetting Alexis Wenger for UVA and Heather MacCausland for NC State.

As usual UVA doesn’t have an 800 free relay time for this year, so that’s 64 points missing from their swimulator score.

Wrong. They are seeded 2nd with their aggregate 200 Free individual top times. Not 64 points missing.