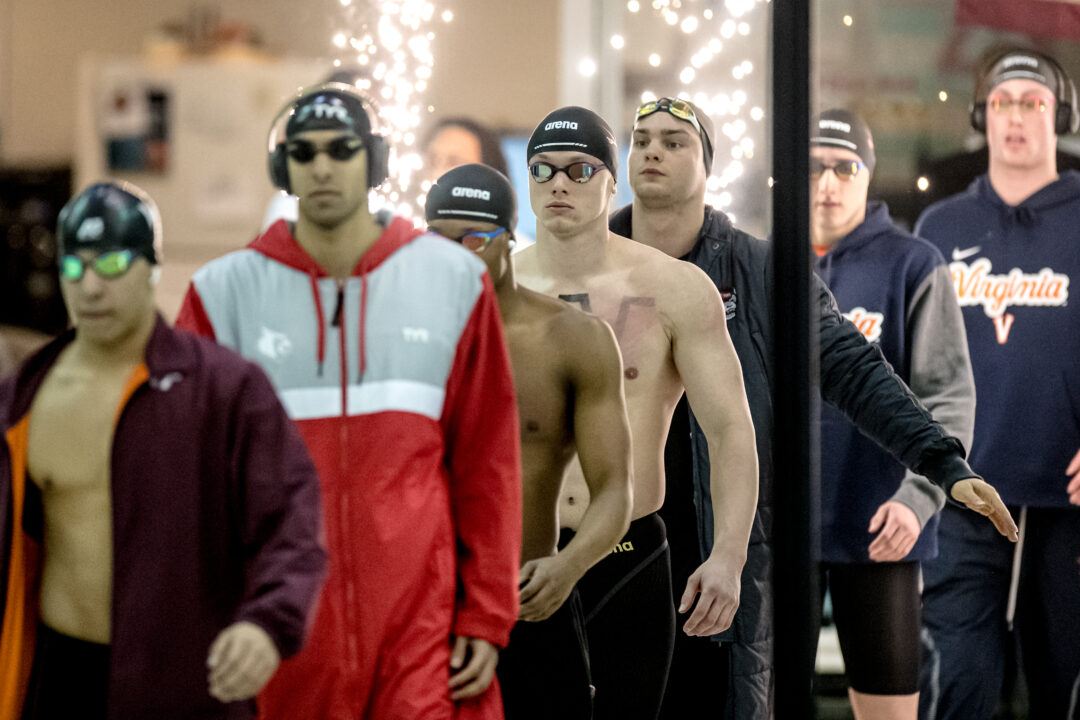 The NC State men put up over 1500 points to regain the ACC trophy, but they were far from the only team that impressed this past week in Atlanta. Current photo via Matt Riley – UVA Communications

Hey, we get it. Life gets busy, and not everyone has the time or devotion to do a deep dive on every single conference meet. So, we’re here to provide with you bite-sized overviews of the major conference meets from last week.

This year was unusual in that the ACC men and women competed together, instead of over two separate weeks, but we’ll break down the two meets separately.

The Wolfpack bookended the meet with victories in the 800 and 400 free relays, and they dominated through the week with a mix of top-ended talent and depth.

Louisville took 2nd to NC State, but they actually scored more points (1192.5) than they did when they won last year (1181). The Cardinals lowered the ACC record in the 200 medley relay 1:21.84,  faster than they swam to win this event last year at NCAAs, helped this week in part by a historic 19.50 fly split by Dalton Lowe.

The NCAA granted an extra year of eligibility to athletes who competed last year, and Cardinal fifth-years Nick Albiero and Evgenii Somov took advantage of that by winning their unprecedented fifth-straight titles in the 200 fly (1:37.92, #2 all-time) and the 100 breast, respectively. Fellow fifth-year Daniel Sos added a win in the 400 IM.

Continuing their rapid improvement under Sergio Lopez, the Virginia Tech Hokies actually tied NC State for the most individual event wins. Youssef Ramadan won the 100 fly and the 100 free, becoming the 4th-fastest ever in the 100 fly with a 44.08.  Carles Coll Marti took the 200 IM and the 200 breast and fifth-year Samuel Törnqvist won the 200 back.

The University of Virginia Cavaliers looked like they were going to be dangerous in the sprint freestyles, but they may have surprised even their own coach staff by breaking the American Record in the 200 free relay with a 1:14.47. That could be just the beginning for the Cavaliers, as three of the four men on that relay were underclassmen (and UVA had enough depth to leave a 19.1 freshman, Jack Aikins, on the bench)

We’re trying to keep this relatively short, but the entire ACC is getting faster and deeper, as numerous school records went down, and the times compared very favorably to, and in some cases were markedly faster than, the SEC Championships, which were held at the same time.

We’re trying to keep this relatively short, but the entire ACC is getting faster and deeper, as numerous school records went down, and the times compared very favorably to, and in some cases were markedly faster than, the SEC Championships, which were held at the same time.

I’m no english professor, but this has gotta be a run on sentence…no? If I’m wrong definitely ignore me. peanut gallery etc

I will admit that it is lengthy, but I think I used enough commas and conjunctions that it’s technically not a run-on sentence. Too many years of grad school leads to writing 50-word sentences that are actually grammatically correct.

Continuing their rapid improvement under Sergio Lopez, the Virginia Tech Hokies actually tied NC State for the most individual events.

Where is Jay Baker for UNC?

connor boyle a legend for going 41 with no underwaters

And freshman Arsenio Bustos broke the NC State school record in the 200 breaststroke from the B final. The hyped State freshmen class got off to a good start in their first big meet. They’re all either still 18 or 19 so look to have bright futures. They also don’t have all the immediate pressure on them with the stud sophomore and Junior classes and senior/5Y leadership. Present is bright and next year is scary.