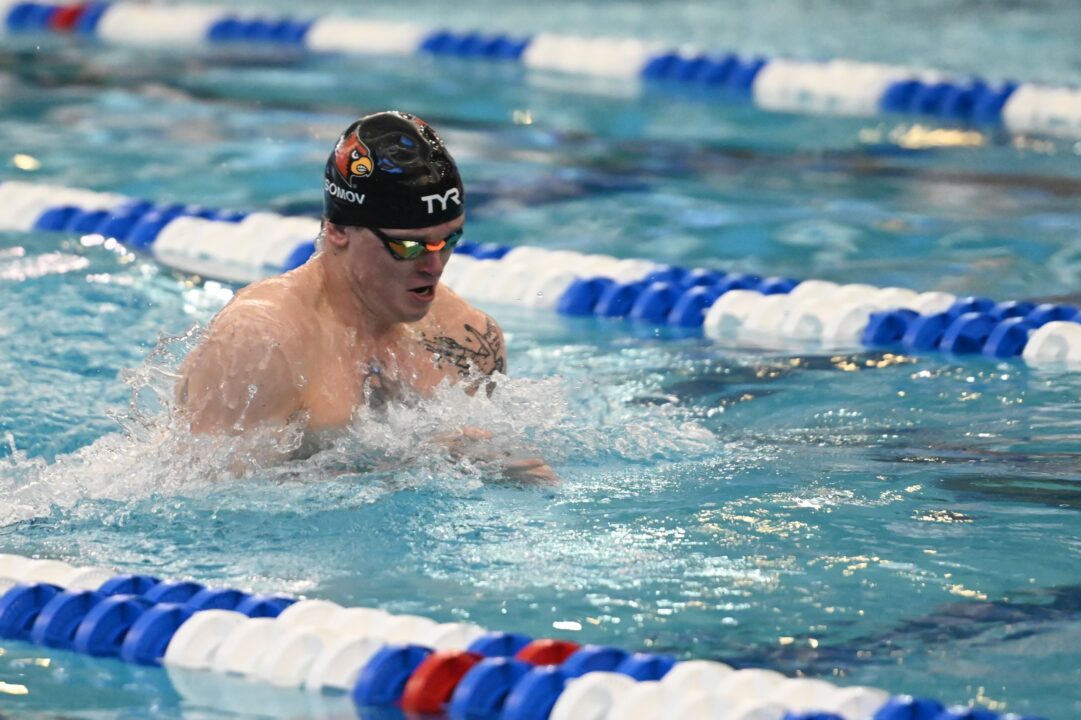 Louisville's Evgenii Somov and Nick Albiero will each be swimming for a fifth-straight ACC title in their respective individual events today. Archive photo via NCAA Photos

After Alex Walsh scratched the 200 fly, her UVA teammate Abby Harter holds the top seed in the 200 fly. On the men’s side Georgia Tech’s Christian Ferraro tops the psych sheet, but watch for Virginia Tech’s Antani Ivanov and four-time defending champion Nick Albiero of Louisville, among others, to make some noise this morning.

The women’s 100 back promises to be an all-time great race between the top-seeded Katharine Berkoff of NC State and UVA’s Gretchen Walsh, although we probably won’t see the real fireworks until tonight. Meanwhile, Kacper Stokowski is the only man in the conference who’s been under 45 this season, and he’ll be swimming to defending his title.

After Walsh and Kate Douglass scratched out of the 100 breast today, watch for NC State to haul in some big points in that event, led by conference record holder Sophie Hansson, who’s won this event the last three years. Pitt’s Cooper Van Der Laan has the fastest time 100 breast time in the conference so far this season, but he’ll face stiff competition that includes Louisville’s Evgenii Somov, who like his teammate Albiero, has won this event the last four years.

The fastest two times the morning came from heat three, where Louisville’s Abby Hay posted a 1:54.43, the fastest time of the morning by over half a second. Touching behind her in that heat was Notre Dame’s Colleen Gillilan, who nearly got under 1:55 with a 1:55.02.

In the next heat, the last one, defending champion Jessica Nava of Virginia led for most of the race before ceding the lead to NC State’s Abby Arens on the final few strokes. Arens touched in 1:55.23, and Nava in 1:55.44. Each of those two women had a teammate in that heat join them in the top eight overall: Virginia’s Abby Harter (1:55.75) and NC State’s Grace Sheble (1:55.92).

Tristen Ulett of Louisville was the 4th-fastest performer this morning with a 1:55.32, and FSU’s Edith Jernstedt just made it into the top eight with a 1:56.42.

Nick Albiero wasn’t messing around this morning in his quest for an unprecedented fifth ACC title in this event. The fifth-year Cardinal stormed from start to finish, posting the fastest time of the morning by the better part of three seconds, and registering what appear to be the fastest time in the NCAA this season with a 1:39.53.

But it wasn’t just Albiero swimming fast this morning. This event took a huge leap forward in terms of what it took to make the A-final. Last year it took a 1:44.24 to make the top eight; this morning you needed a 1:42.99.

Georgia Tech’s Christian Ferraro (1:42.37) and Virginia’s Josh Fong (1:42.57) will also return from last year’s A-final, with Fong possibly having earned his first NCAA invite with that swim. That’s a lifetime best by over a second for Fong, whose older brother Zach was a fixture in this event for UVA. Likewise, Notre Dame’s Zachary Smith, who moved up from the B-final last year to the A-final today, was about half a second under last year’s invite time with his 1:42.99.

NC State’s Katharine Berkoff, the fastest ACC swimmer ever in this event, holds the top seed after posting the fastest time of the morning by nearly a second, with a 50.54. She’ll be joined in the A-final by teammate Kylee Alons, who had the 5th-fastest Wim with a 51.83.

UVA also put two women into the A-final: Reilly Tiltmann (51.41) and Gretchen Walsh (51.53). Walsh swam the fastest 50 back ever yesterday, and appeared to be taking it fairly easy this morning, although she may have slipped on the start.

The UNC Tar Heels actually had most women in the top eight, with Grace Countie (51.54), Greer Pattison (52.05) and Sophie Lindner (52.36) all qualifying. Virginia Tech’s Emma Atkinson (52.36) tied with Lindner to round out the top eight.

Louisville’s Mitchell Whyte lead the prelims with a 45.41. He finished 3rd in this event last year. Last year’s champion, NC State’s Kacper Stokowski, qualified 2nd in 45.74, and he appeared to really shut it down the final few strokes, so look for him to go well under 45 tonight.

Each of those men will be joined by one teammate in tonight’s A-final. Hunter Tapp qualified for the Wolfpack with a 45.97, and Louisville’s Nikolaos Sofianidis will return to the A-final after just making it in with a 46.05.

UVA’s Matt Brownstead qualified 3rd with a 45.83, setting a a new personal best.

Florida State’s Mason Herbert also returns to the A-final after qualifying in 46.02.

After knocking about half a second off of his lifetime best in the 50 free Wednesday, it was a little surprising to see UVA freshman Jack Aikins, one of the best high school backstrokers ever, miss the A-final. His time of 46.63 this morning is his 2nd-fastest time ever and got him into the B-fial, so it’ll be interested to see if he can near or surpass his lifetime best of 46.05 tonight.

We see the top-end swimmers at conference meets save their best for finals, but UVA’s Alexis Wenger didn’t mess around this morning, throwing down a meet and overall conference record with a time of 57.22. Her teammate Anna Keating will join her in tonight’s A-final after going 59.89 in prelims.

NC State one-upped Virginia, taking three of the top eight spots out of prelims. The Wolfpack will be led by the now-former conference record holder, Sophie Hansson. The senior has won this event the last three years, and don’t be surprised if it takes another conference record to win tonight, whether that comes from Wenger or Hansson.

Hansson’s teammates Andrea Podmanikova (58.98) and Heather McCausland (59.15) posted the 3rd and 4th-fastest times of the morning, as the Wolfpack continues to pile up A-final swims as they try to narrow the gap agains the first-place Cavaliers. Podmanikova took 3rd behind Hansson and Wenger last year, while McCausland won the B-final.

Louisville also got multiple swimmers into the top eight, thanks to Mariia Astashkina (59.77) and Adeline Farrington (1:00.02).

Florida State’s Nina Kucheran rounds out the top eight after qualifying 5th with a 59.34.

Like his teammate Albiero, Louisville’s Evgenii Somov apparently didn’t want to take any chances making sure he secured a spot in tonight’s A-final as he shoots for a 5th title in this event. Instead, he blasted a 51.39 that’s not to far off of his conference record in the event.

Louisville freshman Denis Petrashov will join his teammate Somov in the A-final after going 52.30. Virginia Tech’s Carles Coll Marti, who’s been on fire this week, moves up from the B-final last year to the A-final with a prelims time of 52.48. Pitt’s Flynn Crisci just made the top eight with a 52.68.

Finally, something for the Pitt Alums to cheer about.

wish we got to see a sprint breast out of Douglass, with how good her 200 breast and sprint free has been lately

of course, she’s accomplished so much in SCY swimming that she really has no need to do spring breaststroke as well, I just have to think that she’d be an elite sprint breaststroker as well, given how good she is at middle distance breaststroke and sprint free/fly

Wondering if we’ll get a repeat of last year in the 100 breast. Wenger set the ACC record in prelims, only for Hansson to break it in finals. Either way, expecting a crazy fast time tonight

has anyone other than Lilly King ever broken 57.0 for 100 breast? Looks like it could take a sub 57.0 to win tonight. Wenger is on fire and Hansson has proven herself a racer, so I’d bet we see at least one sub 58 tonight.

Lilly and Molly Hannis are the only ones:

NC STATE women keeping it closer than I thought

UVA women have 2 or 3 more swims than NCSU tomorrow

the swimming geek in me, who likes stats got intrigued by this. So I have gone through and counted up how many individual swims have been used thus far.

with NCState having 14 swims left, to UVAs 16, and LOU with 16 swims…
it will truly be a battle of which team can get more of their swimmers to move up/maintain placements tonight and then to place high enough for a final tomorrow. NCState having the Mile helps them out. UVA does have… Read more »

I may be wrong, but I’m pretty sure UVA only took 17 swimmers, and brought 4 divers. So they would have 3 less swims left.

on meet mobile they have 18 swimmers, and 3 divers. all but one of their swimmers have scored at ACCs with it being Anna Keating who is ranked 7th in the 100 breast tonight.

UVAs studs all have another swim tomorrow. Alons and Shelbe are done for Ncsu tonight.

also means they will be rested for 4×100 tomorrow

I know! She did it without lifting her arms out of the water!

Katherine Berkoff’s 23.1 relay leadoff was somewhat overlooked in all the excitement about Gretchen Walsh’s 22.8, but it bodes well for her 100 back tonight. (As did her 21.69 in the 50 free, as a sort-of-non-freestyler.) Walsh is on fire at the moment, so may be the slight favorite tonight, but Berkoff isn’t about to roll over and play dead.