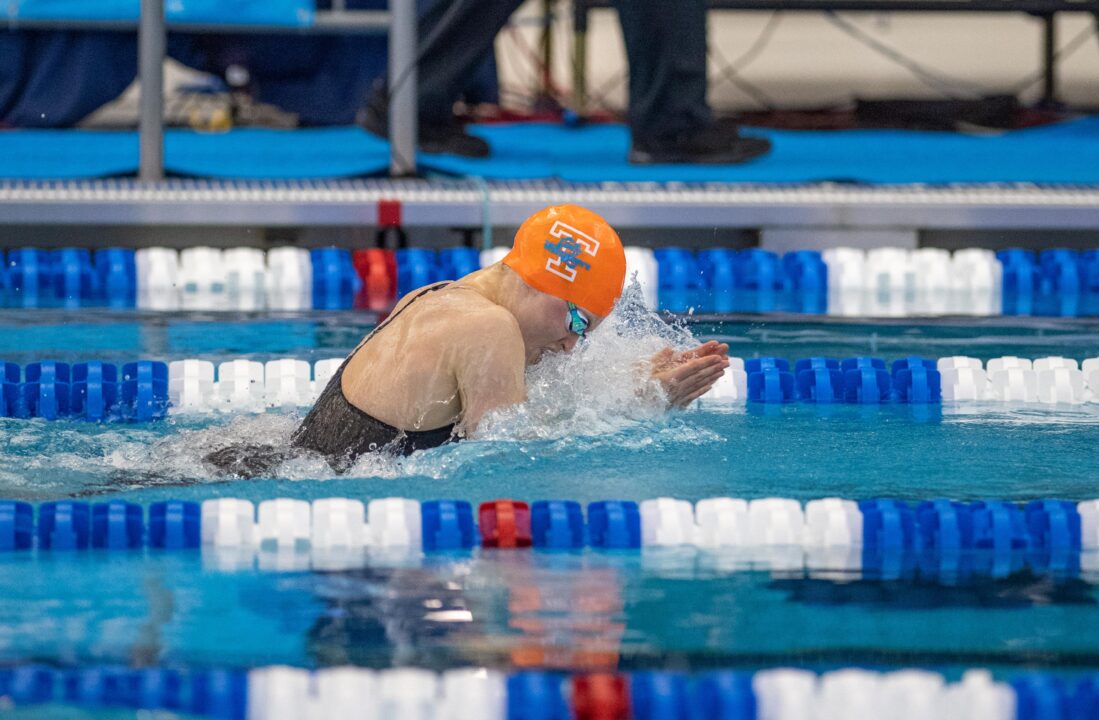 Tennessee's Mona McSharry comes in with the fastest 100 breast in the NCAA this season as the Lady Vols look to continue to roll in Knoxville. Current photo via Jack Spitser/Spitser Photography

Alabama’s Rhyan White comes in as the favorite in the women’s 200 back as Alabama battles with Georgia and Kentucky for a likely second place team finish.

Jordan Crooks swam a time of 41.64 in the 100 free to finish second at SECs, becoming the fourth-fastest freshman in NCAA history.

The fourth of five days of racing for the SEC Championships kicks off this morning in Knoxville, Tennessee. Just past the halfway point in the meet, the host Tennessee Lady Volunteers hold a commanding lead in the women’s meet, while the University of Florida men have a firm grasp on the men’s championship lead. This morning’s prelim session will include the 200 fly, 100 back, 100 breast and men’s platform diving. Racing gets under way at 9:30 AM EST.

While Tennessee’s Ellen Walshe originally held the top seed in the 200 fly, she has exhausted all of her individual races after winning titles in the 200 IM, 400 IM and 100 fly over the last two days and scratched. That leaves Georgia senior Dakota Luther as the top seed, with Kentucky’s Riley Gaines, who won the 200 free last night, close behind. Missouri senior Danny Kovac holds the top seed in the 200 fly, but all eyes will be on Georgia sophomore Luca Urlando, who went a lifetime best last night in the 100 fly and now lines up as the second seed in his signature 200 fly.

Alabama’s Rhyan White, who was a member of the US Olympic team and won a silver medal in the 4×100 medley relay in Tokyo, headlines the women’s 100 back and is the top seed by over a second and a half. Her Crimson Tide teammate, junior Matthew Menke, holds the top seed in the men’s 100 back, with Florida’s Adam Chaney and Auburn’s Nate Stoffle seeded less than four tenths back.

Tennessee sophomore Mona McSharry leads the psych sheets in the 100 breast with her 57.46, the current top time in the NCAA. Alabama’s Avery Wiseman is close behind, however, with her 57.79 that currently sits 3rd in the nation this year. Auburn sophomore Reid Mikuta comes in as the top seed in the men’s 100 breast with his 51.33, though Alabama junior Derek Maas and Missouri junior Ben Patton are in hot pursuit, with all three men swimming under the NCAA A cut already this season.

Georgia senior and top seed Dakota Luther took care of business this morning, winning the final heat by two and a half seconds on her way to taking the top seed in 1:53.83. Her senior teammate Callie Dickinson finished second in the final heat with a new season best of 1:56.32 to qualify 6th for tonight’s final.

The Tennessee Lady Vols continued their impressive meet, putting two freshmen in the A final. Sarah Stotler dropped 6 tenths from her seed to qualify second in 1:54.60, now the 15th fastest time in the NCAA this year. Her classmate Summer Smith dropped over a second and a half from her seed to move up from 11th to 5th, with a 1:56.20.

Second seed Riley Gaines of Kentucky, last night’s 200 free champion, won her prelim heat with a 1:54.69, a small drop from her seed time to qualify third.

Auburn freshman Avery Bargeron qualified fourth with a 1:55.71. South Carolina sophomore Melinda Novoszath dropped over two seconds from her seed to qualify seventh in 1:56.60, while Florida sophomore Amanda Ray snuck into the A final by a tenth, qualifying 8th in 1:57.17.

Georgia’s Luca Urlando, fresh off his 100 fly victory last night, qualified first in 1:40.14, sneaking under the NCAA A cut for the first time this season and becoming the top time in the country this year. His freshman teammate, Matt Sates, will also swim in the A final after putting up a quick 1:41.91 in the first heat, good for the 3rd seed tonight. A third Bulldog, senior Andrew Abruzzo, will also compete in the A final after qualifying 6th in 1:42.97.

Kentucky’s Mason Wilby dropped 1.2 seconds from his seed to to qualify second in 1:41.08, a time that now puts him top 10 in the NCAA this season. Top seed Danny Kovac of Missouri was the only swimmer to make the A final who was off of his seed, qualifying fourth in 1:41.97, a 1.1 second add.

Florida, Tennessee and Auburn will each have one swimmer in the A final tonight. gator sophomore Jace Crawford qualified 5th in 1:42.57, while Tennessee senior Kayky Mota dropped nearly two seconds from his seed to qualify 7th in 1:43.83. Alabama freshman Charlie Hawke rounds out the A final after qualifying 8th in 1:43.88.

As expected, Alabama senior Rhyan White cruised to the top seed this morning, winning the final heat in 51.08, nearly a full second off of her season best of 50.15, which currently sits second in the NCAA this season.

Missouri senior Sarah Thompson will swim in her third A final of the meet after qualifying second in 51.65, just hundredths off her season best. Her junior teammate Meredith Rees will join her in the A final after qualifying fourth in 51.86.

Kentucky will also have a pair of swimmers in the A final tonight, with junior Caitlin Brooks qualifying in third in 51.73 and senior Sophie Sorenson qualifying 7th in 52.55. Both swims were season bests for the Wildcats.

Auburn sophomore Meghan Lee had the swim of the morning, dropping 1.2 seconds from her seed to qualify fifth in 52.30 and likely qualify her for NCAAs. Tennessee freshman Josephine Fuller qualified 6th in 52.32, adding a tenth from her seed, while Arkansas senior Andrea Sansores finished 8th by just .01 in 52.71.

Florida’s Adam Chaney put up a dominant swim in the 100 back this morning, qualifying in first by nearly three quarters of a second in 44.91. That is nearly a full second drop from his seed and less than 2 tenths off of his lifetime best from last year’s NCAAs.

Auburn freshman Nathaniel Stoffle also impressed, qualifying second in 45.74 after dropping 2 tenths from his seed. His junior teammate Lleyton Smith will join him tonight in the A final after qualifying 4th in 46.00.

Another freshman, South Carolina’s Michael Laitarovsky, will also swim in tonight’s A final. Laitarovsky dropped over a half second from his seed time to qualify 6th in 46.17.

The big drop of the morning came from Tennessee’s Bjoern Kammann, who dropped 1.7 seconds from his seed to qualify 7th in 46.31.  Rounding out the A final is Missouri senior Jack Dahlgren, who touched in 46.33, just .01 ahead Auburn’s Aidan Stoffle, who qualified 9th in 46.34

Tennessee’s Mona McSharry, who currently holds the NCAAs top time this season, easily qualified 1st this morning in 57.79, nearly 1.3 seconds ahead of the field. McSharry’s season best stands at 57.46 from the Tennessee Invite.

Qualifying second was Georgia junior Zoie Hartman, who dropped a quarter of a second from her seed to touch in 59.07. She will be joined in the A final by her freshman teammate Angharad Evans, who dipped under 1:00 for the first time this year to qualify 8th in 59.88.

Alabama will also have two swimmers in tonight’s A final. Sophomore Diana Petkova had a massive 3.8 second drop from her seed, winning her heat in 59.13 to qualify third. Bama freshman Avery Wiseman, who came in as the second seed, was 1.8 seconds off of her seed, though was still able to qualify 7th for tonight.

Texas A&M sophomore Bobbi Kennett also put up a significant drop this morning, slicing over two seconds of off her seed to qualify 4th in 59.23. Arkansas will also have a representative in the A final, with senior Vanessa Hermann qualifying 5th in 59.37, nearly 2 tenths slower than he season best. Kentucky’s Bailey Bonnett will compete in the A final for the Wildcats after qualifying 6th in 59.40.

Second seed Derek Maas took care of business this morning, winning the second to last heat in 51.35, .03 faster than his seed to be the top qualifier for the morning.

Coming in just behind him was Tennessee senior Jarel Dillard, who final the final heat in a new lifetime best of 51.38, to take the second seed. Two more of his Volunteer teammates will join him tonight in the A final, with senior classmate Michael Houlie qualifying 4th in 52.07 and junior Brett Champlin qualifying 7th in 52.46. All three Volunteers dropped from their seed.

Top seed Reid Mikuta of Auburn finished second behind Dillard in heat 4 and will swim in lane three this evening after touching in 51.59, a quarter second off of his seed. This seed Ben Patton of Missouri was also off of his seed time this morning, qualifying 5th in 52.25.

Texas A&M junior Andres Puente Bustamante dropped over a full second from his seed to qualifying 6th in 52.31, while LSU sophomore Mitch Mason dropped 9 tenths to slide into 8th in 52.51.

Im happy to see Luca getting back to his best. He has the most potential in LCM 200 fly for USA.

7 guys 18.8 or faster, Brownstead did it leading off the relay for UVA

on paper…definitely. But when guys who churn-it are assembled in the same heat, that wake gets nasty.

Like if you think the pool is colder than 79 degrees

400 medley should be fun! Gotta give the edge to Tenn after this morning.

Yeah, but I think he’s 51 in LCM. He probably hasn’t taken the 2 fly super seriously before.

Plus, he’s obviously got endurance given his 500 fr.

Soooo impressed with these LV freshmen! I think more than half of our A final appearances have been by a freshman. And Kate McCarville has been a workhorse w/ 3 B finals.

Bummer to start the morning with first and second alternates in both the women’s and men’s 2FL.