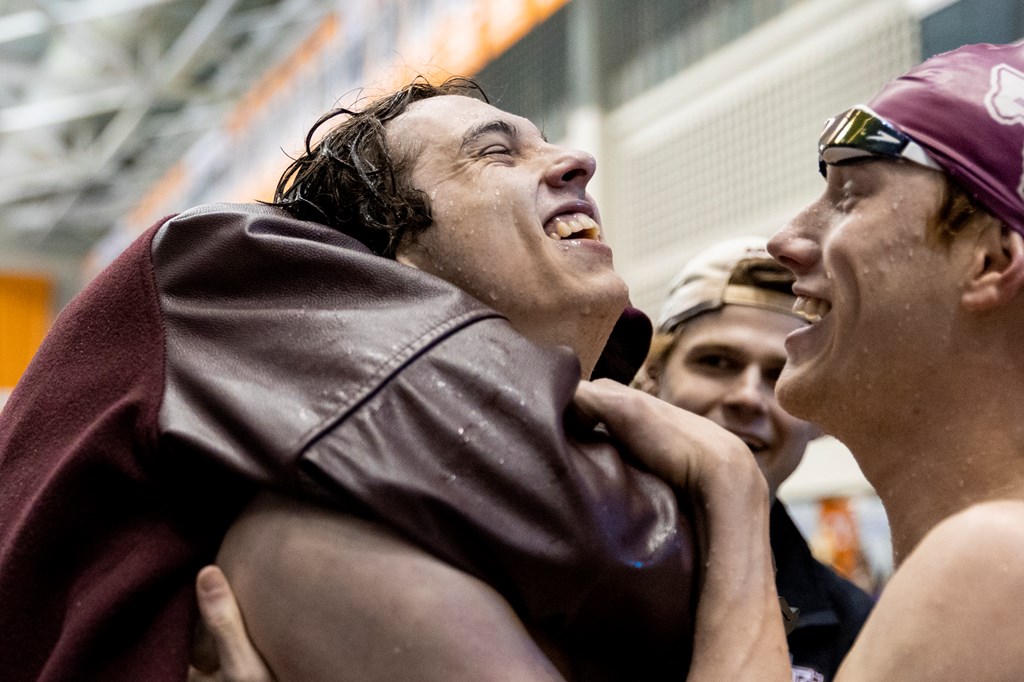 After being 9th at 2019 SECs in the 200 back right after his cancer diagnosis, Ethan Gogulski's story came full circle when he was second in the event today. Current photo via Texas A&M Athletics

Alabama’s Rhyan White comes in as the favorite in the women’s 200 back as Alabama battles with Georgia and Kentucky for a likely second place team finish.

Texas A&M junior Ethan Gogulski‘s first SEC Championship meet in 2019 was one of the most stressful times of his life. That year, he found out he had testicular cancer right before SECs. He swam anyway, finishing the 200 back in 9th place in a time of 1:41.35.

He took a redshirt season in 2019-2020 and returned to the SEC Championships three years after his diagnoses this week.

Gogulski made up for lost time in a big way: he finished 2nd at the 2022 SEC Championships in the same event, swimming a time of 1:39,58 that was almost two seconds faster than his freshman time.

After his diagnosis, Gogulski’s doctor recommended that he go through the surgery to remove his tumor immediately and swim at SECs afterward, but Gogulski decided against it knowing that surgery would be painful and hurt his performance.

“I would’ve been happy with my performance either way,” Gogulski following his SECs performance in 2019. “I dropped a lot of time this season, I was really happy with everything. But having the diagnosis 2 weeks before the meet and still being able to go and drop time…it was a cool thing and felt really good to know that I could overcome that emotionally.”

He was part of a team effort for A&M this week that saw them finish with more points than they scored at last year’s SEC Championship meet in spite of their top scorer Shaine Casas going pro and their #3 scorer Mark Theall graduating.

Tonight was a full-circle moment for him, as he is not only cancer-free, but he also has an SEC silver medal to his name. Gogulski was also second in the 100 back this meet, swimming a time of 45.75. Both his 100 and 200 back times are well under the NCAAs cut line from 2021, and qualifying for national championships would make his comeback story from cancer even more special.

Absolutely love this story! Keep up the good work Ethan!

This kid is an inspiration! His Dad & Mom are awesome as well!! Congrats Ethan & keep gigging em👍👍👍

I have a question. Why is testicular cancer seemingly more prevalent in the swim community than other people?

There’s no evidence that it is. It’s probably an impact of one of two things:

1) You’re paying more attention to swimming than most industries
2) Swimmers (thanks maybe to Nathan Adrian’s lead) have done a good job of publicizing it and creating awareness.

It’s good that you feel this way, because that means that the awareness campaign is working. About 1 in 250 males will develop testicular cancer at some point in their lifetime.

And testicular cancer typically emerges in this age group, vs other cancers that usually come earlier or later in life.

Yep good observation. Average age of someone diagnosed with Tcancer is 33.

What an inspiration! Proud to call him my friend

So happy for you, Ethan! Congratulations!

First sub 1:40 200 backstroker with one testicle

And how do you know? Have you personally confirmed this? Just curious….

I personally confirmed it