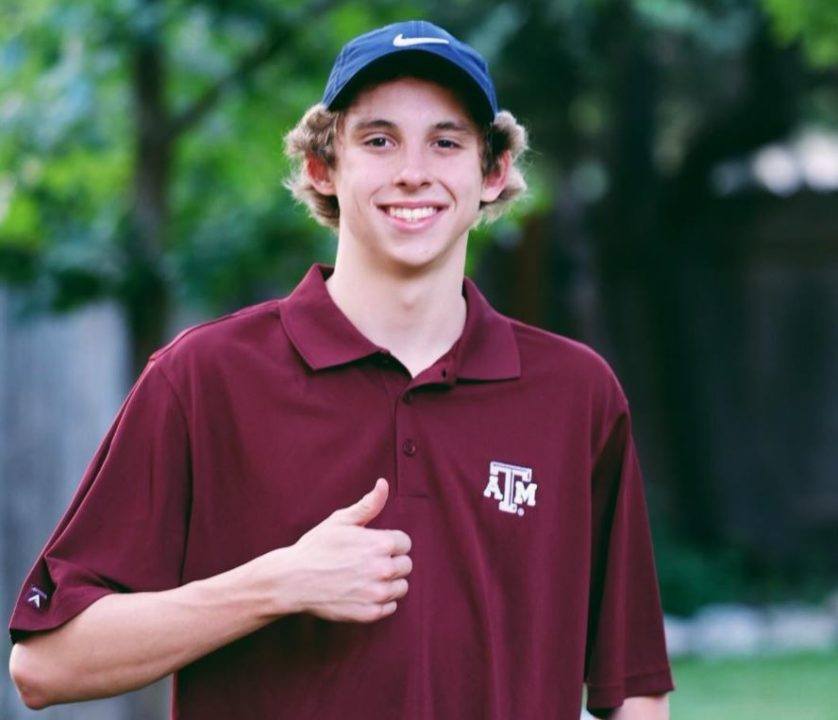 Texas A&M freshman Ethan Gogulski finished 9th in the 200 back at the 2019 SEC Championship meet, swimming a 1:41.35 to win the B-Final. That time ranks him 4th among all freshmen nationally and 23rd among all swimmers nationally: a result to be commended regardless of circumstance.

But for Ethan Gogulski, it’s an achievement made all-the-more impressive by the fact that it was done less than 2 weeks after being diagnosed with testicular cancer.

On Sunday, February 10th, Gogulski said he noticed something irregular in his testicles, and texted his dad, who is a physician, to ask him about it. His dad agreed with Gogulski’s concern, and helped him see a doctor to get a formal diagnoses. It turns out that that irregularity was stage 1 testicular cancer.

“I would’ve been happy with my performance either way,” Gogulski said via phone on Wednesday. “I dropped a lot of time this season, I was really happy with everything. But having the diagnosis 2 weeks before the meet and still being able to go and drop time…it was a cool thing and felt really good to know that I could overcome that emotionally.

“Nobody likes hearing the “Cancer” word, but right before a meet it’s really something that can psych you out.”

Gogulski said that the formal recommendation from both his doctor and his dad was to have the surgery to address the issue right away and then do his best to swim at SECs after the surgery. But Ethan felt that he had worked too hard, and knowing that the surgery would be painful, decided to push off the surgery for a couple of weeks and to swim at SECs anyway. He said that while the doctor’s formal recommendation was immediate surgery, that he also didn’t believe that there was any serious risk of the tumor metastasizing in the 2 weeks.

So Gogulski raced last week in Athens, swimming lifetime bests in both the 200 back as mentioned above and the 100 back, where he went 47.72. On Monday, he underwent surgery to remove the cancer, and while he’s still waiting on final lab results, he says that the surgeon’s report was positive.

Gogulski says that his short course season is probably over (he doesn’t think he’ll have time to get back in the water before a last chance meet to chase the last few tenths that he would need to earn an invite to NCAAs), but feels good about his decision.

He did get the chance to talk to 5-time Olympic gold medalist Nathan Adrian, who in January was also diagnosed with testicular cancer.

“We both agreed that it’s important to get checked out and that  it affects a lot more people than you’d think, even though still sort of a rare thing,” Gogulski said of their conversation. “I don’t think that it should be something that you’d be that embarrassed about. I don’t think that going to see the doctor about anything like that should be embarrassing. I was lucky that I had my dad to discuss it with, but everyone should be getting regular checkups. Health is important, and if you find something that’s a red flag, just go and get it checked out.”

“Nobody likes hearing the “Cancer” word, but right before a meet it’s really something that can psych you out.”

What a boss! That’s gotta be a hard pill to swallow and to put that aside for a week and focus on racing and your team….hats off man! #Courage Good luck going forward

SO very very proud of you Ethan!! Thank you for speaking up and reminding moms that have boys to tell them to check your testicles! Just like self breast exams boys need to pay attention to any changes at all!! We love you and are so proud of you!

Best wishes for the young man. If anyone has family or friends fighting cancer, I highly recommend an organization called Imerman Angels, which matches current patients with cancer survivors of the same cancer type for coaching and encouragement. Nothing like getting advice and advocacy from someone who has gone through the exact same thing.

Honestly one of the most impressive things I’ve seen in a while.

Damn. Nitro kid. Always goofy around pool and fun to be around. Our son loves him. Swims backstroke right way: tall, smart, with aggressive arms. Always liked to watch him swim it. He always loved swimming backstroke so much, I once DQ-ed him at the UT Swim Center meet because he continued swimming back for the breast leg of a 100 IM race. Happy for his swimming success and he will be fine.

To show your support, do the #ethanstrong challenge!! Take a video of you doing the stanky leg and post it online and nominate 3 people!

Shrey youre a silly goose