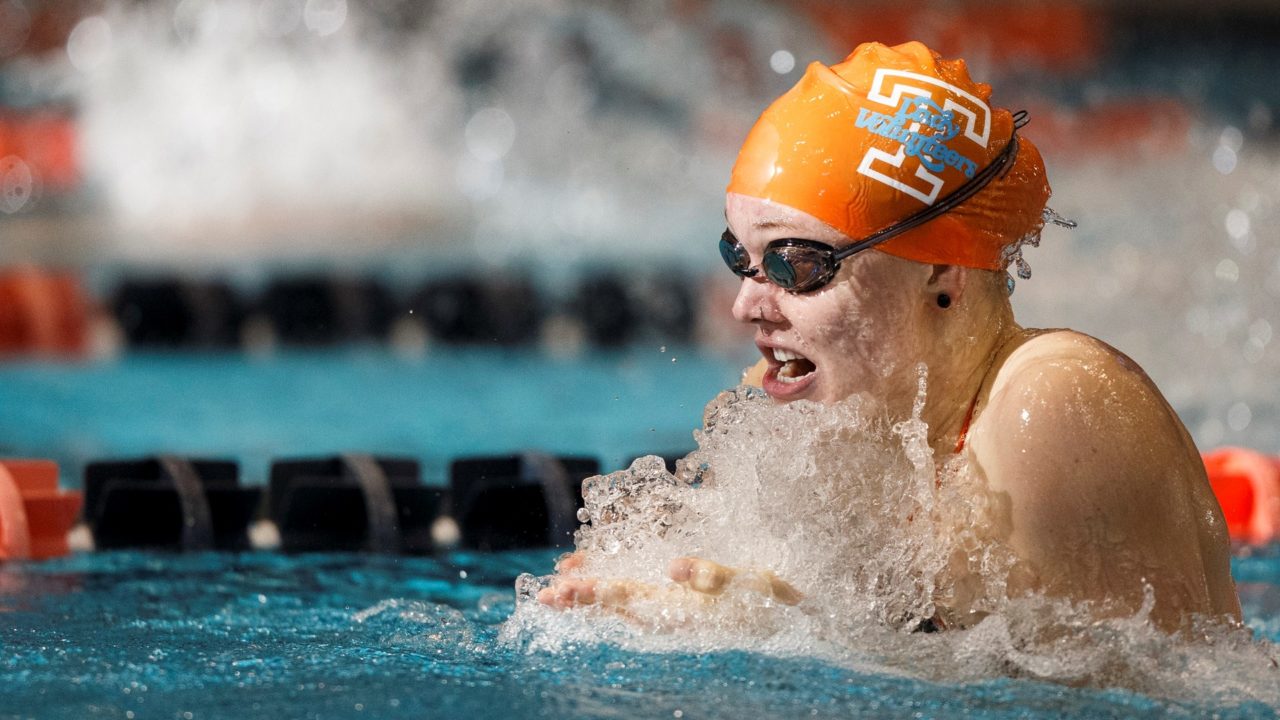 For most of the college swimming world, championship season is over. Team’s conference meets marked the pinnacle of their seasons.... Current photo via Tennessee Athletics

There are a few teams that likely haven’t fully rested yet. The Stanford women, for example. For them this analysis isn’t very useful. Their target meet is NCAA’s. However for the vast majority of division 1, that isn’t the case. Schools with only a couple of qualifiers are unlikely to see their numbers change significantly with the inclusion of nationals.

There were 6533 swims at women’s conference meets where the swimmer had a time in that event from a previous conference or nationals meet. Times were a median of .1% slower than previous season times. They were an average of .2% slower and the time change percentages had a standard deviation of 1.8%. Here’s the distribution of time changes:

Ohio led the way with median time drop of 1.2% on 42 swims. LSU were the top major conference team also with a median time change of 1.2% improvement. LSU had the highest proportion of swimmers that improved as 86% of their swimmers were faster. VMI and Holy Cross also had median improvements of 1.2%.

The Texas women were the second worst performing major conference team (median time add of .8%, only Nebraska was worse among power conference teams). With the weakness of their conference and with how many of their swimmers secured qualification before the conference season started, this probably will improve quite a bit once nationals times are included.

If we’re looking for clues about nationals, the Tennessee women jump out. They swam really well at SEC’s. They dropped a median of .9% on 35 swims. That would indicate they were all out at SECs, and probably don’t have much time left to drop at nationals. They are 4th on the scored psych sheet, so it will be worth watching if they can hold onto that position.

Every team in the division’s time changes are in the table below. If you want last year’s data for this metric that can be found here.

How about for DII?

Ignoring the Stanford-not-resting controversy, the line that jumped out and hit me over the head was the median/average time improvement year to year excluding freshmen is -.1%/-.2% (ignoring standard deviation). Is this accurate, normal and expected? I’m not questioning Mering’s methodology or data I’m just having trouble wrapping my head around the fact that these swimmers aren’t getting faster after their freshmen year.

Getting ready for my picks this year! Going to choose a lot smarter and not go off of your previews!

Every team I have ever coached produced best times across the board. My secret? If you don’t get a best time I verbally accost you until you quit.

Haha, y’all just cant sit back there at SwimSwam HQ and take a day off huh? These articles and stat reviews are interesting though… Keep it up, and enjoy your time off in a few weeks right after Men’s NCAA’s…. and yes y’all need to take some well earned time off.

This was a great article until I came across a line of b.s. I just couldn’t stomach even if it came straight from Meehan’s mouth. Stanford didn’t rest at all for its conference meet? Is this line of the article located in an alternative universe for what rest/tapor means? One could say they weren’t fully rested/tapered but most top programs, if they can, leave another level or layer (even if its psychological) for the final end season push. Stanford swam quite well at pac 12s; really fast as other articles have noted. They’re not superhuman (except for Ledecky and she’s graduated) where they don’t rest at all and other teams rest fully and then they dominate. No doubt, as a… Read more »

The NC State men will try to claim the same thing… could they both be right? maybe… but just the nature of a conference meet will involve some rest… so I agree with you. Do not say they had zero or no rest.

You can tell who rested and who didn’t. Tankersly and Pitzer obviously rested. Forde and Drabot not so much. Eastin and Howe previously both set AR at conference and then added time at NCAAs so how do they claim they werent rested for conference. Hansson from USC flat out stated she didnt rest at all for conference after her AR. Go figure.

Was C-USA not included?